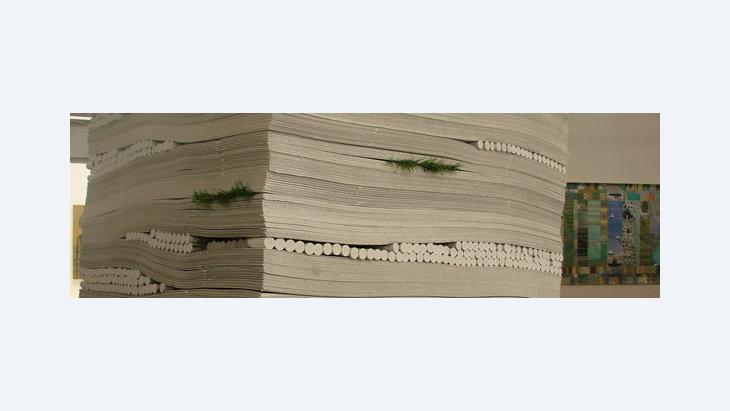 Between Dreams and Violence

Lebanese artists seem to have only one theme in mind these days: war and violence. That comes as no surprise, seeing as most of those painting today grew up in one of the bloodiest chapters of Lebanese history. Kersten Knipp reports

There she is, spread out before our eyes: the lovely, lively city, home to thousands of rooftops, walls and parapets, to mosques, palaces and plazas. This is what the ideal oriental town might look like, a setting for bustling activity and yet exuding a magical tranquillity. Immersed in a silvery white play of colours, enveloped in mild sunlight, there she lies, this city of dreams, this "Fantasy Village", as the artist Jamil Molaeb dubbed his 2011 painting.

It might very well depict Baysour, the Lebanese mountain village where Molaeb was born in 1948. Images of a childhood, the product of memory and – as the title hints – of imagination. It is in any case an idyllic scene and, therefore, something of an exception on the contemporary Lebanese art market. Most artists these days rely on a wholly different aesthetic, one that focuses on war and violence.

"A history of violence"

Perhaps nothing else is possible. "Most young artists today were born in the days of the Lebanese civil war," explains Saleh Barakat, director of the Beirut gallery Agial. "They grew up in its midst and were exposed to its violence. The war therefore naturally shaped this generation of artists." 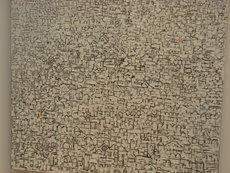 "Fantasy Village" by Jamil Molaeb. The aesthetic of violence and war: some critics feel that in focussing so much on these themes in their work, Lebanese artists are not only highlighting the traumas of Lebanon's civil war, but also serving the international art market

​​Is a Lebanon without violence even conceivable? It seems not, at least according to the two artists Issam Barhouch and Zena Assi, born in 1972 and 1974. In "Beirut One by One" they have created a deceptive work whose beauty is only skin-deep.

Countless paper strips are piled up on top of one another, representing Beirut's layers of history, the political and cultural orders that have accumulated and succeeded one another here over the long course of history in a city that always opened itself so generously to the Mediterranean and its seafarers. Shreds of artificial turf peek out from behind the paper strips here and there, symbolising the eternal, natural rhythms in which the city (also) partakes. And yet, the city is just as familiar with entirely different rhythms – the rhythms of violence that regularly shake it to its foundations.

This is why it is not only grass that sprouts out from between the layers of paper; cartridges have also pushed their way in between them. Real cartridges, the kind used in every war, guaranteed deadly, but here transformed into elements of an artwork. These are the insignia of an endless "history of violence" whose last chapter was the war between the Hezbollah and Israel, which reduced parts of the city to rubble. Now, the artists might have occasion to add still further layers to their artwork. At any rate, the rockets that once again went flying in the direction of Israel at the end of November bode nothing good.

"Rebirth" was the name chosen for a large-scale exhibition of contemporary Lebanese art that took place in summer 2011. But just how long this positive upswing will persist is anything but certain. War and violence hence remain central themes in contemporary Lebanese art. "The young artists are trying to express what it's like to live in today's Lebanon, in today's Beirut," explains Saleh Barakat. "They translate their experiences into a personal artistic form. Naturally they portray things in accordance with their own biography, and that inevitably leads to images of violence."

And this brand of violence is a booming business. In April of this year, a painting by the artist Ayman Baalbaki, born in 1975, was sold by the Dubai branch of Christie's for US$ 206,500. The auction house had estimated its value at US$ 50–70,000. Titled "Let a Thousand Flowers Bloom", the picture shows a brooding young man whose face is largely concealed by a Palestinian scarf. The kitsch flowers in the background do nothing to brighten his expression. And how could they? They are powerless frills in the face of an enduring tradition of warfare. Violence has long since developed into its own culture here, one that still monopolises some people's lives.

That the aftermath of this war has yet to be overcome is demonstrated in the pictures by photographer Dalia Khamissy as well. At the Menasa Art Fair this summer, she exhibited images of people who are still suffering today from the after-effects of war. For example, a picture of an old woman who has nothing left of her four sons but a few souvenirs. The sons themselves are dead.

"The oldest was 31, the youngest 13", notes Khamissy. "Um Aziz, their mother, has kept a few of her sons' personal belongings, small, quite insignificant things. These are all that's left of them. Many Lebanese people are in the same situation. They want to know what became of their children and where they can find their mortal remains."

The war as an art fetish?

War and art. Is this really such a compelling equation? Two years ago, the Lebanese architect Bernard Khoury already commented that contemporary artists were elevating war to the status of a fetish and were hence in line with the "neo-colonialist" notions of the West.

In his opinion, artists were portraying their war experiences partially because this was what was expected of them in the West, where the important galleries, curators and collectors are located. "P.O.W." – "Prisoner of War" is what he called a 2008 installation in which Khoury demonstrates not the power of war, but the power wielded over Lebanese artists by the market and its interest in depictions of war.

Similar views have been voiced by French curator Catherine David. The aestheticisation of war in these days of (ostensibly) critical portents is a global phenomenon, she says. "This is all about fetishes. That goes for many young markets where not much money is circulating yet." The market first sought out depictions of sombre realities by African and Chinese artists. "Now it's the Arabs' turn. Certain subject matter is expected of them: violence, war, dictatorship – and now the Arab Spring."

Market pressure on the one hand, and attempts at coming to terms with the past on the other: contemporary Lebanese art is oscillating between these two poles, at least in the large sector addressing the civil war and its consequences. The artists are unable to avoid attracting a certain voyeurism, which would actually be a good reason for putting more "Fantasy Villages" on canvas.

They’ve already got the Louvre; they’ll soon have a Guggenheim Museum as well – and now the Emirates have added literature to their quest for cultural supremacy in the Arab world ... END_OF_DOCUMENT_TOKEN_TO_BE_REPLACED

The rollout of coronavirus vaccines in the Middle East and North Africa is already taking place on a massive scale, with the United Arab Emirates leading the way. Nevertheless, ... END_OF_DOCUMENT_TOKEN_TO_BE_REPLACED

A childhood and youth in Beirut, a life lived between Lebanon, Switzerland and Germany, and a unique voice in Arabic-language literature: "Beirut für wilde Mädchen" sees Lebanese ... END_OF_DOCUMENT_TOKEN_TO_BE_REPLACED

Surging coronavirus cases in many parts of the world have overshadowed the start of this year's Muslim holy month of Ramadan, with festivities once again curtailed by contagion ... END_OF_DOCUMENT_TOKEN_TO_BE_REPLACED

German Middle East analyst Guido Steinberg and television journalist Ulrich Tilgner have both published new books on the conflicts in the Middle East. Their analyses and their ... END_OF_DOCUMENT_TOKEN_TO_BE_REPLACED
Author:
Kersten Knipp
Date:
Mail:
Send via mail

END_OF_DOCUMENT_TOKEN_TO_BE_REPLACED
Social media
and networks
Subscribe to our
newsletter