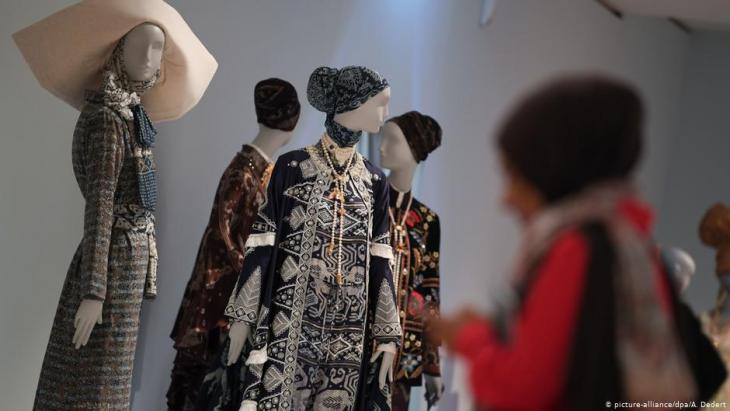 Frankfurtʹs Museum for Applied Art is currently hosting an exhibition on Muslim fashion. Heavily criticised for going ahead with the show, curator Matthias Wagner K explains how political fashion can be. Interview by Stefan Dege

Mr. Wagner K, you have been marketing this exhibition as a purely fashion event. But is it really?

Matthias Wagner K: In the first instance, yes indeed. It showcases the phenomenon of contemporary Muslim fashion, which is also known as "modest fashion" – that is, "less body-oriented" and more "discreet", even if in many respects it is not. What makes the exhibition unique is that it focusses on current interpretations of Muslim fashion, which are diverse and subject to a range of regional influences around the globe. And it shows how Muslim women are realising their own visions of what "modest fashion" can mean. It is a global phenomenon.

And yet there are countries where veiling and concealing the female form is not perceived as liberation. How do fashion and women's rights fit together?

Wagner K: I share the opinion of the exhibitionʹs initiator Max Hollein, who holds fashion to be the exalted expression of a cultural state. The show does not ignore the issue of women's rights. On the contrary, there are many photographs and contributions by women artists such as Shirin Neshat that explicitly address the oppression of women who, if they resist these dress codes, have to fear for their lives or for their well-being.

An exhibition in Frankfurt caused a stir even before it began. That's not because of the clothes on display, but because of the questions it raises: Do veils and women's rights go together? By Stefan Dege 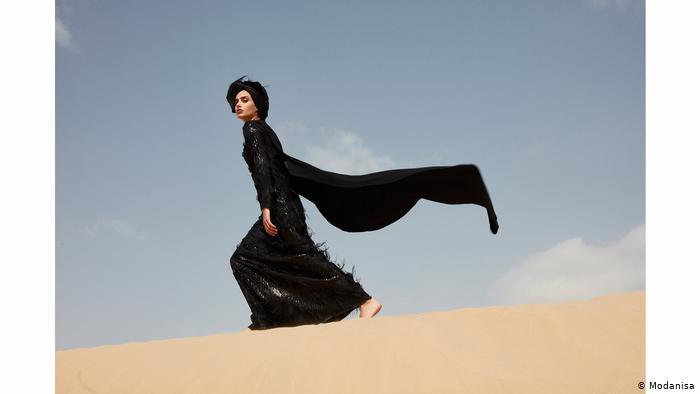 Market worth billions: "modest" is the name given to fashion for Muslim women, which means "modest", "discreet" or "less body-oriented". The market for Muslim fashion is worth a hefty 44 billion dollars a year. Labels from all over the world want a piece of the cake. Our picture shows Rasit Bagzibagliʹs "Desert Dream Collection" for "Modanisa" 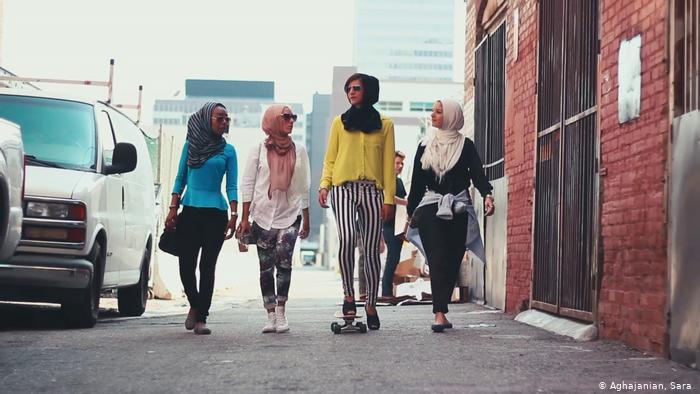 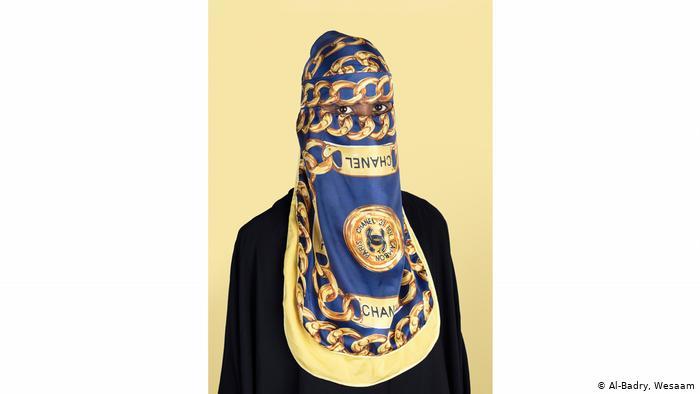 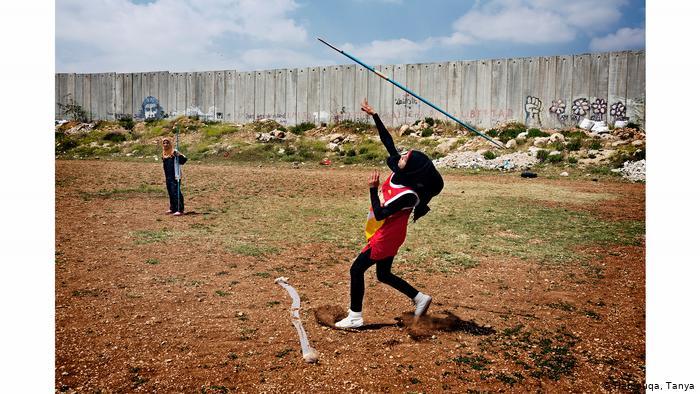 Fashion controversy: from haute couture to streetwear to sportswear, the exhibition in Frankfurt's Museum fuer Angewandte Kunst (Museum for Applied Arts) focusses on the phenomenon of contemporary Muslim fashion. Even before its opening, the show, which comes from San Francisco in the USA, had already begun making waves. Our picture shows young Muslim women throwing javelins in the West Bank 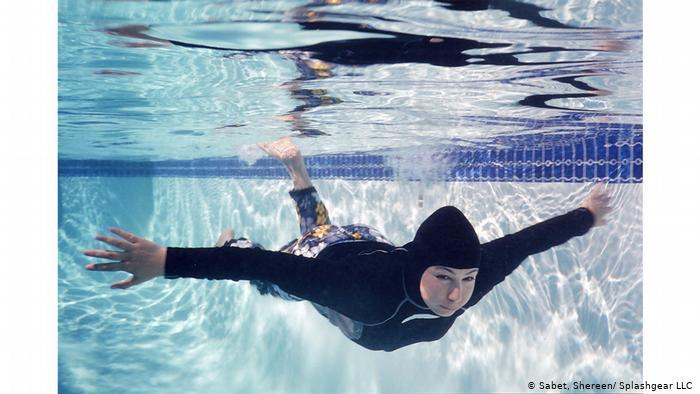 Strict controls: body scans and bag checks just like at the airport – security precautions at the entrance to the museum are strict. And apparently also necessary: the museum curator has received threats. Feminists protested that the exhibition would only be acceptable if the image of a stoned woman were shown. That alone reveals how political the exhibition is. In the picture: a Muslim woman in a hijab swimsuit 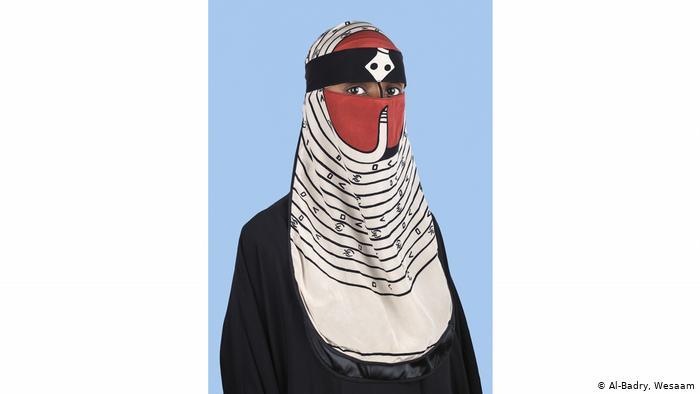 A sense of foreboding: exhibition initiator Max Hollein expected massive criticism when the exhibition opened in San Francisco in the autumn of 2018. He suspected he might be accused of paying homage to fashion that celebrates the oppression of women. But then the public focus switched to Trump's ban on Muslim nationals. A wave of criticism has hit Hollein's colleagues in Frankfurt instead 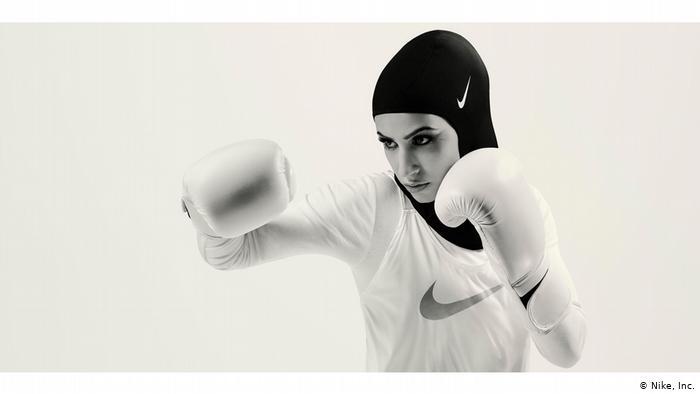 Fashion meets politics: major sporting goods manufacturers are also major players in the Islamic fashion business. The picture shows a boxer in a Nike full body outfit. The exhibition also addresses the topic of Islamophobia: the first amendment of the U.S. Constitution is printed on a bomber jacket in Arabic script. It guarantees freedom of religion 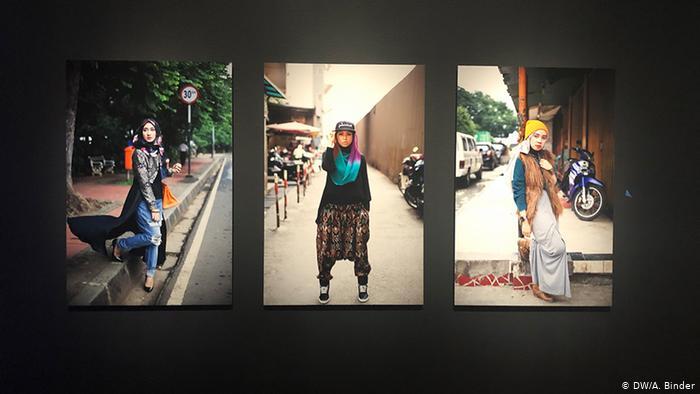 Fashion on Instagram and co.: countless bloggers, influencers and fashion magazines are dedicated to the Muslim fashion world. On Instagram, so-called "hijabistas" celebrate the traditional headscarf as a fashion must-have. This aspect is also addressed in the exhibition "Contemporary Muslim Fashion", which will run in the Museum fuer Angewandte Kunst in Frankfurt until 1 September

Women's rights activists have accused you of trivialising Islamic dress codes as a fashion trend?

Wagner K: Not one exhibit included in the show references such dress codes. You wonʹt find a single burka. And any references to burkas are couched in critical, artistic contributions or street photography. On the contrary, the exhibition shows a lot of young women who dress very self-confidently and self-determinedly in modest fashion, with hijab or not. What we are presenting is a completely new image of Muslim woman which has nothing to do with the conventional stereotypes.

Such strict dress codes do not exist in Germany. What is your position on the keyword "veiling female bodies"?

Wagner K: Of course such regulations need to be fought against. We must fight for freedom and self-determination. But what this also means is that a Muslim woman, if she is self-determined, may dress the way she chooses. With that I donʹt mean wear a burka. I am actually convinced that no woman would voluntarily choose to wear one, were it not for reprisals, menʹs patriarchal attitudes, oppressive structures and the like. 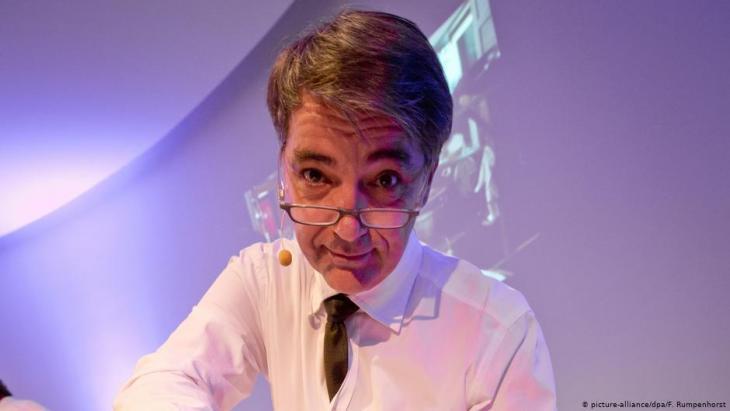 Matthias Wagner K of Frankfurtʹs Museum for Applied Art: "the show does not ignore the issue of women's rights. On the contrary, there are many photographs and contributions by women artists such as Shirin Neshat that explicitly address the oppression of women who, if they resist these dress codes, have to fear for their lives or for their well-being"

You received threats and harsh criticism in the run-up to the exhibition. Are you afraid?

Wagner K: We need to take such threats, which often take the form of very personal hate mails, extremely seriously. Security checks are being carried out at the entrance of the museum to ensure the safety of visitors. This is a situation that is utterly new to us. On the other hand, if I want to visit the Photography Foundation at the European Central Bank (ECB), I have to undergo a body scan. If I want to attend a football match, I get checked.

The huge number of hate mails we received has also revealed something else: Muslims are most at threat here in Germany from those who wish to exclude them from society on the grounds of their faith. This is an issue, which I believe, needs to be examined more closely. After all, by addressing the most diverse social problems – gender, identity, sustainability – fashion can never be completely apolitical.

Home
Print
Newsletter
More on this topic
Viennaʹs Ethnological Museum: "Veiled, unveiled! The headscarf"The history of the hijab: The headscarf is not the headscarfQantara photo essay: Muslim fashions: modern yet modest
Related Topics
Art, Islam in Germany, Islamic lifestyle, Muslim women, Muslims in the West, The Headscarf Controversy
All Topics

Some companies in Germany are reluctant to hire Muslims. But it is not only the Muslim applicants who are losing out, so too are the companies. After all, there are multiple ... END_OF_DOCUMENT_TOKEN_TO_BE_REPLACED

The European Court of Justice has given its backing to companies that don't allow female Muslim staff members to wear headscarves – as long as they don't permit the wearing of ... END_OF_DOCUMENT_TOKEN_TO_BE_REPLACED

Ayaan Hirsi Ali’s new book "Prey" claims to examine how Muslim immigration threatens the rights of Western women. Indeed the injustices women face only seem to matter to her when ... END_OF_DOCUMENT_TOKEN_TO_BE_REPLACED

The Saudi national team is set to play the German Olympic squad at the Olympics in Tokyo later this month – a chance for the outsiders to make their mark. At the same time, and ... END_OF_DOCUMENT_TOKEN_TO_BE_REPLACED

I regret very much that I worked for the Bundeswehr. If the Taliban knock on my door, I hope they shoot me right away. Guest article by Ahmad Jawid Sultani END_OF_DOCUMENT_TOKEN_TO_BE_REPLACED

END_OF_DOCUMENT_TOKEN_TO_BE_REPLACED
Social media
and networks
Subscribe to our
newsletter