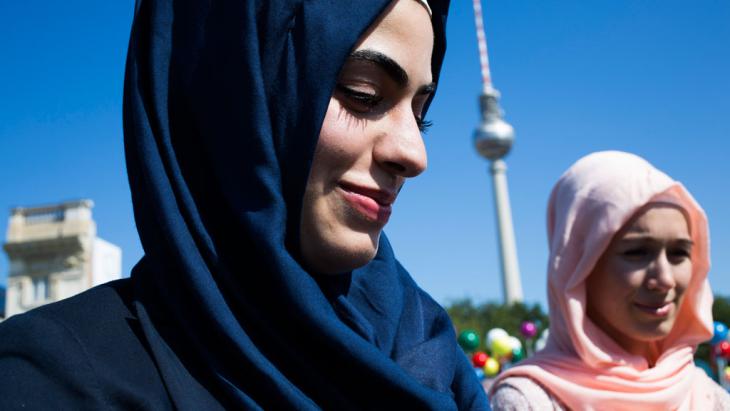 The last gasp of archaic masculinity?

One in every two people in Germany believes that Islam is not part of German society. Until this attitude changes, the Islam we see in the evening news and not the actual reality of Islam in Germany will remain for many the genuine face of Islam. In this essay, Charlotte Wiedemann takes a closer look at Muslim women in Germany and shows how drastically they differ from the prevailing image of Islam in this country

It's high time we talked about women, about young Muslim women in Germany. I'm making them here into instruments of my intentions – just as others, with other intentions, pick out theirs.

It's high time we talked about modern young women, because from the point of view of most people in this country, Islam has once again been coated with a cement-hard varnish of the archaic.

That historic moment at the start of the Arab Spring when people thought that Muslims were capable of something emancipatory is long gone with the wind. Now, brutal, male violence is the face of Islam, its television face. It is a world of extremes, of nightmarish scenes and mediaeval crimes perpetrated exclusively by men, perpetrators with sharp contours. The rest is like a photographic backdrop, a backdrop of women and children, of blurred outlines, wafting scarves and tousled, dusty children's hair.

The desert and bush atmosphere

When the German political magazine "Cicero" posed the question: "Is Islam evil?", its front cover featured a blue burqa with a white dove of peace trapped behind the gauze-covered opening. So in this religion, the bondage of women and belligerent violence form a unit, and the misogyny of Islam is an integral part of its evilness. 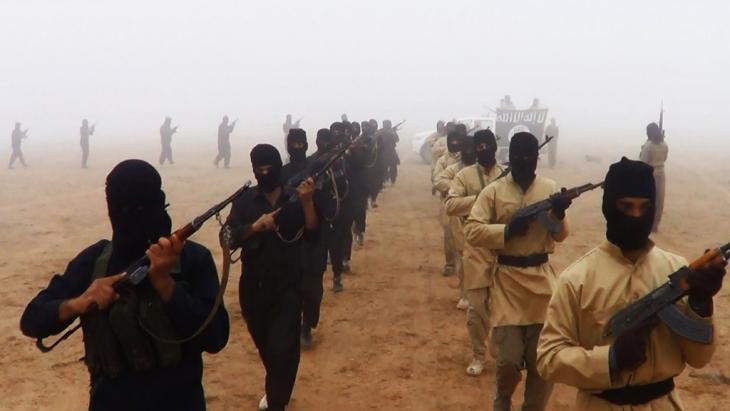 The image of Islam we see on our television screens on a daily basis: "Now, brutal, male violence is the face of Islam, its television face. It is a world of extremes, of nightmarish scenes and mediaeval crimes perpetrated exclusively by men, perpetrators with sharp contours," writes Charlotte Wiedemann

This graphic metaphor is not totally off the mark. Like all violent processes, war and civil war serve to bolster the patriarchy. But, the same also applies to Congo or Ukraine. However, the latter lacks the desert and bush atmosphere that is so essential for an authentically archaic effect. Apart from that, sharply contoured masculinity is in evidence here too: men in black masks against a pale feminine background.

As far as Islam is concerned, I would like – for the sake of variety – to talk about women as the active parties, particularly as this concerns a phenomenon that's happening right on our doorsteps: the dominance of women in the new Muslim activism.

Recently at the federal conference of "Zahnräder" (Cogs), a network of Muslim academics promoting social entrepreneurship, 90 per cent of those present were women; most of them wore headscarves. "Ask yourselves the question: what does success taste like to me?!" cried the facilitator, who works in England for Facebook.

At "Cogs" conferences, participants pitch their project ideas to the audience hoping to win their favour and ultimately the cash for their start-up. Social élan is important; the young women evidently have more of this. One candidate, who aimed to put certified halal food on the shelves of major supermarkets, explained her project thus: "We work all day and we also do other things, there's simply no time for housework."

At the new Avicenna scholarship programme, which supports Muslim students and doctoral scholars, more women applied than men. This comes as no surprise to those familiar with the milieu. The recent impetus to a network for prospective Muslim teachers also came from women. A ruling on the constitutional viability of the headscarf ban for female teachers is expected this autumn, and veiled women are no longer acquiescing in the face of this professional discrimination.

For several years now, Muslim women have been drawn to Islamic Studies, a discipline that does not otherwise enjoy a good reputation among the devout, because it is suspected of Orientalism. The degree forces young women to view themselves through the eyes of others and develop a distance to questions of faith, without distancing themselves so far from the faith for the sake of a good mark that it would seem like a betrayal to themselves. It is a balancing act. Perhaps tightrope walking is more of a feminine thing. 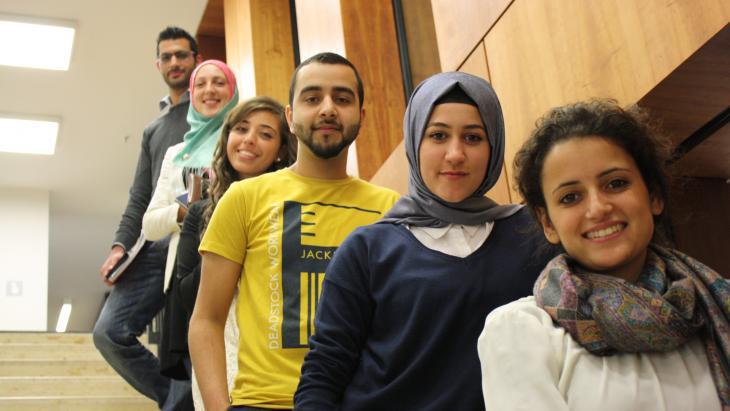 The Avicenna scholarship programme in Osnabruck grants scholarships to young, talented Muslim students and doctoral scholars. According to Charlotte Wiedemann, more women applied to the programme than men, which is not as surprising when one considers how active Muslim women now are in German society

In Islamic associations, which are concerned with power, men continue to dominate; in civil society and the youth organisations, it is the women who dominate. Why is this so? Muslim women who cover their heads make themselves visible and vulnerable; they feel more pressure than men and have a stronger motive to change the society in which they live.

There is, however, another, possibly more important reason: ambition. Professional, academic ambition, which is already just a minor feature in the German image of women. And now, the preference is to ignore the ambitions of a new generation of Muslim women, so that they continue to fit into our mental image of integration, of the woman in an ill-fitting coat and with a bunch of parsley in her shopping bag. Just like I said: blurred contours.

As long as one in every two people in Germany believes that Islam is not part of German society, the foreign Islam, the Islam in the evening news, will always remain the actual and genuine Islam. The IS Caliph is not only more powerful than the female Muslim doctoral student in the house next door; he is more real.

The feminisation of Islam

Seven years ago, Youssef Courbage and Emmanuel Todd, both researchers at the Institut National d'Études Démographiques in Paris, wrote a book entitled "A Convergence of Civilisations. The Transformations of Muslim Societies Around the World". They based their theories first and foremost on women and argued that improved female literacy rates and the ensuing decline in the birth rate are acting as a motor for the process of modernisation.

From Indonesia to Iran, women are winning greater rights and freedoms, the likes of which their grandmothers would not have even dared to dream about. All over the world, Islam is becoming more feminine, even though our evening news bulletins seem to tell us otherwise. The caterwauling of the caliphate is also an attack on a modern gender age that has taken hold anywhere where life is not dictated by those in possession of arms. It is quite possible that we are experiencing the last gasp of archaic masculinity.

Incidentally, it is not easy for an active, educated and ambitious Muslim woman in Germany to find an acceptable partner. The phenomenon is similar in Muslim majority societies such as Oman or Malaysia, where girls already outpace the boys at school. A man who dares to enter a network where women dominate qualifies as a potential suitor – criteria that are further removed from the IS Caliphate than the armchair from the television set.

Charlotte Wiedemann is a freelance writer best known for her literary reportages from the Muslim world. Her latest book, published this month by Pantheon Verlag, is titled "Mali oder das Ringen um Würde. Meine Reisen in einem verwundeten Land" (Mali or the Struggle for Dignity. My Travels in a Wounded Nation).

Among the 24 squads at the Euros, dozens of players with African roots will turn out in the June 11-July 11 tournament. Several of them are top names at this pan-continental event ... END_OF_DOCUMENT_TOKEN_TO_BE_REPLACED

Reading Hassan Blasim's God 99 is an immersive experience of grief and exaltation, anger and disgust, writes Marcia Lynx Qualey. We join the Iraqi narrator as he sits around in ... END_OF_DOCUMENT_TOKEN_TO_BE_REPLACED

Turkey's parliamentary and presidential elections are scheduled for June 2023. But they are already casting a shadow. While the opposition is calling for early elections, ... END_OF_DOCUMENT_TOKEN_TO_BE_REPLACED

Recep Tayyip Erdogan, disappointed by the European Union’s reluctance to integrate Turkey into its ranks, has re-directed his country’s diplomacy toward the Maghreb and Africa to ... END_OF_DOCUMENT_TOKEN_TO_BE_REPLACED

A law is currently being debated in Morocco that would legalise the cultivation and export of medicinal cannabis. For many small farmers, this would bring considerable advantages ... END_OF_DOCUMENT_TOKEN_TO_BE_REPLACED
Author:
Charlotte Wiedemann
Date:
Mail:
Send via mail

END_OF_DOCUMENT_TOKEN_TO_BE_REPLACED
Social media
and networks
Subscribe to our
newsletter