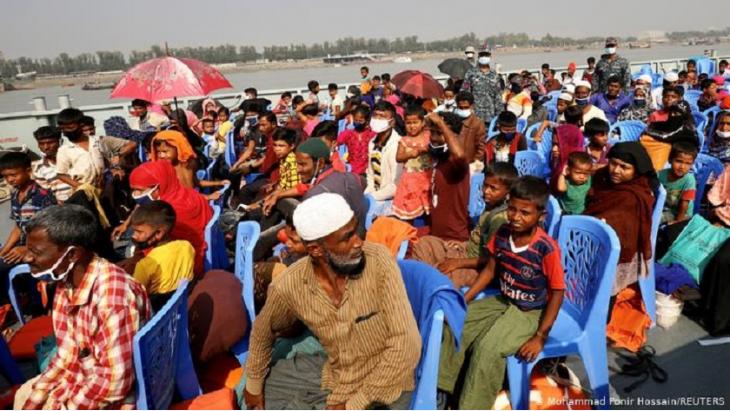 Authorities in Bangladesh started sending a first group of more than 1,500 Rohingya refugees to the isolated island of Bhasan Char, despite calls by human rights groups for a halt to the process.

Bangladesh says it is only moving refugees who are willing to go and that this will ease chronic overcrowding in camps that are home to more than 1 million Rohingya, members of a Muslim minority who have fled neighbouring Myanmar.

"The government is not taking anyone to Bhashan Char forcibly. We maintain this position," Foreign Minister Abdul Momen commented to reporters.

More than 300 refugees were brought to the island earlier this year after several months at sea in an attempt to flee Bangladesh. Refugees and humanitarian workers say some of the Rohingya had been coerced into going to Bhashan Char, a flood-prone island that emerged from the sea 20 years ago.

Refugees International said the move was "nothing short of a dangerous mass detention of the Rohingya people in violation of international human rights obligations".

Aid workers said refugees had come under pressure from government officials who used threats and offers of cash and other enticements to persuade them to go to the island. The United Nations said it had "limited information" about the relocations and was not involved in preparations.

An 18-year-old woman said her husband had put their names on the list thinking it was for food rations. He fled when they were told to go to Bhasan Char, she said, adding that she is also hiding in the camp.

Three years ago, a military operation in Myanmar destroyed entire Rohingya Muslim villages. UN investigators say as many as 10,000 people were killed and more than 730,000 Rohingya fled the massacre for Bangladesh, calling it "textbook ethnic cleansing."

Global heating is driving domestic migration in Bangladesh, which sits just above sea level. With a population of 160 million, it is the most densely populated nation in the world ... END_OF_DOCUMENT_TOKEN_TO_BE_REPLACED

As Qatar prepares to host the 2022 FIFA World Cup, the country has come under fire for its treatment of migrant workers, with some nations calling for a boycott of the contest. ... END_OF_DOCUMENT_TOKEN_TO_BE_REPLACED

Urban transport concepts in the global South, often promoted by organisations such as the World Bank, aim to encourage motorised private transport – at the expense of non- ... END_OF_DOCUMENT_TOKEN_TO_BE_REPLACED

Tents, mud and cold: refugees contend with miserable conditions in Bosnia & Herzegovina. With the European Union demanding that Bosnia accommodate the asylum-seekers, its ... END_OF_DOCUMENT_TOKEN_TO_BE_REPLACED

French President Macron's statements that caricatures of Muhammad may still be published have triggered outrage in a number of Muslim states. Turkish President Erdogan is among ... END_OF_DOCUMENT_TOKEN_TO_BE_REPLACED

With the first COVID-19 case having been detected in the Kutupalong Rohingya refugee camp in Bangladesh, aid agencies are warning that without additional resources, there will be ... END_OF_DOCUMENT_TOKEN_TO_BE_REPLACED
Date:
Mail:
Send via mail

END_OF_DOCUMENT_TOKEN_TO_BE_REPLACED
Social media
and networks
Subscribe to our
newsletter