Emotions are running high in Turkey due to a new television series that supposedly paints an embarrassing picture of the private life of Ottoman Sultan Suleiman I, thus tarnishing the image of the Ottoman Empire. Jürgen Gottschlich in Istanbul has the details

Ruler during the heyday of the Ottoman Empire in the sixteenth century and the subject of a controversial television soap opera: Sultan Suleiman the Magnificent

​​They came equipped with drums and dressed as Janissaries. Hundreds of demonstrators, mobilised by the Saadet Party, gathered outside the gates of the private television network Show TV and loudly demanded that a newly launched television series be taken off air. Muhtesem Yüzyil (in English "The Magnificent Century") is currently the most hotly debated series on Turkish television.

In no other era was the empire as powerful, never was it larger than in the sixteenth century, when Suleiman's troops first conquered Budapest and then laid siege to Vienna. This heritage is nothing to laugh about. Its critics are calling the series "inappropriate", "disrespectful", "impertinent", "stupid" and, to make matters worse, "historically incorrect", saying that it consequently has no business being broadcast on Turkish television.

This is the opinion not only of conservative demonstrators on the street, but also of Deputy Prime Minister Bülent Arinc, who publicly announced that he would wield his authority to try to stop the broadcasting of the harem soap opera. The state-run Radio and Television Supreme Council (RTÜK) was convened without delay.

Prime Minister Recep Tayyip Erdogan warned that the law allows the head of state to ban a show from television in an emergency, whereupon RTÜK immediately notified the makers of the series that they could expect sanctions should they fail to show consideration for "society's sensibilities". And the makers did show consideration.

In the second episode (a 90-minute episode is broadcast each week), all of the kissing scenes were cut before the film was broadcast. But what exactly is all the fuss about? Muhtesem Yüzyil is not exactly a series that censures the Ottomans or exposes them to ridicule.

​​The film is an insipid love story that uses the Ottoman Empire as a backdrop for a story of jealousy and intrigue. Viewers love it. The series is a huge hit that brought its producers spectacular ratings last Wednesday. Half the Turkish population was glued to their TV screens, waiting breathlessly to see how the notorious Roxelana, who is named Alexandra in the film, manages to reel in the sultan.

In view of such overwhelming interest, a ban is no longer likely, even if the series continues to unfold more in the harem than on the battlefield, and the sultan continues to indulge in wine.

Nevertheless, the film is still a good indicator of the cultural battle currently raging in Turkey. If the controversy over the soap opera seems almost laughable, elsewhere there is greater cause for concern.

The debate over the film had just gotten underway when Prime Minister Erdogan added further fuel to fire. During a visit to the city of Kars in the remote eastern reaches of the country near the Armenian border, he discovered a monument that met with his disapproval.

The object in question is a 35-metre-high sculpture by the German-Turkish sculptor Memet Aksoy showing two half-figures approaching each other. They are meant to symbolise the rapprochement between Turks and Armenians after nearly a century of division. Erdogan referred to the sculpture – a monument to reconciliation – as a "monstrosity", demanding that it be removed from the cityscape. 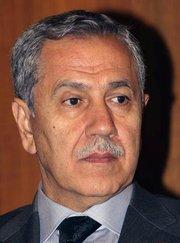 Bülent Arinc, deputy head of state, publicly threatened to take government action against the soap, which Islamists and those nostalgic for the Ottoman era claim is a base betrayal of a great past

​​A head of state who sets aesthetic standards, instructing the mayor in charge, a member of his party, to see that a work of art is removed? And a deputy head of state who wants to have a television series cancelled? The freedom the AKP government touted for so long now seems to have been forgotten.

It appears that they were right all along, the critics who long claimed that the freedom meant by the Turkish ruling party AKP is only the freedom to act in its own interests – for example by abolishing the headscarf ban at universities and schools.

The fact that tolerance is suffering a similar fate is also demonstrated by a new law scheduled to come into force in the coming days, representing another chapter in the cultural battle between the Islamic majority and secular minority: in future, not only will all advertising of alcohol be banned, but also the offering of drinks at exhibition openings in galleries or at theatre premieres.

Contemporary Turkish Cinema
Plenty of Light, Plenty of Shadow
Turkish cinema is currently experiencing a boom – local films are beating Hollywood productions in the market, and the films are dealing with new, controversial topics. All the same, the bright surface of modern Turkish cinema hides the same old rickety chassis. By Amin Farzanefar

Turkish Cinema
The Mirror of Social Change
Today's modern Turkish film industry - multi-faceted, complex, innovative, is also home to a new wave of directors whose films no longer shy away from the politically or socially sensitive. Amin Farzanefar takes a front-row seat

"Kanal Avrupa"
Television as a Bridge
"Kanal Avrupa" is a Turkish television station founded in Germany a few years ago offering a diverse program primarily for the Turkish community in Germany. Now the station will be adding a German-language program. Alexandra Jarecki reports

Düzgün TV
Integration via Satellite TV
The topic of integration is ever-present on German television. But Many German Turks are not tuning in to these channels. Many of them receive their television via Turkish-language satellite from Turkey. Now, however, Düzgün TV, a private television station in North Rhine-Westphalia, wants to change this. By Petra Tabeling

END_OF_DOCUMENT_TOKEN_TO_BE_REPLACED
Social media
and networks
Subscribe to our
newsletter