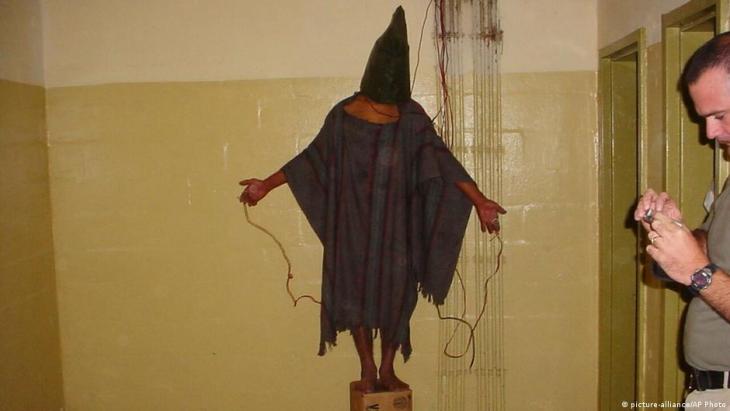 A French artist has used photos of torture from Abu Ghraib for an oversized artwork at the Berlin Biennale. Reactions from fellow artists have been mixed, with some criticising and others praising the work. Christine Lehnen reports

In an open letter, 15 signatories have criticised an artwork by French artist Jean-Jacques Lebel that is currently on display at the Hamburger Bahnhof Museum in Berlin as part of the international Berlin Biennale art show. Visitors enter a room arranged as a maze of horror in the museum's Rieckhallen section where Lebel has hung huge photographs of tortured and humiliated Iraqi prisoners at the Abu Ghraib prison – pictures that were taken by the U.S. soldiers who had tortured them.

Victims not asked for permission

Rijin Sahakian, who had loaned out one of the works showcased at the exhibition, is a signatory to the open letter that criticises the Biennale's exhibition of the work for using "photographs of unlawfully imprisoned and brutally treated Iraqi bodies" under U.S. occupation. They were used, the letter argues, for commercial purposes without the consent of the victims and without the feedback of the Iraqi artists participating in the art show, whose works were installed next to the controversial work without their knowledge. 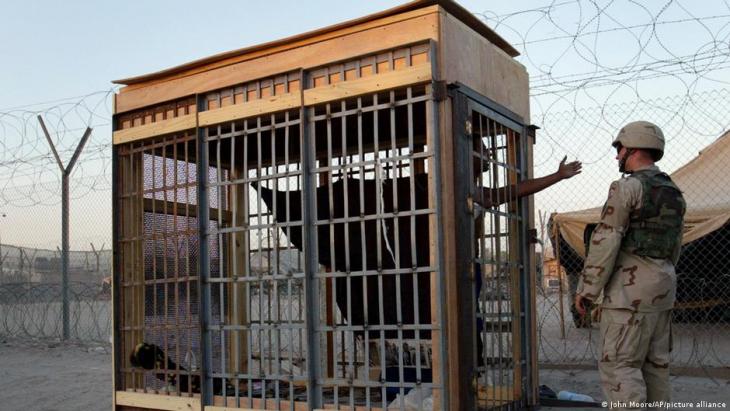 Artist Jean-Jacques Lebel offered this explanation of his work: “I have printed and enlarged the colour snapshots taken by the torturers, interspersing them with black-and-white press images of Iraqi towns devastated or completely obliterated by the US Air Force (no inhabitants survived these bombings – George W. Bush declared Operation Iraqi Freedom a success before a giant banner that read ‘Mission Accomplished.’) The aim of this project is to provoke the viewer to meditate on the consequences of colonialism”

At the time of publication, the curatorial team of the Berlin Biennale had not yet publicly commented on the allegations, but announced it will release a statement soon.

German-Iraqi photographer Ihsan Jezany cannot understand the criticism. "The artist wanted to remind us of what happened in Abu Ghraib, and that's a good thing," he said. "I believe such images should be shown; if we hide them, we are only helping the perpetrators, not the victims." More so since the images have already been used by many artists and media around the world, Jezany pointed out.

Only way to stop abuse is to 'get rid of war'

The horrific images from Abu Ghraib used by Jean-Jacques Lebel at the Berlin Biennale are deeply anchored in collective memory. First published in 2004, they show, for instance, a man being tortured with electric shocks to his penis, and another forced to crawl naked on a dog leash. Abu Ghraib was a prison in Iraq where, under U.S. occupation of the country, American guards cruelly humiliated prisoners and recorded their pleasure in doing so on videos and photos on their mobile phones.

Even 10 years after the first images were published, Seymour Hersh, the U.S. investigative journalist who brought the incidents to light, said that what happened at Abu Ghraib could happen again at any time, even in the U.S. military. "The only way…to get rid of these kinds of abuses is to get rid of war – and that doesn't look like it's happening," he commented in 2014.

Unflattering terms were used at a German Football Association human rights congress aimed at "intensifying the discussion" ahead of the World Cup. One speaker in particular made ... END_OF_DOCUMENT_TOKEN_TO_BE_REPLACED

Fariduddin Attar’s "The Conference of the Birds", one of the seminal works of Islamic mysticism, has recently been published in sumptuously illustrated German translation. It ... END_OF_DOCUMENT_TOKEN_TO_BE_REPLACED

Egyptian authorities have Mada Masr in their sights once again after critical reporting. But the editor of the country's last independent news source is adamant they will continue ... END_OF_DOCUMENT_TOKEN_TO_BE_REPLACED

Like Christianity, Europe's history is one of migration. Both have strong roots in the Orient and in cultures thousands of years old. Cultural historian Bernhard Braun invites us ... END_OF_DOCUMENT_TOKEN_TO_BE_REPLACED

Mohamed Abla is the first visual artist from Egypt to be awarded the Goethe-Institut’s Goethe Medal, Germany’s highest honour in the area of foreign cultural policy. Stefan ... END_OF_DOCUMENT_TOKEN_TO_BE_REPLACED

END_OF_DOCUMENT_TOKEN_TO_BE_REPLACED
Social media
and networks
Subscribe to our
newsletter