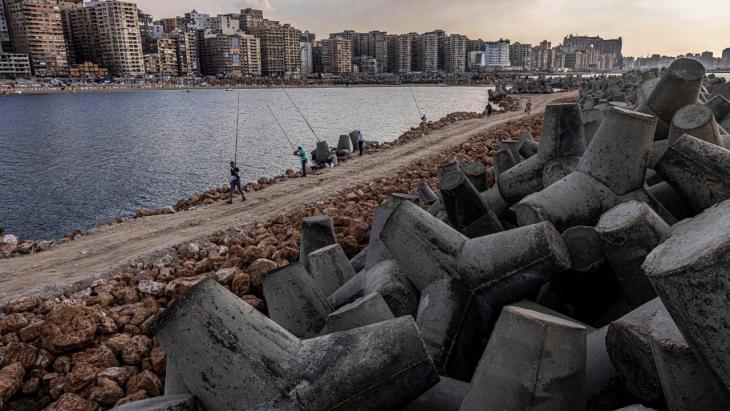 Alexandria, Egypt's fabled second city and its biggest port, is in danger of disappearing below the waves within decades.

With its land sinking, and the sea rising due to global warming, the metropolis Alexander the Great founded on the Nile Delta is teetering on the brink.

Even by the United Nations' best case scenario, a third of the city will be underwater or uninhabitable by 2050, with 1.5 million of its six million people forced to flee their homes.

Its ancient ruins and historic treasures are also in grave danger from the Mediterranean.

Already hundreds of Alexandrians have had to abandon apartments weakened by flooding in 2015 and again in 2020.

Every year the city sinks by more than three millimetres, undermined by dams on the Nile that hold back the river silt that once consolidated its soil and by gas extraction offshore.

Meanwhile, the sea is rising. The Mediterranean could rise a metre within the next three decades, according to the direst prediction of the UN's panel of climate experts, the IPCC.

That would inundate "a third of the highly productive agricultural land in the Nile Delta", as well as "cities of historical importance, such as Alexandria", it said.

Third of city could go 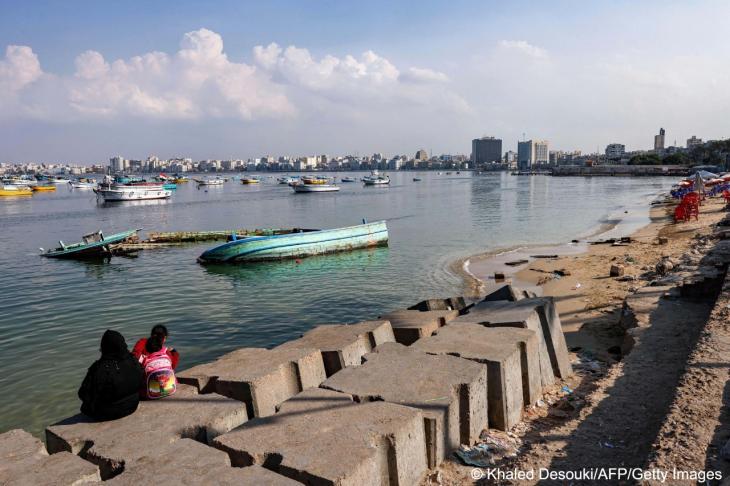 A different kind of disaster: if the sea level rises by half a metre, "30 percent of the city of Alexandria could be submerged, displacing nearly 1.5 million people or more", according to a recent United Nations report. It is also expected that 195,000 people will lose their jobs

"Climate change is a reality and no longer an empty threat," said Ahmed Abdel Qader, the head of the authority protecting Egypt's coastline.

Even under the best-case scenario outlined by other Egyptian and UN studies, the Mediterranean will rise 50 centimetres by 2050. That would leave 30 percent of Alexandria flooded, a quarter of the population having to be rehoused and 195,000 jobs lost.

Such a catastrophe will have dramatic repercussions for Egypt's 104 million people because "Alexandria is also home to the country's biggest port" and is one of the main hubs of the economy, Abdel Qader said.

Across the Delta, the sea has already advanced inland more than three kilometres since the 1960s, swallowing up Rosetta's iconic 19th-century lighthouse in the 1980s.

All this is happening as Alexandria's population is exploding, with nearly two million more people arriving in the last decade, while investment in infrastructure, as elsewhere in Egypt, has lagged. 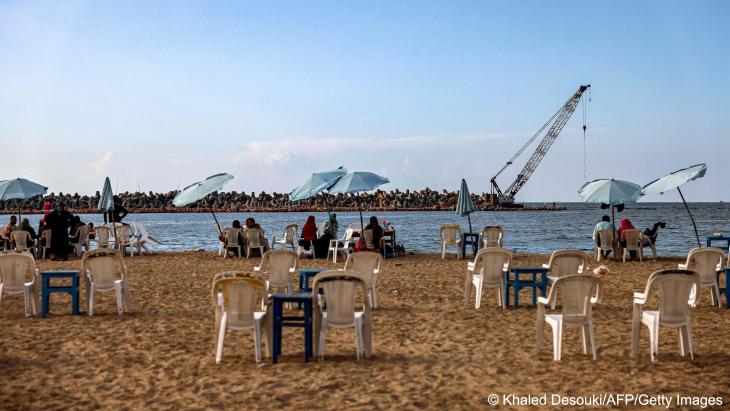 A third of Alexandria is at risk of inundation due to climate change: the Human Development Report for the year 2021 issued by the Egyptian Ministry of Planning in cooperation with the United Nations Development Program stressed that by 2050 the level of the Mediterranean sea may rise by one metre as a result of global warming, resulting in the inundation of some industrial cities, as well as cities of historical importance such as "Alexandria, Damietta, Rashid and Port Said"

The changing climate is also playing havoc with Alexandria's weather, which can veer from unseasonal heat to snow.

"We have never experienced such heat at the end of October," said resident Mohamed Omar, with the temperature rising to 26 degrees Celsius, five degrees above normal.

The looming threat has also been a hammer blow to the image of a city that likes to celebrate its cosmopolitan golden age at the start of the 20th century, with its art deco cafes and elegant avenues of Paris-style apartment buildings.

Many Egyptians were horrified when Britain's then-prime minister Boris Johnson warned that Alexandria was at risk of being lost "beneath the waves" at the COP26 climate change conference in Glasgow last year.

"Yes, the threat exists and we don't deny it, but we're launching projects to attenuate it," Abdel Qader said. A huge belt of reeds is being planted along 69 kilometres of coastline. "Sand sticks around them and together they form a natural barrier," he said.

Alert mechanisms and wave measuring systems are also soon to be put in place, Qader added.

Alexandria's rich and ancient heritage is particularly vulnerable. Most exposed is the 15th-century Mamluk citadel of Qaitbey, built on a neck of land that was once the site of the Lighthouse of Alexandria, one of the seven wonders of the ancient world.

Lashed relentlessly by the sea, a breakwater made up of 5,000 huge concrete blocks has been installed to protect it. More have been put in place to limit damage to the 19th-century corniche.

Destruction and rebuilding is nothing new to a city that once was home to the Library of Alexandria, the world's greatest temple of knowledge until it was accidentally burned by Julius Caesar's troops.

Neither its modern heir, a gleaming edifice on the corniche tilting like a solar disc toward the Mediterranean, nor the rest of the city can be left to a watery grave, Abdel Qader insisted.

"The West has a moral responsibility: it must help to counter the negative effects of climate change, which are the result of its civilisation" and industrialised model.    (AFP)

Home
Print
Newsletter
More on this topic
COP27 and the Middle East: Millions at risk of climate displacementIslamic environmentalism: The call to eco-jihadClimate change consequences for the Islamic world: Of infernal proportionsEnvironmental protection in Egypt: Did you enjoy your plastic meal today?
Related Topics
Abdul Fattah al-Sisi, Cairo, Climate change, Development aid, Eco-Islam, Ecology, History of the Near and Middle East, Multiculturalism, Places of Dialogue, Social movements
All Topics

In Doha, Arabs from Morocco, Tunisia, Egypt and Algeria are gathering to celebrate the first ever FIFA World Cup to be held on Arab soil. The criticism from Europe? Over the top, ... END_OF_DOCUMENT_TOKEN_TO_BE_REPLACED

November 2022 sees the Arab world firmly in the spotlight with the COP27 in Egypt and the FIFA World Cup in Qatar. Public trust in MENA governments is weak, thanks to their ... END_OF_DOCUMENT_TOKEN_TO_BE_REPLACED

Palme d’Or winner "Boy from Heaven" is a classic crossover film in which cultural elements are mixed together in haphazard and random fashion. Shady Lewis Botros bemoans the ... END_OF_DOCUMENT_TOKEN_TO_BE_REPLACED

COP27 in Sharm el-Sheikh is turning into a PR disaster for Egypt’s military regime. Instead of praise for the host, the news is full of solidarity for imprisoned activist Alaa ... END_OF_DOCUMENT_TOKEN_TO_BE_REPLACED

"Rebel Game: The Power of Football in the Middle East and the Qatar World Cup", an anthology published by Middle East researchers Jan Busse and Rene Wildangel, takes the upcoming ... END_OF_DOCUMENT_TOKEN_TO_BE_REPLACED
Date:
Mail:
Send via mail

END_OF_DOCUMENT_TOKEN_TO_BE_REPLACED
Social media
and networks
Subscribe to our
newsletter