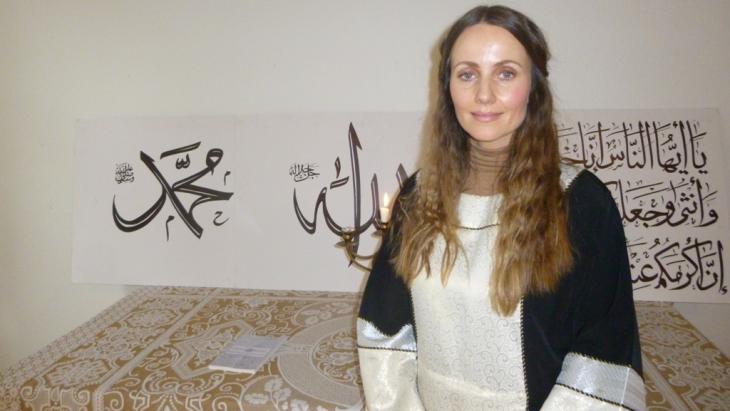 Friday prayers are regularly held in Europe′s first female-led mosque. In a further innovative step, a new Islamic academy for the training of female imams for Denmark is about to open its doors. Ulrike Hummel reports from Copenhagen

It has just turned twelve on a Friday afternoon in one of downtown Copenhagen's most popular shopping streets. On the first floor of one of the city's old established commercial buildings, women are completing the final preparations as the first visitors begin to arrive – all of them women. The hush in the stylishly furnished foyer is punctuated only by occasional small talk amongst the groups as they wait for things to begin. Then, the voice of a young woman is raised in the call to prayer – in Europe's first female-led mosque, Friday prayers are about to commence.

Around thirty women are gathered in the prayer room; some of them seem a little uncertain, while others are excitedly anticipating the arrival of the imam who will lead them in their Friday prayers. Actually two female imams are leading the service; one takes the prayers, the other recites the khutbah (sermon).

Worldwide, only a few female-led mosques exist outside of China. But there is a sense of pioneering optimism among these Muslim women today. "We want to challenge patriarchal structures within religious institutions and show the world that there is also a place for female imams in Islam," says Sherin Khankan. The 42-year-old imam is initiator and co-founder of the Mariam mosque. Female imams already existed during the lifetime of the Prophet Muhammad, Khankan says. In his house-mosque in Medina, Aisha and Umm Salama led prayers for the women.

Confronting the growth of Islamophobia

Imam and writer Khankan came up with the idea for a mosque led by women twelve years ago. "It was the growth of Islamophobia in Europe that made me think that the time was right to do something like this." It's a way of showing the world that women in Islam are not oppressed; moreover it could go some way towards correcting the negative image Islam now has. The Mariam mosque opened in the spring of 2016, though the Friday prayer sessions did not begin until August.

On this Friday it is very noticeable that there are many young women present, most in their early to mid-twenties. Some of them have a migrant background, though there are many converts too – and Christians also regularly come to prayer. The imams have introduced a number of innovations since the mosque opened. There are regular Sufi meditations in which men may also participate. In any case, except for the Friday prayers, which are held between 12 and 2 o′clock, the mosque is open to all comers, women and men alike. 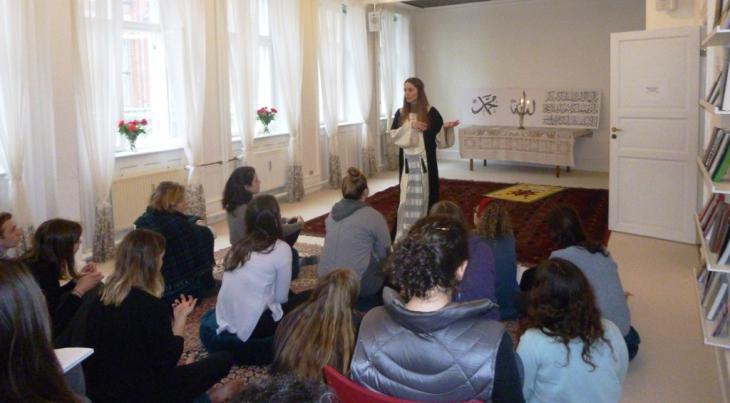 Positive feedback: on this Friday it is very noticeable that there are many young women present, most in their early to mid-twenties. Some of them have a migrant background, though there are many converts too – and Christians also regularly come to prayer. The imams have introduced a number of innovations since the mosque opened. There are regular Sufi meditations in which men may also participate

Only a few days previously, a group of politics students from the American University visited to attend a lecture. The women regard their main task, however, as being one of Islamic spiritual care. Indeed, the mosque is about to embark on a new project: "We will soon be opening an Islamic academy where we will be offering the opportunity to study Sufism, Islamic philosophy or the Arabic language," Khankan reveals.

Europe's first female-led mosque has provoked very differing reactions. While some Danes are barely aware of it at all, it has attracted a great deal of international attention. Opinions among the Muslim community in Denmark are very much divided on the question of whether or not female imams are acceptable.

"Their theological reference is wrong. Why should women have special needs? Are we also to create mosques only for men?" says Imam Waseem Hussein, chairman of the Danish Islamic Centre. So far, no other Danish imams have visited the women's mosque in Copenhagen, says Sherin Khankan. An imam, with accompanying delegation, from the world's third largest mosque in Indonesia, has visited however. "He led prayer, blessed our mosque and praised us for the work we do here."

The imams are particularly popular with women and young Muslims, such as Najeeb Ullah from Pakistan, who is studying in Copenhagen: "This is something positive for all non-Muslims and shows that men and women are equal in Islam – at least if one understands Islam properly." Although women don't have the same rights as men in Pakistan, Afghanistan or Saudi Arabia, that, she says, has nothing to do with Islam as a religion. 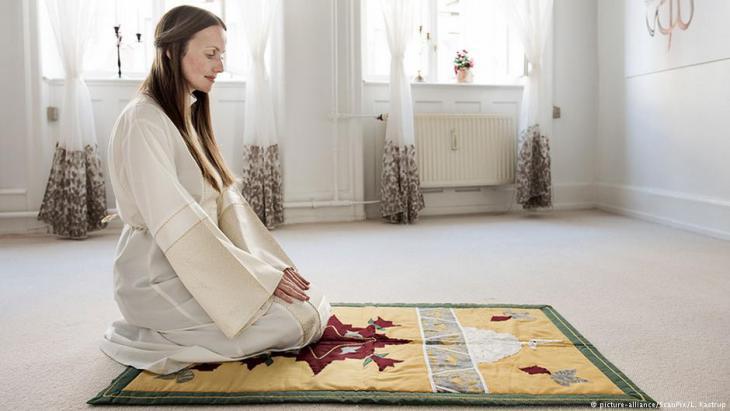 Hoping to foster acceptance among both women and men: "we want to challenge the patriarchal structures that still exist within our religious institutions today," says Danish imam Sherin Khankan. The daughter of Syrian and Finnish parents is imam and head of the Mariam Mosque in Copenhagen. The Mariam Mosque is the first in Europe to be founded and led by women

Most criticism of the female-led mosque comes from conservative Muslim circles. Twenty-nine-year-old Haydar Mahdi, who runs an oriental take-away in Copenhagen, is of the opinion that menstruation makes "women unsuitable as imams, because they are prohibited at such times from entering a mosque. So how are they going to be able to lead Friday prayers regularly?"

Abdel Hussein Kaabi, an exiled Iraqi, who has lived in Denmark for many years, sees no theological basis for female imams: "Imams have to be male. A woman as imam is incompatible with the Koran."

Confronting growing Islamophobia and challenging patriarchal structures were not the only motivations prompting the female imams to establish their own mosque. They also saw a need for female imams within the Muslim community in Denmark. Up until recently, any married Muslim woman who wanted a divorce to escape abuse and violence within her marriage, could find no male imams, anywhere in Denmark, willing to perform an Islamic divorce. This option has now become available, says Khankan.

The new Islamic academy plans to offer female Islamic Studies graduates the opportunity to take a master′s degree to qualify as an imam. "Seventeen different courses will be on offer. There will be presentations on family law and special courses on Islamic spiritual care," Khankan explains. After completion of the studies programme, the newly qualified students must be able to recite the Koran, lead Friday prayers and conduct Islamic wedding ceremonies and divorces. "We will use the academy to train female imams for Denmark," says the 42-year-old.

That Sherin Khankan and her fellow imams were able to set up their mosque at all was down to chance – and the help of a man. An anonymous benefactor, who read about the group's vision for a female-led mosque in the newspaper, was so fascinated by the idea, that he immediately made premises available to the writer, Sherin Khankan. And not just any old premises; no shabby rooms on a run-down industrial estate on the outskirts of the city, but instead an entire floor in prestigious commercial premises in one of the most expensive neighbourhoods in Copenhagen. The vision became a reality.

The mosque community, which takes its spiritual orientation from Sufism, sees Islamic spiritual care as its primary duty. But the maintaining of interreligious dialogue is also a special priority. "We work mainly with a Jewish group in Denmark where women also lead the Jewish prayer services," says Sherin Khankan.

A special feature of the Mariam mosque is the joint prayer service that brings together Muslims, Christians and the followers of other religions. "At our first Friday prayers last August we had 70 visitors – 40 Muslim and 30 non-Muslim women. We joined together in prayer and there were some very moving moments," Khankan enthuses.

When it began, the mosque had two female imams. Now it has a total of five and two preachers, all of them volunteers. In addition to Friday prayers, the Mariam mosque also offers Sufi meditation, marriage, divorce, Islamic funerals and readings. And, of course, very soon, the Islamic academy will be added to the list.

"Flugt" is the world's first museum dedicated to the stories of those forced to flee. The new museum, which focuses on the fates of refugees then and now, is housed in a former ... END_OF_DOCUMENT_TOKEN_TO_BE_REPLACED

Hamburg lawyer Eugen Balin is a member of the World Jewish Congress' Jewish Diplomatic Corps. At the end of 2021, a delegation of the Corps visited the United Arab Emirates, which ... END_OF_DOCUMENT_TOKEN_TO_BE_REPLACED

India is not alone in feeling great sadness today over the death of renowned Reuters photojournalist Danish Siddiqui. He was killed in Afghanistan during clashes between Afghan ... END_OF_DOCUMENT_TOKEN_TO_BE_REPLACED

By stage-managing his re-election in a poll widely dismissed as a farce, Syria's President Bashar al-Assad has killed two birds with one stone: he has forced his compatriots to ... END_OF_DOCUMENT_TOKEN_TO_BE_REPLACED

Born amid the horrors of war in Iraqi Kurdistan, Danish author Sara Omar now uses her voice to denounce violence inflicted on women in the name of reactionary Islam, a "calling" ... END_OF_DOCUMENT_TOKEN_TO_BE_REPLACED

Comments for this article: When the muezzina calls

Are these female imams following the Sunna?
Can they really read the Wuran and Sahih Al bokhare? If this is the case, they would know that it is forbidden for a women to be a muazzin or to be an imam.

END_OF_DOCUMENT_TOKEN_TO_BE_REPLACED
Social media
and networks
Subscribe to our
newsletter