For weeks, there's been nothing but news about all things coronavirus. Cartoonists need no more than a few lines to trigger emotions like fear and sadness, but also hope for the day when this crisis is finally over. By Suzanne Cords 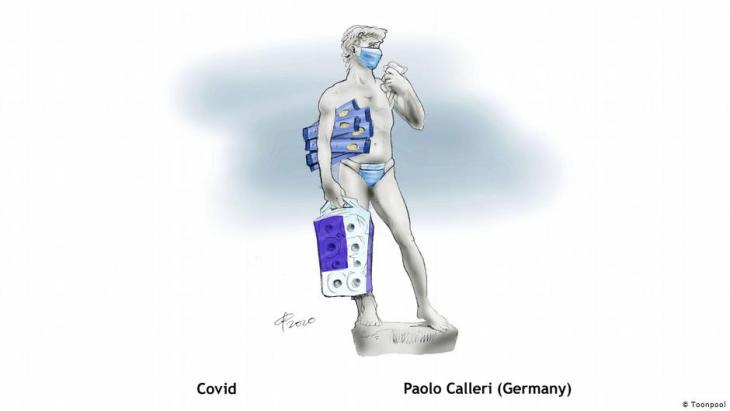 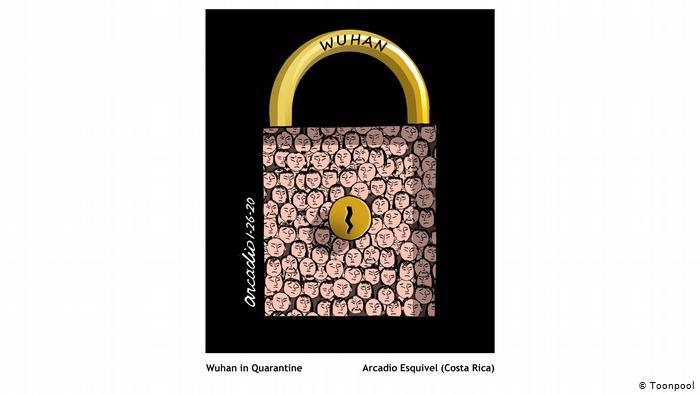 Wuhan, quarantined: at first everyone thought the coronavirus was a Chinese problem. Wuhan? Never heard of it. Wuhan was far away. The authorities in Beijing initially didn't tell anyone about the dangerous virus that was spreading. Then they placed Wuhan citizens, and people throughout Hubei province, under house arrest. The world watched and thought it was safe 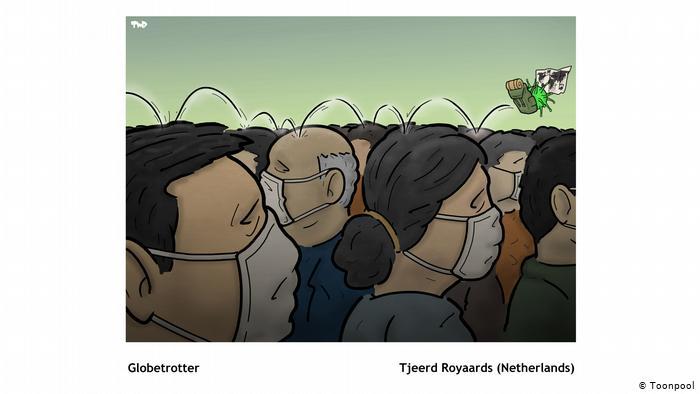 Globetrotter: but the virus did not care about borders – and hit the road. Dutch cartoonist Tjeerd Royaards adds a whole new dimension to the term "globetrotter". Suddenly, more and more people in other countries fell ill and died 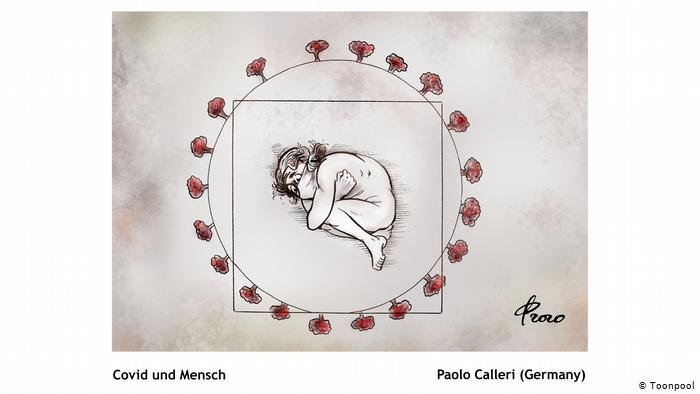 COVID-19 versus mankind: surrounded by the novel coronavirus, people all over the world feel defenceless against it. There is no vaccine and nobody knows what is going to happen, not even virologists and doctors. Paolo Calleri sums up this feeling of helplessness that has a firm grip on people 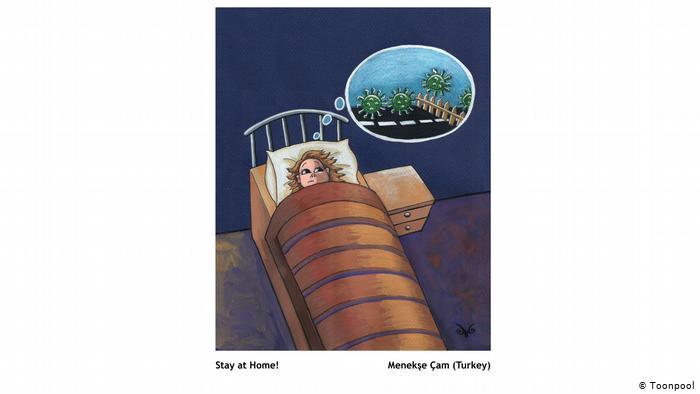 Nightmares: "stay at home" is the order of the day around the globe to avoid a COVID-19 infection. But even at home, the treacherous virus is never far from people's minds. Here Turkish cartoonist Menekse Cam portrays a girl who is trying to fall asleep, and ends up counting viruses instead of the traditional sheep 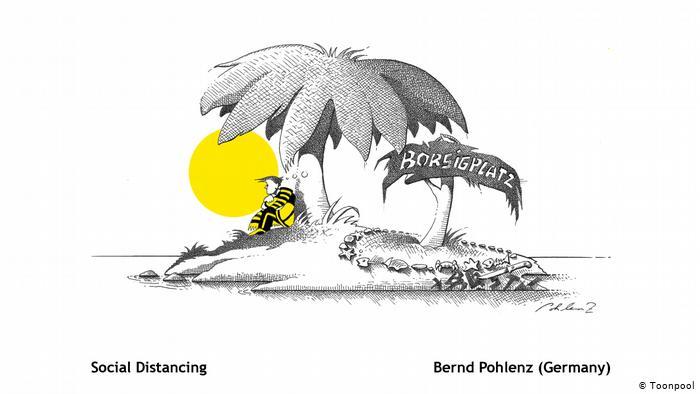 I need my team: social distancing gives many people the feeling they are stuck on a deserted island. In the cartoon, a Borussia Dortmund football fan doesn't want to give up his beloved Borsigplatz square, the legendary place where his club was once founded and which has seen many a championship celebration 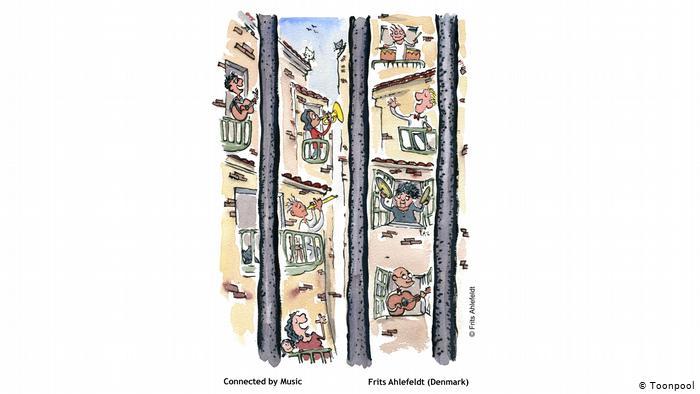 Connected by music: the Italians, who were initially the hardest-hit nation in Europe, sang and played music during the lockdown, evening after evening, from their balconies. Some simply took a moment out of their day to applaud the heroes of the crisis, the doctors and nurses. The balcony concerts created a sense of community across all social distancing requirements: Tutto andrà bene – everything will be ok 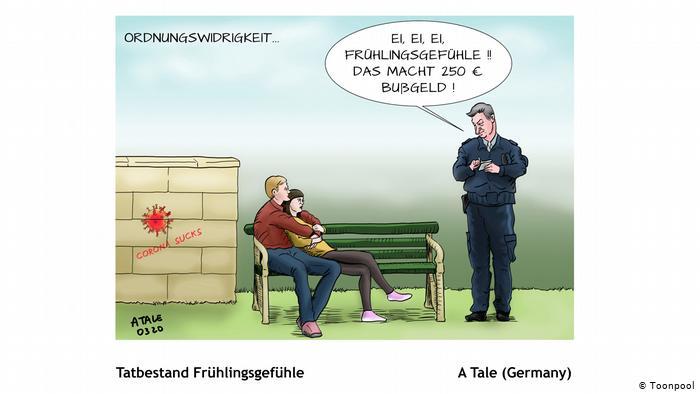 Keep your distance: the curfews were more drastic in Southern Europe than elsewhere. People in Germany, for instance, were allowed to leave the house, but had to comply with keeping a distance of at least 1.5 metres to others or risk paying heavy fines. The public order staff have been relentless 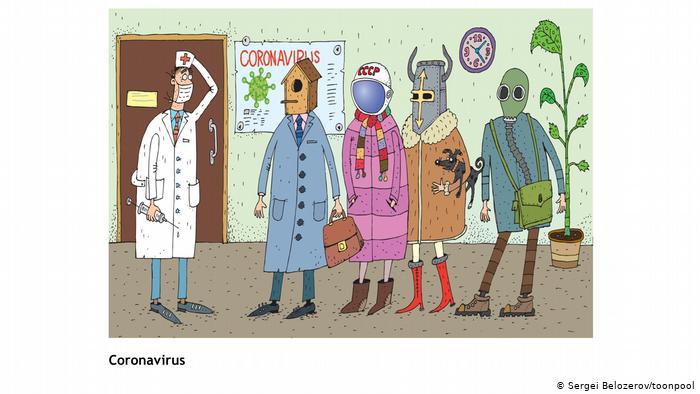 Face masks wherever you look: wearing face masks minimises the risk of infection, so it is mandatory in many countries. But what do you do when the shelves in the supermarket are empty and the masks are sold out? Improvisation is called for, as far as the Russian cartoonist Sergei Belozerov is concerned. Follow his lead, and you can enter the doctor's waiting room without having to worry 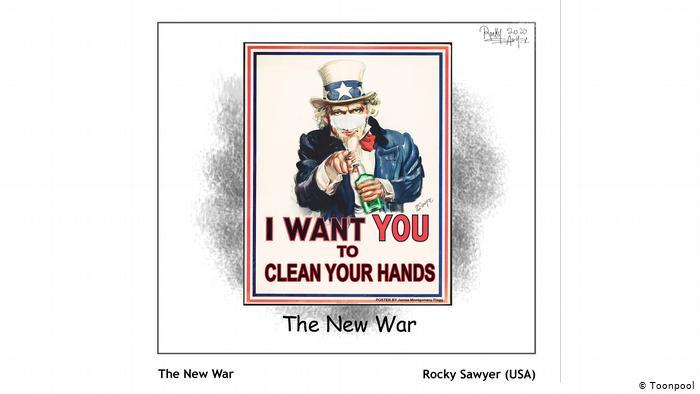 Hand hygiene: wash your hands, wash your hands and wash your hands again: it's what politicians and doctors have been repeatedly recommending to help us survive the war against the coronavirus – and so does Uncle Sam. Don't listen to U.S. President Donald Trump, however, who thought injesting disinfectant would be a good idea 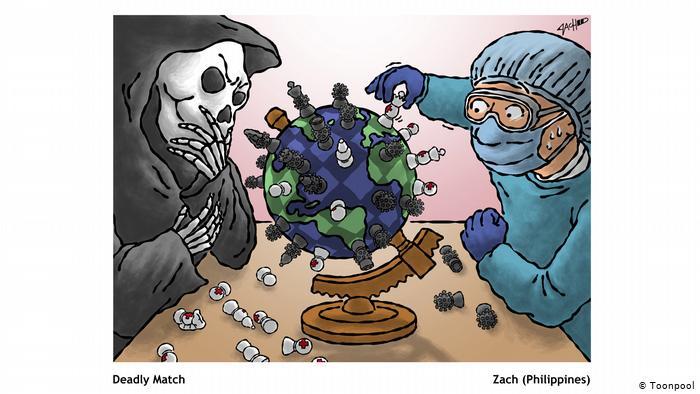 Deadly match: it's a race against time. Research labs are looking for a vaccine against the coronavirus. Until they find one, the deadly game between mankind and the disease, as seen by Zach, a cartoonist from the Philippines, will continue. The outcome is uncertain 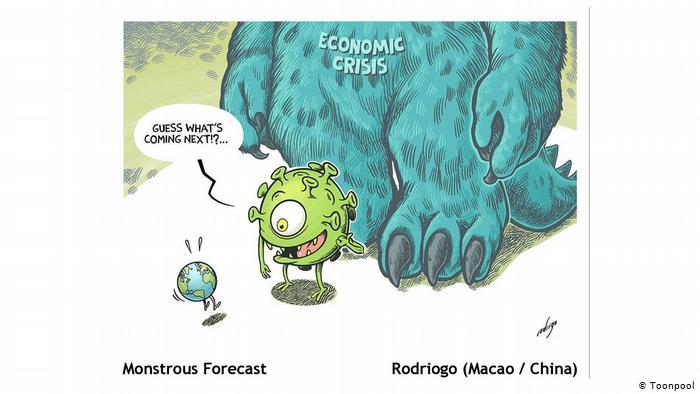 Monstrous forecast: in order to protect their citizens, governments around the world mandated lockdowns, which had devastating consequences for the economy. Many companies are on the brink of bankruptcy. Despite aid programmes, millions of people no longer know how to pay rent and food. For Rodriogo from China, the economic crisis is an even bigger monster than the virus: "Guess what's coming next?" 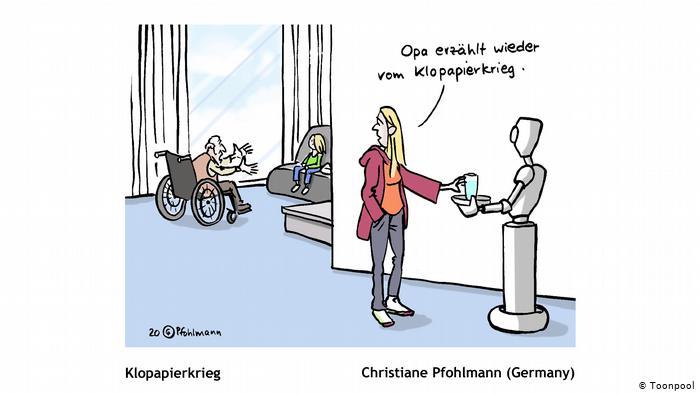 Back then, in the war: one day, this pandemic will be history, just like the Spanish flu. Grandfathers will tell their grandchildren what it was like when people stockpiled dried and canned goods, about this awful time when stores ran out of toilet paper and you were left fighting for the last few rolls...

END_OF_DOCUMENT_TOKEN_TO_BE_REPLACED
Social media
and networks
Subscribe to our
newsletter