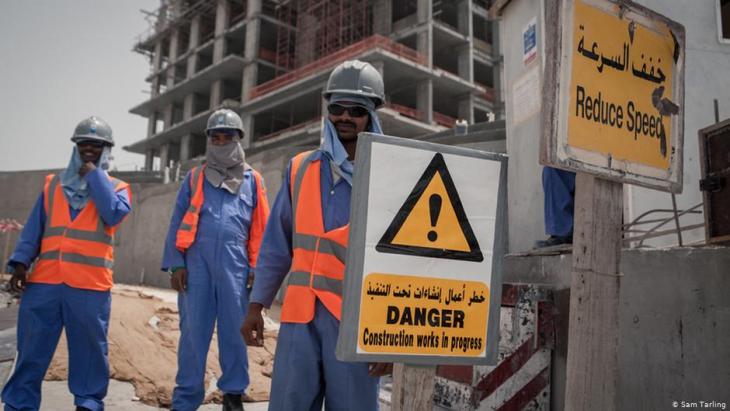 Between draconian migration laws and the continuing lockdowns, migrant workers in the Gulf were already facing increasing uncertainty. Now, keen to offload any duty of care, host countries are scrambling to repatriate as many as possible. Rabiya Jaffery reports

Hassan is a migrant worker from Bangladesh currently working and living in Riyadh, Saudi Arabia. He shares a one-bedroom flat with 11 people, all under quarantine after one of his flatmates was tested positive for COVID-19 after a visit to the hospital following a cough and a high fever.

Hassan states that the police visited that evening and placed the building under quarantine. Two days later, a doctor came to test the entire building and, another three days later, Hassan discovered that he and four other flatmates had also tested positive.

"I don’t have any symptoms as such - sometimes I feel like I have a sore-throat at night but then I think my brain is tricking me," he says in an interview on the phone, one week after he tested positive. "What I am more worried about is money."

While he is in quarantine, food is being provided by the government, but he is uncertain about the circumstances once he recovers and can go back to his flat as his company has neither made clear when work will resume nor if he will be getting paid for his days in quarantine.

Hassan isn’t alone - human rights organisations are concerned that the millions of migrant workers in the Gulf will continue to be disproportionately affected by economic uncertainty as host countries implement containment measures to limit coronavirus cases in the region. 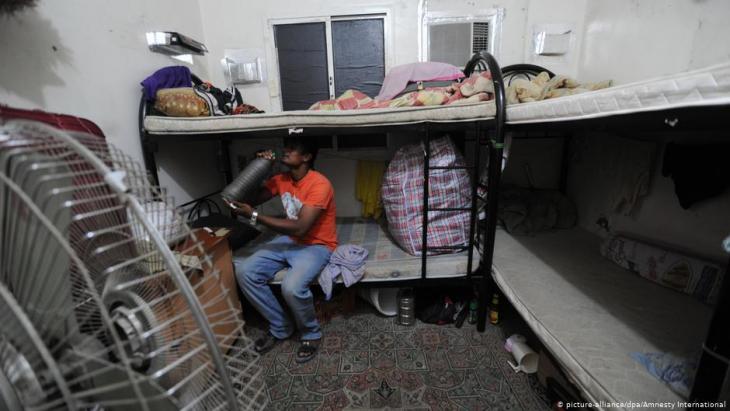 Quarantine, isolation and growing insecurity: the coronavirus pandemic is hitting migrant workers, most of them from South Asia, hardest in all the Gulf States. There is usually no way home for the millions of men and women – many countries of origin refuse to take back their citizens who are ill with COVID-19

The total number of cases in the Gulf states has exceeded 20,000 with over 150 deaths and countries are continuing their ban on most passenger flights and are extending internal lockdowns and curfews to contain the number of growing cases.

"This pandemic has both exposed decades of systematic racial discrimination and deepened the suffering of migrant workers who have long faced exploitation and abuse under the Gulf states’ various kafala systems," says Hiba Zayadi, Human Rights Watch's Gulf researcher.

The number of cases have been exponentially increasing in the Gulf states and although little information has been released by official authorities about how it is particularly affecting migrant workers, many facilities housing migrants all over the region, such as Qatar’s largest labour camp, have been under lockdowns and many companies, whose staff primarily consists of migrant labor, have also quarantined their workers after positive cases started emerging.

Desperate for quarantine to be over

Bilal works for a private supermarket chain in Mecca, Saudi Arabia, and is currently one of the nearly 50 workers from his company that are quarantined after a co-worker tested positive for coronavirus. The workers have all been provided individual rooms in a hotel - one of the many in the city that is typically visited by thousands of religious pilgrims - and are being provided three meals a day until the quarantine period is over.

In Doha, Arabs from Morocco, Tunisia, Egypt and Algeria are gathering to celebrate the first ever FIFA World Cup to be held on Arab soil. The criticism from Europe? Over the top, ... END_OF_DOCUMENT_TOKEN_TO_BE_REPLACED

After a two-year hiatus, the Arab League re-convened at the beginning of November in Algiers against a backdrop of uncertainty and discord. By Pierre Boussel END_OF_DOCUMENT_TOKEN_TO_BE_REPLACED

Anger in the Middle East is spreading over comments made by an official of India's ruling BJP about the Prophet Muhammad, with various countries summoning New Delhi's envoy and a ... END_OF_DOCUMENT_TOKEN_TO_BE_REPLACED

Women's empowerment in the Gulf has become a tool of deflection, rather than a genuine effort to promote women’s full and equal participation in society. By Mira Al-Hussain END_OF_DOCUMENT_TOKEN_TO_BE_REPLACED

A straightforward message emerged from last week’s meeting in the Negev desert of the foreign ministers of four Arab countries, Israel and the United States: Israel is key to the ... END_OF_DOCUMENT_TOKEN_TO_BE_REPLACED

Hamburg lawyer Eugen Balin is a member of the World Jewish Congress' Jewish Diplomatic Corps. At the end of 2021, a delegation of the Corps visited the United Arab Emirates, which ... END_OF_DOCUMENT_TOKEN_TO_BE_REPLACED
Author:
Rabiya Jaffery
Date:
Mail:
Send via mail

END_OF_DOCUMENT_TOKEN_TO_BE_REPLACED
Social media
and networks
Subscribe to our
newsletter