"We are being treated well and a doctor is going to come in to take our tests soon so we can know our results before the two weeks are over," he says. "But it really depends on the company you work for and how lucky you are - I know some people who are locked up in their regular rooms that they share with 3-4 other men. Everyone is having a very different experience because companies lie to the government."

Several Gulf countries have announced that they will be introducing policies to alleviate the increased financial hardships migrant workers are going to face as a result of the pandemic. For instance, UAE has announced that all companies must provide housing to laid off workers until they can leave or find another job and Qatar has stated that it will cover the wages of all quarantined migrant workers.

"But time and again, groups like ours have exposed problems with implementation and enforcement of announced reforms that often stem from the kafala system that governs migrant workers itself," says Zayadi. "I don’t see how or why, now, during this unprecedented crisis, we can trust these governments to properly implement and enforce announced measures to protect migrant workers against financial ruin."

Uncertainty over financial security remains a common concern for migrant workers throughout the region. 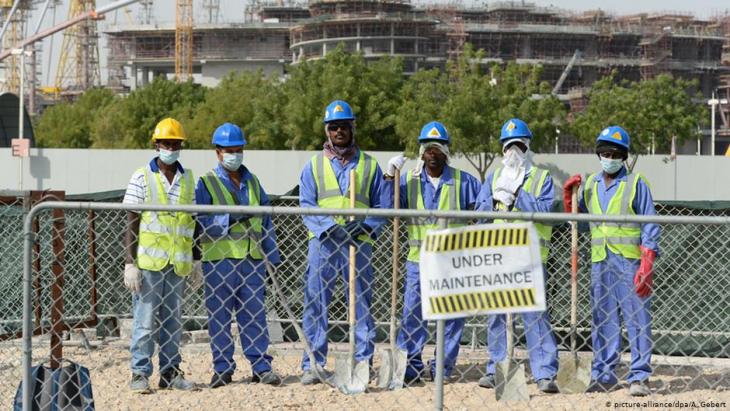 Main victims of the corona pandemic: migrant workers from India, Pakistan, Nepal and Sri Lanka make up a large proportion of those infected with the coronavirus in the Gulf States. In Saudi Arabia alone, according to official figures, 70 to 80 percent of the recently detected cases of infection involved foreigners. In the United Arab Emirates, Kuwait and Qatar, too, the coronavirus has spread at high speed – especially in the often miserably equipped accommodation for migrant workers

"My brother is a taxi driver here and I work in construction and we are both not sure how to continue supporting our families back home," says Faraz Khan, a Pakistani worker based in Dubai, UAE. "The company I work for has asked us to stay home but we are probably not getting paid, nobody is sure. My brother is still driving his taxi but there are hardly any passengers to pick up so it is almost like having no work."

Faraz also works as domestic help for two households that he visits on the weekends for 3-4 hours each. He is one of the many migrant workers in the region who have taken up irregular jobs as part-time work, usually working for medium-income expats who don’t have the budget to sponsor and hire full-time domestic help.

The rollout of coronavirus vaccines in the Middle East and North Africa is already taking place on a massive scale, with the United Arab Emirates leading the way. Nevertheless, ... END_OF_DOCUMENT_TOKEN_TO_BE_REPLACED

German Middle East analyst Guido Steinberg and television journalist Ulrich Tilgner have both published new books on the conflicts in the Middle East. Their analyses and their ... END_OF_DOCUMENT_TOKEN_TO_BE_REPLACED

Saudi Arabia and its allies have agreed to set aside their differences with Qatar at a summit meeting of the Gulf Cooperation Council. The restoration of diplomatic relations ... END_OF_DOCUMENT_TOKEN_TO_BE_REPLACED

Ten years after the start of the Arabellion in North Africa and the Middle East, many view the movement as a failure. But rather than being over, it has now entered a more mature ... END_OF_DOCUMENT_TOKEN_TO_BE_REPLACED

A heated debate is raging in the Islamic world about whether the religious and political spheres in Islam are one and the same. Before this matter can be settled, the terms " ... END_OF_DOCUMENT_TOKEN_TO_BE_REPLACED
Author:
Rabiya Jaffery
Date:
Mail:
Send via mail

END_OF_DOCUMENT_TOKEN_TO_BE_REPLACED
Social media
and networks
Subscribe to our
newsletter