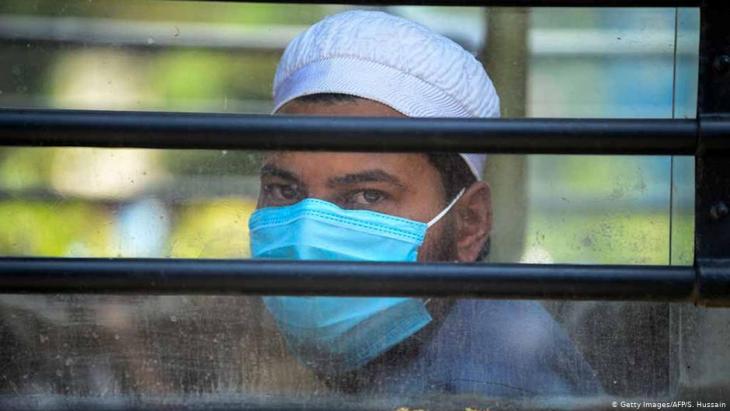 Coronavirus pandemic in the Islamic world
Doubling down on containment efforts

Around the Islamic world, lockdowns and curfews are being extended and religious ceremonies are being cancelled outright in the hope of slowing the spread of COVID-19. Here’s the latest from across the region

On Sunday, Algeria extended the curfews it put in place to limit the spread of the coronavirus. The curfew will last from 3 p.m. until 7 a.m. in the capital Algiers and eight other provinces, and from 7 p.m. until 7 a.m. in most of the others. The two southernmost provinces, which are almost entirely desert, have no confirmed cases and will not be under curfew.

Bangladesh has announced an economic stimulus package worth over 8.5 billion dollars to cushion the shock of the global coronavirus pandemic. Prime Minister Sheikh Hasina rolled out the plan in a nationwide televised speech and said special measures are needed to support industries because most of them are likely to face a slump during the lockdown.

Bangladesh vowed on Monday to provide emergency food supplies for "as long as needed" to thousands of sex workers left destitute by the sudden closure of brothels due to the coronavirus pandemic. On 20 March, the government announced it was shutting about 12 officially sanctioned brothels in Bangladesh until at least 5 April, including one of the world's largest brothels, Daulatdia, which houses about 1,500 female sex workers.

On Monday, restrictions on devotees attending obligatory daily prayers at more than 250,000 mosques nationwide were introduced as the number of novel coronavirus cases surged. "No more than five persons at a time will be allowed to attend the congregations for the daily prayers," the Religious Affairs Ministry said. Only the imam, muezzin – who summons to prayer five times a day – and other mosque officials will be allowed to say their prayers inside the mosque, it added. A maximum of 10 people can attend Friday prayers, the order said, asking people to say their prayers at home instead.

Egypt will ban any public religious gatherings during the Muslim holy month of Ramadan, which starts in around two weeks, to counter the spread of the new coronavirus. Egypt is also banning any gatherings and public iftars (fast-breaking meals) as well as collective social activities, the Ministry of Islamic Endowments said in a separate statement. The ban will also apply to the seclusion of Itikaf, when Muslims spend the last 10 days of the month in mosques to pray and meditate, the ministry said.

Egypt's Coptic Orthodox church has decided to suspend prayers preceding Easter celebrations later this month as part of efforts to stem the spread of the novel coronavirus.

Chinese President Xi Jinping's visit to Saudi Arabia in December 2022 may have rattled Washington, but it simply highlighted the Arabs’ desire to diversify their foreign relations ... END_OF_DOCUMENT_TOKEN_TO_BE_REPLACED

Nouara may be 65, but she is ready to join thousands of others who burn their ID and pay traffickers for the chance of a new life in Europe. Zineb Bettayeb reports END_OF_DOCUMENT_TOKEN_TO_BE_REPLACED

In Doha, Arabs from Morocco, Tunisia, Egypt and Algeria are gathering to celebrate the first ever FIFA World Cup to be held on Arab soil. The criticism from Europe? Over the top, ... END_OF_DOCUMENT_TOKEN_TO_BE_REPLACED

"Rebel Game: The Power of Football in the Middle East and the Qatar World Cup", an anthology published by Middle East researchers Jan Busse and Rene Wildangel, takes the upcoming ... END_OF_DOCUMENT_TOKEN_TO_BE_REPLACED

After a two-year hiatus, the Arab League re-convened at the beginning of November in Algiers against a backdrop of uncertainty and discord. By Pierre Boussel END_OF_DOCUMENT_TOKEN_TO_BE_REPLACED
Date:
Mail:
Send via mail

END_OF_DOCUMENT_TOKEN_TO_BE_REPLACED
Social media
and networks
Subscribe to our
newsletter