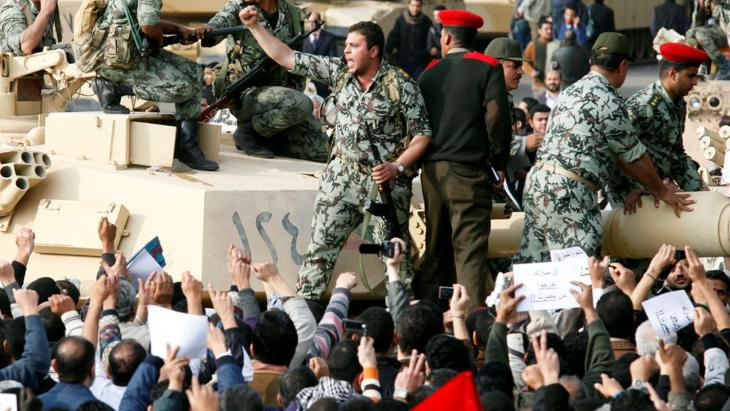 Corruption in the Arab world
Why are most Arabs so prepared to trust the military?

Why do so many people in Arab countries trust the armed forces, even though most armies in the region are highly corrupt? Abdalhadi Alijla has the answers

Do people in the Arab region tend to trust transparent and corruption-free institutions more than others? That is what you would expect, but the opposite appears to be the case.

In Egypt, for instance, 57% of Egyptians polled in 2018 said that they put great trust in the army, while 27.3% put considerable trust in their armed forces. Strikingly, 48% of respondents who said that they had a high level of trust in the army believed that corruption in the country was extreme. The majority of those surveyed tended to believe that there is corruption to a large extent at a national level (formal institutions): 74% of Iraqis, 59% of Lebanese, 77% of Libyans, 42% of Moroccans, 46% of Sudanese, 74% of Tunisians and 33% of Yemenis.

You may also like: Corruption in the Arab World – Bought loyalties 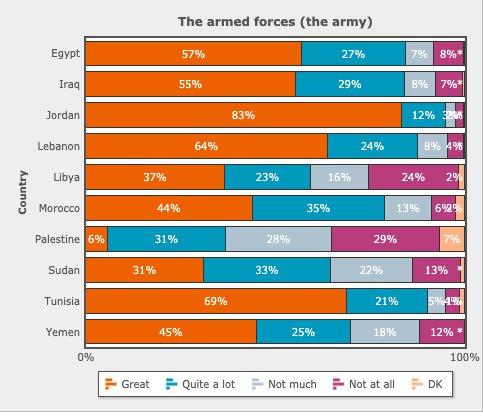 Compared to the data from the Arab Barometer, we find that the countries at critical risk of corruption put high levels of trust in the army. For instance, in Tunisia, which is the only MENA country which scored a “D”, 69% trust the armed forces, although 74% of them believe that corruption is rife in the country. Tunisia’s risk of corruption level would appear to indicate a slight improvement within the defence sector.

A need for security? Heroism? Militarism?

This contradictory attitude to corrupt institutions that have not only been abusing their power and exploiting the economy, but also evade scrutiny and oversight under the pretext of confidentiality and national security raises the question as to why people tend to trust what they perceive to be corrupt. Do they prioritise security? Heroism? Militarism?

Are citizens of these countries aware of the corruption within the defence sector, or do they prefer to turn a blind eye, since the army remains the most powerful institution in the country? In fact, many people do know about the corruption in the military, but do not speak out because they fear extreme punishment. By extension, corruption cases are not covered by the media, meaning the general public remains ignorant of their existence.

Alaa Abd el-Fattah, arguably Egypt’s most prominent democracy activist, has just been handed another lengthy prison sentence. Despite this, a book of his writing has recently been ... END_OF_DOCUMENT_TOKEN_TO_BE_REPLACED

People in Arab countries have been talking more openly about sex and sexuality for some time now, especially on social media. And for the first time ever, they have the vocabulary ... END_OF_DOCUMENT_TOKEN_TO_BE_REPLACED

A prominent rights group in Egypt, the Arabic Network for Human Rights, is ending operations just as the country braces for a controversial NGO law. Is this the beginning of the ... END_OF_DOCUMENT_TOKEN_TO_BE_REPLACED

Moncef Marzouki was Tunisia's first democratically elected president after the fall of dictator Ben Ali. Today he is the most prominent critic of increasingly counter- ... END_OF_DOCUMENT_TOKEN_TO_BE_REPLACED

Asef Bayat, professor of Sociology at the University of Illinois, Urbana-Champaign, has been studying revolutions and how they affect people since 1979. In his recent book, " ... END_OF_DOCUMENT_TOKEN_TO_BE_REPLACED

Every year in December, the team at Qantara.de takes a look back at the articles that proved most popular with our readers. This year is no different. Here is a run-down of the ... END_OF_DOCUMENT_TOKEN_TO_BE_REPLACED
Author:
Abdalhadi Alijla
Date:
Mail:
Send via mail

END_OF_DOCUMENT_TOKEN_TO_BE_REPLACED
Social media
and networks
Subscribe to our
newsletter