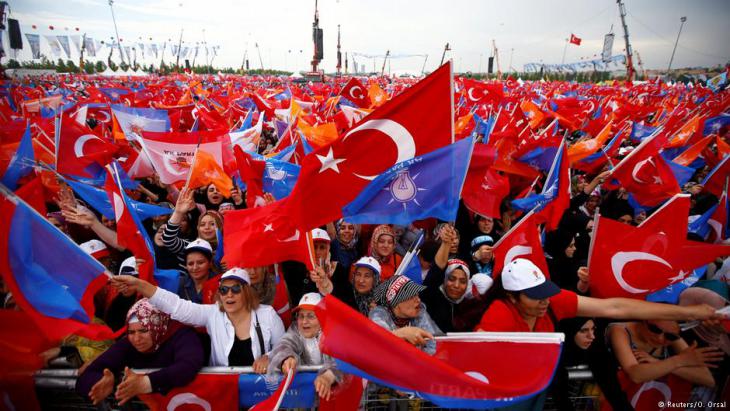 Countdown to the Turkish election
Erdogan beats the nationalist drum

Elected Mayor of Istanbul in 1994, Recep Tayyip Erdogan pledged not blame Turkeyʹs problems on "outside powers, outside forces, or foreigners". Years later, with the weight of the presidency and a struggling currency upon him, that pledge is long gone. By Tom Stevenson

On 5 June, at a campaign rally in Sakarya, to the east of Istanbul, Erdogan ascribed the rapid deterioration of the Turkish Lira to an attack on the Turkish economy by "outside forces", a phrase he now uses regularly. The lira has depreciated almost 20 percent since the beginning of the year, falling to record lows. The Turkish president promised supporters he would "settle the score" with these unspecified foreign powers after elections slated for 24 June.

The snap parliamentary and presidential elections were called in April by Erdogan himself, but he has already faced a tougher campaign than he appears to have expected. In April, Turkeyʹs opposition parties looked to be in disarray. However the opposition has over performed expectations. Opposition parties have formed an alliance of convenience aimed at forcing a second-round run off in the presidential poll between Erdogan and the Republican Peopleʹs Party (CHP) candidate Muharrem Ince, who has energetically presented himself as an everyman candidate.

The ruling Justice and Development Party (AKP) campaign has sometimes looked lacklustre. In an attempt to present the partyʹs record as cool economic managers ahead of the election, Erdogan stressed the rise in refrigerator ownership since the party came to power in the early 2000s. But the liraʹs depreciation has drawn concern and complaints from across the society threatening the AKPʹs electoral prospects, which until recently appeared bulletproof. Inflation is rising too; the latest data show prices rising 12 percent over the past year. 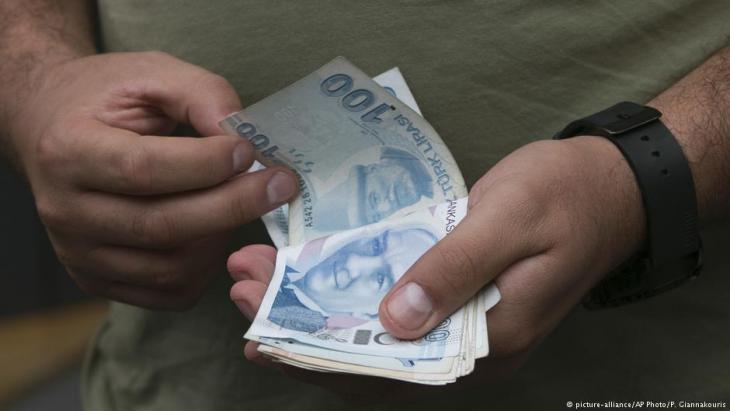 Conspiracy theory rhetoric: on 7 June, the central bank hiked interest rates by 125 basis points in an attempt to stop the liraʹs slide. But Erdoganʹs eccentric theories about 'evil foreign powers' and his dominance in policy-making have resulted in the authorities being slow to act in the face of clear indicators that rate rises were needed. "Aside from his hostile attitude towards not-so-clear enemies, Erdoganʹs bizarre ideas on economics have been problematic," says Oguz Erkol, a Turkish markets analyst

The economy tops the list of Turkish voter concerns and according to Oguz Erkol, a Turkish markets analyst, nationalist rhetoric about the liraʹs fall will only increase as the elections approach. "Erdoganʹs rhetoric that claims ʹforeign evil powersʹ are behind the recent sell-off in Turkish markets is essentially employed for influencing the electorate," Erkol said.

The Turkish president has expressed highly unusual views on the relationship between interest rates and inflation which do little to inspire confidence in Turkeyʹs creditors, particularly as he has shown a willingness to override the nominal independence of the Turkish central bank.

On 7 June, the central bank hiked interest rates by 125 basis points in an attempt to stop the liraʹs slide. But Erdoganʹs eccentric theories and his dominance in policy-making have resulted in the authorities being slow to act in the face of clear indicators that rate rises were needed. "Aside from his hostile attitude towards not-so-clear enemies, Erdoganʹs bizarre ideas on economics have been problematic," Erkol said.

Relations between Turkey and Russia are ambivalent. Moscow is nonetheless trying to prop up the leadership in Ankara. Elections are to be held in Turkey in June – and the last ... END_OF_DOCUMENT_TOKEN_TO_BE_REPLACED

All eyes in Turkey are on a court hearing scheduled for January 30 into a child abuse case that allegedly occurred with the knowledge of one of Istanbul's most powerful Islamic ... END_OF_DOCUMENT_TOKEN_TO_BE_REPLACED

Any reconciliation between Turkey and Syria’s Assad regime would have disastrous consequences for many Syrians, explains Syria expert Kristin Helberg END_OF_DOCUMENT_TOKEN_TO_BE_REPLACED

The poetry of Pir Sultan once prompted uprisings in the Ottoman Empire. To this day, Alevis identify with him. Rainer Hermann visited Mehmet Celebi, a direct descendant of the ... END_OF_DOCUMENT_TOKEN_TO_BE_REPLACED

There are signs of an imminent normalisation of relations between Turkey and Syria. This would allow Erdogan to score political points domestically before the upcoming elections ... END_OF_DOCUMENT_TOKEN_TO_BE_REPLACED

Turkey will mark the centenary of the proclamation of the Turkish republic in October. But 2023 will be an important year in another respect too: Turks will go to the polls in ... END_OF_DOCUMENT_TOKEN_TO_BE_REPLACED
Author:
Tom Stevenson
Date:
Mail:
Send via mail

END_OF_DOCUMENT_TOKEN_TO_BE_REPLACED
Social media
and networks
Subscribe to our
newsletter