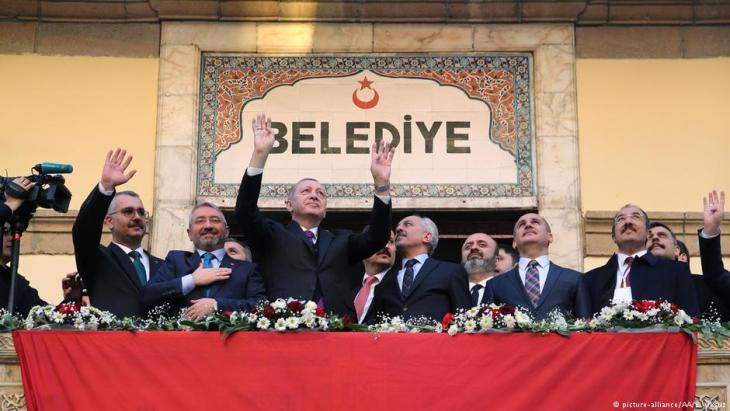 The AKP is currying favour with the electorate using religion and cheap vegetables. At the same time, it is attempting to suppress any news that might cause unrest among party supporters. By Bulent Mumay

The closer the local elections on 31 March get the more absurd the political squabbling in Turkey becomes. The AKP government, which has been in power for 17 years now, is not prepared to admit any of its failures. The cost of living is being blamed on the traders, the increase in interest on the banks, the rise in the dollar on the United States, the flare-up of terrorism on the opposition. It is evading responsibility in a bid not to lose any votes in the face of the economic crisis.

God is even being brought into play to win back voters. Ismet Yilmaz, a top AKP official, promised all those who vote for his party: "Voting for our candidate means salvation on Judgement Day". At the same time, we learnt that voters who refuse to vote for the AKP are in grave danger. The AKP candidate for Izmir warned at his presentation meeting: "God will punish those who do not vote for the AKP!"

I don't know to what extent this threat is realistic, but I am sure that no matter whether you vote for the AKP or not, there is no salvation from "punishment" in this system.

The calamities triggered by politicians in their greed for votes can hit everyone, regardless of whether they are AKP voters or not. Recently, 21 people died because politicians closed their eyes to illegal construction for the sake of winning votes. A seven-storey residential building collapsed in Istanbul, which is known for its earthquakes – despite the fact that there was no tremor. 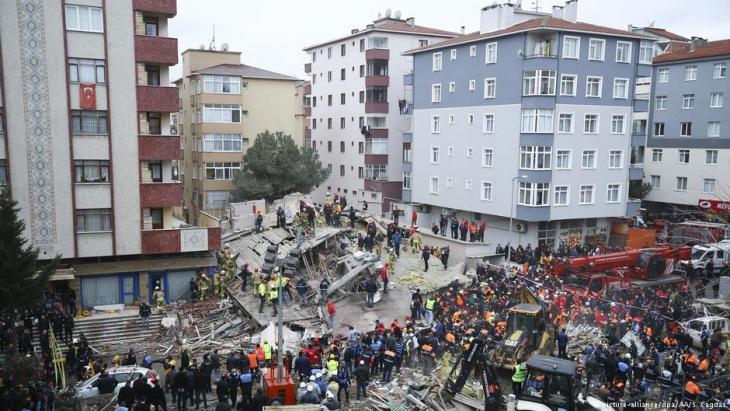 House of cards: after the momentous collapse of a residential building in Istanbul with 21 dead, Turkish President Recep Tayyip Erdogan announced there would be consequences. "We have a lot of lessons to learn," said Erdogan on visiting the scene. Really? No one has yet been called to account

In a tawdry bid to secure votes, a building that had yet to be inspected and approved was allowed to be connected to the electricity, water and gas supplies. In fact, prior to the elections on 24 June 2018, the government announced an amnesty for those builders willing to pay a few lira to the state for their illegal constructions. The block that collapsed in Istanbul is just one of tens of thousands of illegal buildings that the government legalised to collect votes and money.

Now you might expect that after the catastrophe, which cost 21 people their lives, those responsible would resign, the building amnesty would be called off and everything would be done to combat illegal construction, in an attempt to prevent new disasters, right? But that is not the way the system works in Turkey. In Turkey, those in power are past masters in the art of self-exoneration. Sure, they will visit the ruins and pose with sorrowful demeanour. They will even embrace grieving family members at the funeral, but they wonʹt accept responsibility.

This is exactly what happened after the recent fiasco in Istanbul. Nobody was prepared to take the blame. The only government action in the wake of the disaster was to impose a news blackout. They were not interested in who was responsible for the apartment building collapsing like a house of cards. After all, were a scandal to emerge before the elections, involving AKP officials who tolerated illegal construction, it would cost the administration votes.

Catapulted into the top five

The days leading up to the elections are numbered; nothing that might negatively impact the AKP vote is tolerated. Various attempts are being made to prevent any information that might offend AKP supporters from reaching the public.

Recently a member of the Egyptian opposition, Muhammed Abdulhafeez Hussein, entered Turkey via Somalia and applied for asylum. But because he was on the list of "criminals to be extradited", he was arrested. Although a death sentence awaited Hussein in Egypt, he was deported from Istanbul airport to Cairo the next day and delivered into the hands of the hated Sisi regime.

The Turkish authorities learned of this scandal thanks to a photograph taken by a cleaning worker when Hussein was put on the plane. Once a minor media outlet had reported the incident, protests began to flood in, particularly from the AKP rank and file: "How could we extradite a man to Sisi, when it was common knowledge that he would be executed?" Who do you think had to pay the bill this time? Not the government, that's for sure. Emin Celik, the worker who took the photo, was arrested on the bizarre charge of sedition.

Hot on the heels of this flagrant misconduct on the part of the Turkish Foreign Ministry, another scandal emerged, the circumstances of which related to the Foreign Office. Seyda Cavusoglu, a niece of Minister Mevlut Cavusoglu, ranked 48 out of 49 applicants in the entrance examination for a Master's degree course.

When the name Cavusoglu nevertheless appeared on the list of the five accepted candidates, the uproar on social media was deafening. Inevitably, the story broke in the wider public domain. The report about this instance of favouritism, which has become the norm in Turkey, was destined to be concealed with the AKP's known skill. By court order, the list of points scored by the 49 students was removed from the university's website. And access to the pages that had posted the message was blocked.

The power of the economy 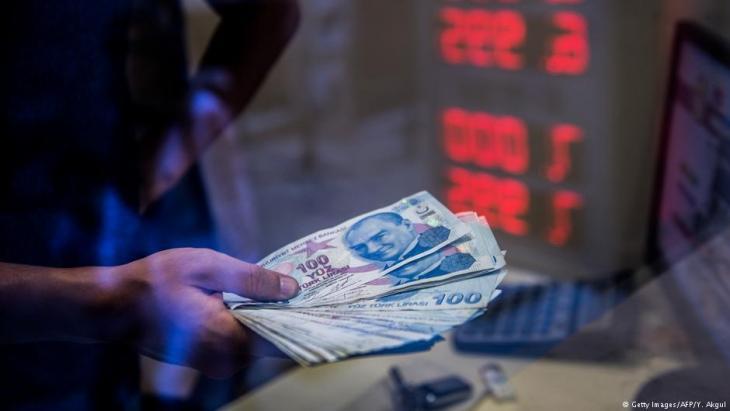 Turkish currency in free fall, Turkish economy in decline: "the government is well aware of the influence of the economy on voter behaviour. It has not been able to change prices, so it is now trying to change perception. Nationalism is once more coming to the rescue," criticises Bulent Mumay

It is not just media outlets that are suffering from repression, either. Even ordinary citizens voicing the slightest criticism of the palace may find the police on their doorstep. Retired teacher Abdurrahman Gezen, 96 years old, recently became the latest victim. He was summoned to police headquarters because he had shared an AKP-critical caricature on social media.

The purpose of these bans and investigations is to prevent certain truths from being made public. However, there are some facts that cannot be disguised, even by a court ruling. Such as the rise in cost of living, evident everywhere in Turkey recently. The price of staple foods, fruit and vegetables is rising at many times the official rate of inflation.

The government is well aware of the influence of the economy on voter behaviour. It has not been effect a change in the prices, so it is now attempting to alter peopleʹs perception. Nationalism is once more coming to the rescue.

The limits of propaganda

"Now they're clutching at tomatoes and peppers, making food a hot issue because they hope it will win them some votes. Didn't our soldiers in Idlib and Jarablus beat the terrorists with tanks and cannons? Go ahead: ask the potato and tomato merchants how much these weapons cost!"

Erdogan was trying to say that our economy is in such a sorry state because the government is being forced to divert money for ammunition. Although no new war, no new campaign had broken out before the economic crisis, he claims that everything has become more expensive because we are having to spend money on defending our resources.

Yet even Erdogan seems to have understood that propaganda is only effective to a certain extent. After this nationalist outburst he was forced to act. Unable to push down prices in the shops, the Turkish president began allowing fruit and vegetables to be sold off cheaply by the state. Mile-long queues formed to wait for the vehicles that drove up to the city squares.

The same people who say that everything is expensive because we have to spend money on ammunition have sold Turkey's one remaining tank factory to Qatar and set up a mobile greengrocers' instead! Our bridges and highways may be run by companies close to the palace, but the state has sunk to selling cucumbers and tomatoes.

This year Annemarie Schimmel, the great German scholar of Islamic studies, would have turned 100. Unique within the German and international academic community of her time, ... END_OF_DOCUMENT_TOKEN_TO_BE_REPLACED

The Palestinian militant organisation Hamas, with Hezbollah's help, is building up a military presence in Lebanon, the ultimate consequences of which could be devastating, writes ... END_OF_DOCUMENT_TOKEN_TO_BE_REPLACED

More and more voices are being raised in Turkey that challenge previous versions of the country's history. These alternative accounts, still largely ignored by official quarters, ... END_OF_DOCUMENT_TOKEN_TO_BE_REPLACED

Violence against doctors and lawyers in Turkey has been growing in recent years. But instead of taking action, the government is openly hostile towards two unions representing the ... END_OF_DOCUMENT_TOKEN_TO_BE_REPLACED

The Sufi Trail is a long-distance hiking route from Istanbul to Konya that seeks to revive the ancient tracks used by foot pilgrims on their way to Mecca. Marian Brehmer spoke to ... END_OF_DOCUMENT_TOKEN_TO_BE_REPLACED

Foresight is needed to turn the tide of German policy. Being independent of Russia must not lead to dependence on authoritarian regimes in the Middle East. By Kristin Helberg END_OF_DOCUMENT_TOKEN_TO_BE_REPLACED
Author:
Bülent Mumay
Date:
Mail:
Send via mail

END_OF_DOCUMENT_TOKEN_TO_BE_REPLACED
Social media
and networks
Subscribe to our
newsletter