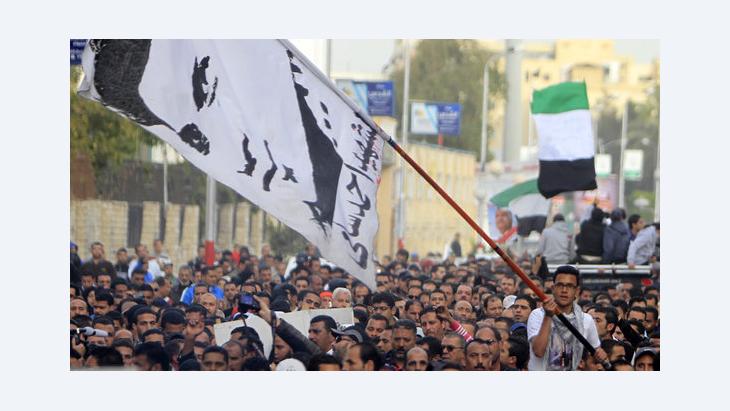 A year after the bloody clashes at Port Said's soccer stadium, people in the harbour town are horrified at the Draconian punishments that have been handed down to individuals who continue to deny any involvement in the riots. Karim El-Gawhary reports from Port Said

They are glued to the television screen in the Al-Sheef café in the centre of Port Said. It takes the judge several minutes to read out all the sentences in the soccer stadium riots of February 2012. Twenty-one death sentences already issued in January against Port Said fans were confirmed. Five new death sentences were pronounced. Twenty-eight people were acquitted. The remainder of the 73 accused were given prison sentences up to a maximum of 25 years.

The most politically sensitive cases were those of nine members of the police and security forces, accused of either inciting the clashes or at least failing to intervene. Two of these officials including Port Said's head of security were sentenced to 15 years in jail, while the others were acquitted.

After watching the verdicts, many of those present in the Port Said café collapse, crying and screaming, beating themselves over the head. Some just sit silently on the ground. "My brother Islam Loma was sentenced to death, and the big fish who are really responsible for all this didn't even stand trial," says one man.

He doesn't know with whom he should be more angry – the state and the government authorising these sentences or the supporters of rival soccer club Al-Ahly from Cairo, who refuse to rest until the 72 fans killed on the day of the riots are avenged with 72 deaths in Port Said, he says and breaks down in tears. 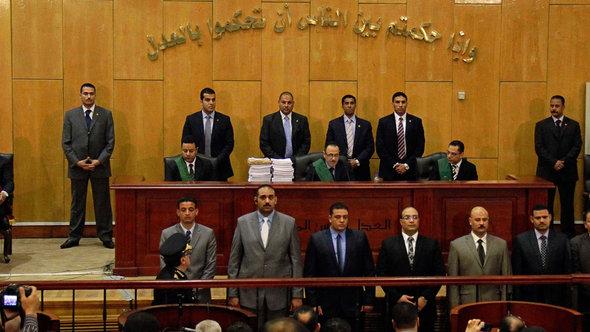 A trigger for new protests: On Saturday (9 March) in Cairo, the Egyptian judiciary confirmed death sentences against 21 people for involvement in the deadly soccer riots in Port Said, and imposed several lengthy sentences on others. Of the nine security officials initially sentenced, seven were acquitted

In actual fact, if this is a goal it has already been attained. In addition to what are now 26 death sentences, 50 people have already been killed in unrest following the initial sentencing in January this year.

Just a few minutes after Saturday's ruling (9 March), an angry mob gathered at the police headquarters in the city centre, the scene of several bloody protests in recent weeks. But the interior ministry ordered that the building be cleared on the eve of the verdict, and has moved its police force out of the city. The military has been patrolling the streets ever since. This was probably one of the main reasons why Port Said remained relatively peaceful after the ruling.

The military, with its close links to towns and cities on the Suez Canal where most Egyptian troops are stationed, is currently accepted by the people as a law-enforcing authority. Military officers were seen to be verbally engaging with the furious crowd.

Hosni El-Kheiyat is among that crowd. The blind man is led across the square by a young man. "My only son has been given a life sentence. He wasn't even 18 years old when he was arrested," says the blind man, his eyes staring ahead, the tears running down his cheeks. His son just happened to be having a drink close to the stadium and was arbitrarily arrested, he's not even interested in football, says the man. "By God he's innocent," he cries, pulling a photograph of his son out of a small folder and holding it up. The picture shows a young man with an almost childlike appearance, now expected to remain in prison for 25 years.

Indeed, police officers have been repeatedly quoted in the Egyptian media as saying that random arrests were made, often on nothing more than a hunch. "We arrested hundreds of people and it's quite possible that innocent people were sentenced," one police officer is quoted as saying.

Abu Hommus is a prominent member of society here in Port Said. Everyone knows him, the father of a young man who is one of the leaders of the Port Said fans, generally referred to by his nom de guerre "Hommus". His real name is Muhammad Shahata, and his death sentence has now been confirmed. Every few minutes, Abu Hommus is greeted and hugged by people on the street. He says he was at the stadium with his son and that the two of them went home. 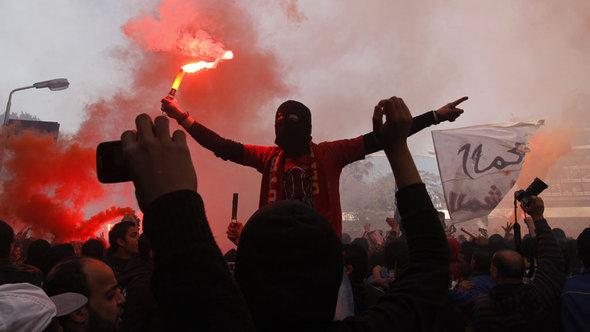 Joy and satisfaction at the judge's decision: Supporters of the Cairo club Al-Ahly, known as "ultras", accuse the police of failing to intervene to stop rioting in Port Said's soccer stadium in February 2012. They had been demanding tough sentences for Port Said fans who they blame for the deaths

"We only found out about all the fatalities when we turned on the television," he says. Most of the casualties were people who were trampled and squashed because the stadium door on the Al-Ahly side had been welded shut, he says. "None of us realised that," says Abu Hommus. A week later, the police came to fetch his son.

On the day of the initial sentencing, 26 January 2013, Abu Hommus waited outside the prison in the firm belief that his son would be released and that he would be able to collect him. The pronouncement of the death sentences triggered serious unrest. The crowd fired live ammunition from the rooftops, he says. He remembers a young man saying: "Abu Hommus go back, it's too dangerous," before he was shot in the head and collapsed next to him.

They deployed snipers, Abu Hommus is certain, most of those killed that day had been shot in the head, neck or heart. He was in the military himself, he says, and knows exactly how it works.

The entire trial was anything but fair, he says. Most Egyptians are Al-Ahly fans, and Abu Hommus believes the verdicts were intended to pacify them at the expense of the small town of Port Said. He pledges to continue with the campaign of civil disobedience in Port Said, which has resulted in the closure of most shops, state institutions and schools for several weeks now.

"We'll only stop when our demands have been met, when the stadium riots trial has been reopened and those responsible for the deaths in Port Said in the clashes have been called to account, first and foremost the Interior Minister and the president and Muslim Brother Muhammad Mursi," he says.

The regime hits back

The people of Port Said and Abu Hommus agree with Al-Ahly fans in one respect. The security forces played an underhand role in the riots. The Ahly fans were on the frontline in the uprising against Mubarak and the Egyptian police had a few scores to settle with them. "They used us to get even with the Ahly fan," says Abu Hommus. His story echoes that of both Ahly and Port Said fans. On the day of the match, police presence was minimal and there were no security checks. 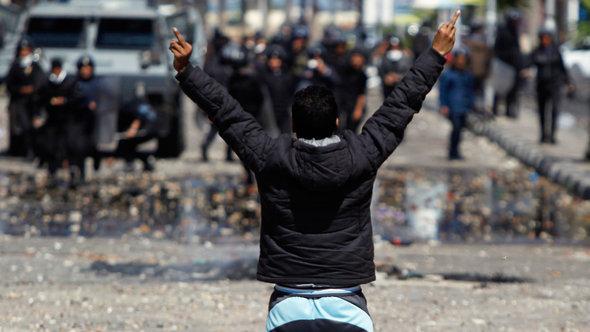 A city in a perpetual state of emergency: 31 people were killed and more than 300 injured in unrest in Port Said following the initial verdicts in January. There were also clashes at the funerals of those killed in the stadium catastrophe

"Although they normally open every bottle of water and packet of cigarettes," says Abu Hommus. He also speaks of "outsiders" bussed to the stadium, people unfamiliar to both sets of fans. "We were assigned the blame and the Ahly fans were left dead. They killed two birds with one stone," – is his view, one shared by many people in Port Said who deny any role in the riots.

Taunting those sentenced to death

But like most people in the town, Abu Hommus cannot imagine a reconciliation with Ahly fans. "They danced on our corpses and taunted those sentenced to death, that's not something you can simply forgive," he adds.

At one of the demonstrations, a young man suddenly emerges from the crowd. "I'm number 21 of those sentenced to death – in absentia," he introduces himself. Twenty-eight-year-old Mahmud Salah watched his own death sentence being pronounced on television last January, as a free man. "I went to a café at half-time, there are witnesses," he says. He says he has been arrested and released several times. Four days before the ruling, he was ordered to report to the police station.

"I didn't go. I've been on the run ever since, I can't spend the night at home. I don't know what's going to happen," he explains. Then he disappears again into the crowd, protected by the people of Port Said who know him, but far beyond the reach of the police, who have given up on the Suez Canal city.

Tourists have been returning to Tunisia, Egypt and Morocco. But, given the global uncertainty caused by the Ukraine war, will the comeback be enough to save a struggling sector, ... END_OF_DOCUMENT_TOKEN_TO_BE_REPLACED

In this essay, renowned Lebanese journalist and writer Hazem Saghieh asks whether the Arab Levant, which stretches from Iraq in the east to Egypt in the west, will remain an ... END_OF_DOCUMENT_TOKEN_TO_BE_REPLACED

By 2050, the Middle East and North Africa could be dealing with many more elderly people suffering from dementia. A lack of facilities, specialists and local knowledge means the ... END_OF_DOCUMENT_TOKEN_TO_BE_REPLACED

With his fist bump greeting for a man he previously called a pariah, US President Biden has paved the way for Saudi Crown Prince Mohammed bin Salman's return to the international ... END_OF_DOCUMENT_TOKEN_TO_BE_REPLACED
Author:
Karim El-Gawhary
Date:
Mail:
Send via mail

END_OF_DOCUMENT_TOKEN_TO_BE_REPLACED
Social media
and networks
Subscribe to our
newsletter