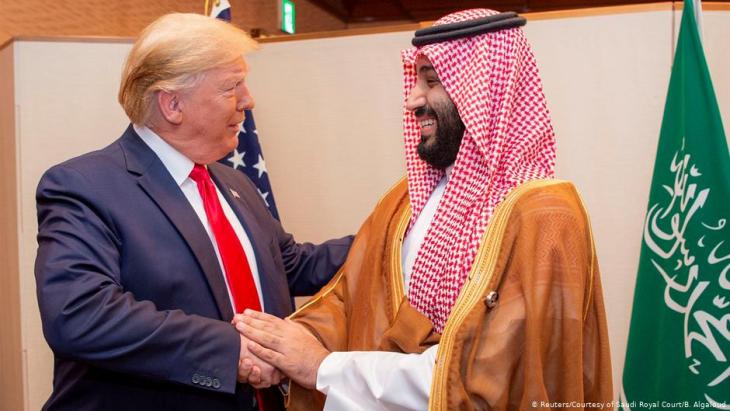 In an April 2 phone call, Donald Trump told Saudi Crown Prince Mohammed bin Salman that unless the Organization of the Petroleum Exporting Countries (OPEC) started cutting oil production, he would be powerless to stop lawmakers from passing legislation to withdraw U.S. troops from the kingdom, four sources familiar with the matter revealed.

The threat to upend a 75-year strategic alliance, which has not been previously reported, was central to the U.S. pressure campaign that led to a landmark global deal to slash oil supply as demand collapsed in the coronavirus pandemic – scoring a diplomatic victory for the White House.

Trump delivered the message to the crown prince 10 days before the announcement of production cuts. The kingdom’s de facto leader was so taken aback by the threat that he ordered his aides out of the room so he could continue the discussion in private, according to a U.S. source who was briefed on the discussion by senior administration officials.

The effort illustrated Trump’s strong desire to protect the U.S. oil industry from a historic price meltdown as governments shut down economies worldwide to fight the virus. It also reflected a telling reversal of Trump’s longstanding criticism of the oil cartel, which he has blasted for raising energy costs for Americans with supply cuts that usually lead to higher gasoline prices. Now, Trump was asking OPEC to slash output.

We defend while you destroy

A senior U.S. official revealed that the administration notified Saudi leaders that, without production cuts, “there would be no way to stop the U.S. Congress from imposing restrictions that could lead to a withdrawal of U.S. forces.” The official summed up the argument, made through various diplomatic channels, as telling Saudi leaders: “We are defending your industry while you’re destroying ours.”

Trump was asked about the talks in an interview Wednesday evening at the White House, at which the president addressed a range of topics involving the pandemic. Asked if he told the crown prince that the U.S. might pull forces out of Saudi Arabia, Trump said, “I didn’t have to tell him.”

“I thought he and President Putin, Vladimir Putin, were very reasonable,” Trump said. “They knew they had a problem, and then this happened.”

Asked what he told Crown Prince Mohammed, Trump said: “They were having a hard time making a deal. And I met telephonically with him, and we were able to reach a deal” for production cuts, Trump said.

Saudi Arabia’s government media office did not respond to a request for comment. A Saudi official who asked not to be named stressed that the agreement represented the will of all countries in the so-called OPEC+ group of oil-producing nations, which includes OPEC plus a coalition led by Russia.

Research project "The Global Qur'an", brainchild of Professor of Islamic Studies Johanna Pink and sponsored by the European Research Council, analyses the history and ... END_OF_DOCUMENT_TOKEN_TO_BE_REPLACED

With World Cup 2022 around the corner, Qatar has embarked on a campaign to clean up its school system. Distracting from grievous shortcomings in other areas by highlighting a ... END_OF_DOCUMENT_TOKEN_TO_BE_REPLACED

The catastrophic human rights situation in Bahrain is being largely ignored by the rest of the world. Despite all the damning evidence, which includes a Human Rights Watch report ... END_OF_DOCUMENT_TOKEN_TO_BE_REPLACED

The city of Marib is the most important place of refuge in Yemen for those displaced in the country. But fighting between Houthi rebels and government troops is currently ... END_OF_DOCUMENT_TOKEN_TO_BE_REPLACED

Ankara is seeking to improve its relations with several states in the Middle East – such as the United Arab Emirates, Egypt and Israel. There are several reasons for this. ... END_OF_DOCUMENT_TOKEN_TO_BE_REPLACED

Despite Syria's lengthy civil war, dictator Bashar al-Assad is now being courted by many governments in the Middle East as if nothing ever happened. The reasons for this vary. By ... END_OF_DOCUMENT_TOKEN_TO_BE_REPLACED
Date:
Mail:
Send via mail

END_OF_DOCUMENT_TOKEN_TO_BE_REPLACED
Social media
and networks
Subscribe to our
newsletter