In Qom, 40,000 foreign seminary students are currently studying Shia theology. Subsequently they are supposed to promote Shia Islam with missionary zeal in their home countries and, if necessary, fight for it. Seven hundred of them are from China. Truly, the soul of the Islamic Republic resides in Qom.

Yet surely God would never allow the inhabitants of such a city to be afflicted by such a terrible plague. On 17 February, Gholamerza Jalai appeared in front of the television cameras in the uniform of the Revolutionary Guard, spoke about the God-given immunity of the holy city and categorically denied everything that was already an open secret: there was not a single coronavirus case in Qom or anywhere else in the country. Jalai should know; he is the head of Iranian civil defence. But the lies and denials did not last long.

Lies no match for the virus

Seventy-two hours later, the deputy health minister reported the death of two people infected with COVID-19 in Qom. Three days later, 12 people were dead, but only 47 infected. No one believed these numbers. On the same day, Assadollah Abasssi, a parliamentary representative from Qom, told journalists that he had personally given the names of 50 coronavirus deaths to the deputy minister. The latter replied that Abasssi should prove that these deaths had indeed been caused by the virus. The deputy minister has since disappeared from public view, because he himself became infected with COVID-19. 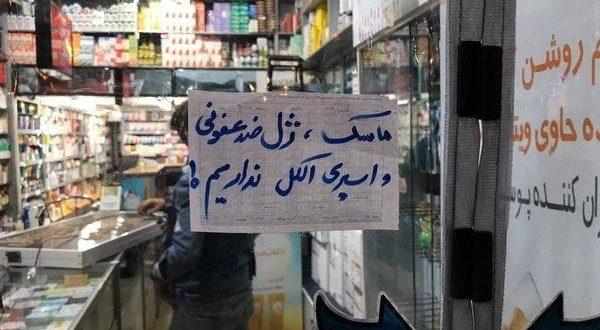 Between quarantine and lack of medical care: signs in this shop in Qom point out the shortcomings in the country – "We have no protective masks, disinfectant gels and alcohol sprays". Iran is the most affected country by the coronavirus after China. So far 514 people have died, 11,364 have already been infected

The tissue of lies surrounding the shooting down of the Ukrainian passenger plane by the Iranian Revolutionary Guard on 8 January lasted only three days. The coronavirus fairy-tale lasted several weeks. The reason: for one thing, there was no pressure from abroad. Secondly, the rulers had two important dates in this period for which they needed organised crowds: 9 February – the anniversary of the revolution – and the parliamentary elections on 21 February.

Once these important dates had passed, a few journalists and doctors dared to ask whether one should not learn from the Chinese and quarantine the city of Qom. A wave of outrage, a deafening outcry from the most influential ayatollahs immediately swept across the country – and the questioners fell silent. The sick of this world sought and found healing and health at the shrine in Qom, no one was allowed to quarantine the holy city, said Ayatollah Saidi, the Supreme Servant of the holy shrine.

So Qom remained accessible to everyone, the virus had free rein. And thus it spread rapidly throughout the country. Thirty-one provinces of Iran are now affected. Gilan and Mazandaran, the two northern Iranian provinces on the Caspian Sea, have now replaced Qom and are now the most dangerous places for the virus to spread.

Officially there are 514 dead and 11,364 infected in Iran to date (as of 13 March 2020). But social media and independent websites give a completely different picture. No one believes anyone anymore; the stewards of faith have utterly forfeited their credibility.

Powerlessness wherever you look

Whether the rulers in Tehran can cope with this drama and how is difficult to predict. In its more than 40-year history, the Islamic Republic has lived constantly in and from crisis. But the coronavirus crisis surpasses everything that has gone before, because it has struck the country when it was already in desperate straits. To all intents and purposes, the regime is diplomatically and economically isolated, and now an epidemic quarantine has been added to the mix. Every one of Iran's borders with its neighbouring countries is sealed. This is a turning point in the history of this hybrid state, which calls itself a republic.

On Friday, Iranians head to the polls to elect a new president. What's at stake in this presidential election? Sanam Shantyaei explains. END_OF_DOCUMENT_TOKEN_TO_BE_REPLACED

For centuries, the great classical Persian author Hafez has inspired German writers. Translations, adaptions and homages have been created in his wake, and the process continues ... END_OF_DOCUMENT_TOKEN_TO_BE_REPLACED

In the run up to Iran’s presidential election, Supreme Leader Ayatollah Ali Khamenei has sought to entrench his power. Alex Vatanka asks whether a sharp slump in voter turnout ... END_OF_DOCUMENT_TOKEN_TO_BE_REPLACED

Turkey's parliamentary and presidential elections are scheduled for June 2023. But they are already casting a shadow. While the opposition is calling for early elections, ... END_OF_DOCUMENT_TOKEN_TO_BE_REPLACED

Despite promises to the contrary, the social and economic situation in Iran deteriorated under President Rouhani, prompting two nationwide revolts in recent years. Yet the social ... END_OF_DOCUMENT_TOKEN_TO_BE_REPLACED
Author:
Ali Sadrzadeh
Date:
Mail:
Send via mail

END_OF_DOCUMENT_TOKEN_TO_BE_REPLACED
Social media
and networks
Subscribe to our
newsletter