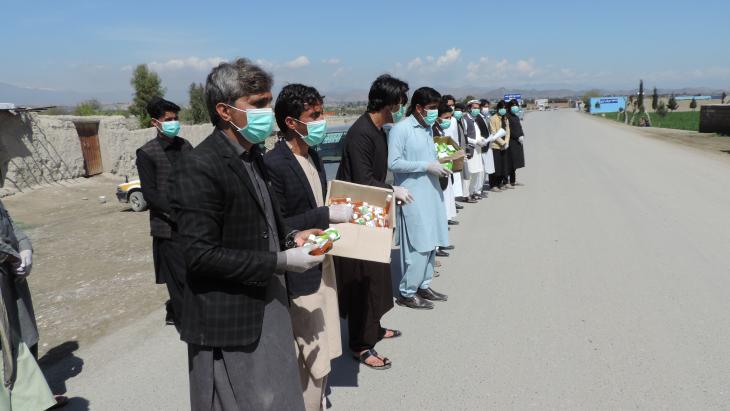 COVID-19 in Afghanistan
"Millions of Afghans at risk"

So far, the number of confirmed COVID-19 cases and deaths in Afghanistan has been relatively low. But due to a severe lack of coronavirus tests and ventilators, suitable laboratories to process samples, ongoing fighting between the Taliban and government forces and a sluggish and uncoordinated response to the pandemic, the health threat to Afghanistan is very large and very real. By Emran Feroz and Mohammad Zaman

"This is wrong, and it needs to stop. Especially now," said Dr. Sayed Shah, a medic from Baghlan province, which is still one of the most insecure regions in Afghanistan. Dr. Shah echoes concerns shared by many Afghans about ongoing fighting between the Taliban and the Afghan National Army while COVID-19 reached large parts of Afghanistan. "Let's be realistic. We are not prepared for this crisis. I don't have any tools to test anyone. Many local medics all over Afghanistan are in the same situation. We don't have a simple laboratory for tests," he said.

Thus far, Afghanistan has reported 367 COVID-19 cases and four deaths, but observers and medics on the ground believe that the real number of infections could be much higher. A majority of the infected people are from Herat province, which shares a border with Iran, a country that has been hit heavily by the pandemic.

Overall, there is a shortage of coronavirus tests and ventilators. The World Health Organization (WHO) provided Afghanistan with 1,500 testing kits, yet only two laboratories in the entire country are equipped with machines that can process test samples.

"We try testing everyone who was in Herat or who used to have contact with people from there. We are also focusing on people with general symptoms," Shah said. He described how he and other medics were taking samples from suspected infected patients and sending them to Kabul, "which is a very toilsome procedure." 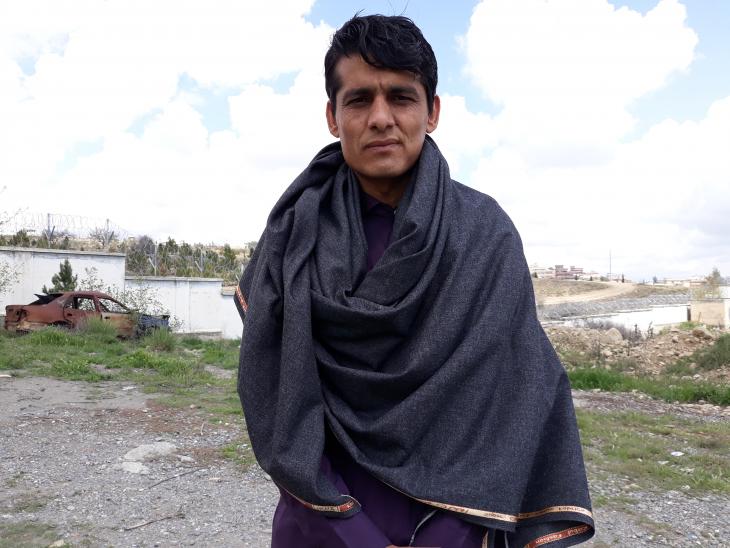 "Thus far, Afghanistan has reported 367 COVID-19 cases and four deaths, but observers and medics on the ground believe that the real number of infections could be much higher," write Emran Feroz and Mohammad Zaman. According to local activist Shah Mohammad Takal (pictured here), many people are not well-informed and are not taking the threat seriously: "especially in remote areas, people don't know anything about the virus," he says

Fighting hampers every aspect of the response

The route to Kabul takes at least four hours because of the distance and includes passing the mountainous Salang Pass with its decades-old roads. Sometimes, the travel route through Baghlan is not passable because of skirmishes between insurgents and security forces which take place almost daily. "Baghlan always used to be a violence hotspot, but these days it's totally unbearable. They [soldiers and insurgents] should lay down their arms and work as health workers to save lives," said Mohammad Shahzad, a local.

On Thursday night, power in the region was cut off due to clashes between Taliban fighters and Afghan soldiers in Baghlan. "They endanger the lives of patients. It was not just us who lost power. Large parts of the country were affected," Dr. Shah said. The Taliban rejected that their operations caused the cut-off and claimed that a power pole was damaged "because of weather circumstances."

After the Taliban signed a withdrawal agreement with the United States in Qatar a month ago and stopped attacking American forces, fighting between Afghan factions continued. On 20 March, as Afghans were celebrating New Year or Nawroz, Taliban fighters attacked an outpost in Zabul province and killed at least 24 Afghan soldiers, which caused outrage all over the country. A day later, an airstrike in Kunduz province killed 11 members of one family – all victims were civilians. Last week, Afghan troops killed or wounded at least nine Taliban insurgents in Jawzjan province.

According to Emran Feroz and Mohammad Zaman, many civil society activists in the country are unhappy with the response of the government and the Taliban and have decided to take action themselves. Pictured here: activists in Khost hand out information leaflets about COVID-19 to passing drivers

A looming catastrophe and a political charade

Many international observers believe that COVID-19 would lead Afghanistan into another catastrophe and urge both the Afghan government and the Taliban to stop fighting immediately and start working together with the United Nations and aid agencies to improve access to health care to save as many lives as possible. Unfortunately, it seems that both parties are unwilling to co-operate with each other. Lastly, political elites in Kabul are still divided since both President Ashraf Ghani and Chief Executive Abdullah Abdullah declared themselves the winners of the October 2019 presidential election and conducted separate inauguration ceremonies last month. Reportedly, several politicians and strongmen are still busy resolving differences between Ghani and Abdullah, but no official word has been released.

But the timing of the political charade and the ongoing conflict could not be worse. Rather than taking steps to prevent the spread of COVID-19, all parties are trying to depict themselves as saviours who are apparently well-prepared for the fight against the virus. Local television stations constantly remind their viewers to stay at home, while government officials, like Health Minister Ferozuddin Feroz, repeatedly appear in the news undermining the importance of social distancing and the use of sanitizers. President Ghani and his cabinet members appear with masks and gloves from time to time and have stopped hugging each other when greeting, while some well-known Afghan singers have even composed songs about COVID-19 and spread them on social media. One of them, sung by famous singer Farhad Darya, was even used by local security forces to raise awareness.

After days of waiting, Herat has been put under quarantine by the government. Kabul is also facing a shutdown, and for the first time in years, many famous places like the Mandaii, the capital's historic open-air market, are almost completely empty.

The Taliban started their very own anti-corona campaign. In Herat's Shindand district, which is largely controlled by the insurgents, a Taliban Health Commission gathered to "prevent the spread of the virus" and "to raise public awareness". "The spread of COVID-19 is an important issue for us. We have taken all measures to fight against it as strong as possible, and we also have a structured plan," Taliban spokesman Zabihullah Mujahed said in a telephone interview. He described how his group has already put several people under quarantine and how insurgents reach out to remote villages via motorcycles to distribute leaflets, soap bars and sanitizers. "We are especially focusing on returnees from Iran and told them that they should start a self-quarantine," Mujahed said. 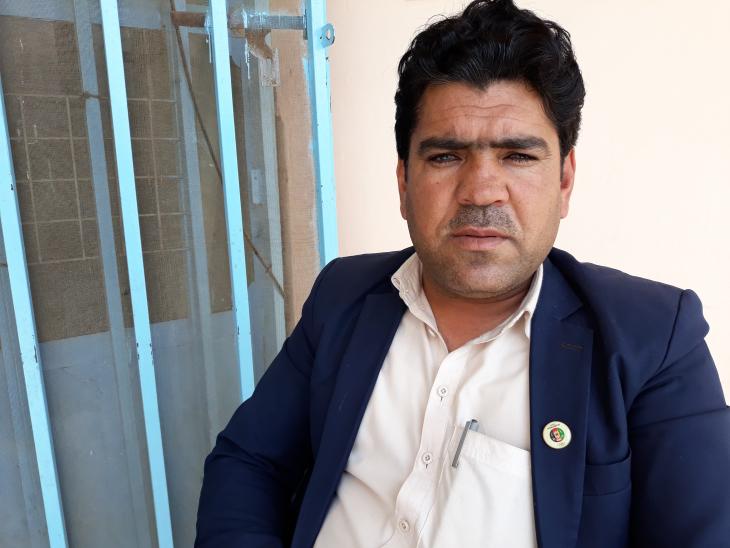 Sayed Qabil Shah Miakhel (pictured here) lives in Khost city but has many relatives in remote Afghan villages. In recent days, he has informed them himself about COVID-19. Together with other activists, he has distributed information leaflets, soap and blankets

On Wednesday, the Taliban declared they would uphold a ceasefire in areas under their control if they are hit by a coronavirus outbreak. The group also said it would guarantee the security of health and aid workers travelling to their areas offering assistance to prevent the spread of the virus.

"The spiralling COVID-19 crisis puts millions of Afghans at risk, yet Afghan officials are consumed with infighting and the Taliban with adversarial posturing," said Patricia Gossman, associate Asia director at Human Rights Watch. "The two sides need to work together with the UN and humanitarian agencies to ensure that aid reaches the whole country, or a dire situation will become catastrophic."

But it is not just the Taliban or the government who reach out to remote places to warn villagers about COVID-19. Large parts of Afghanistan's civil society are not satisfied with the reaction from either side regarding the crisis and have decided to take action. In Afghanistan's south-eastern province of Khost, young activists are taking the fight against the spread of the virus seriously. "People, especially in remote areas, don't know anything about the virus. They have not ever heard of corona. It would end in a catastrophe if they remain uninformed," said Shah Mohammad Takal, a local activist.

Since Takal and others have raised awareness, efforts have begun to ban overcrowding in the province. Several hotels have already closed, as all types of meetings have been prohibited for the time being. Officials from the public health departments are trying to scan all passengers on the routes leading to the city. Over the past few days, 8,000 masks, soap bars and blankets have been distributed to the public. "It's just a matter of time until we record the first infection in Khost. Western countries are struggling, so we can imagine how difficult it is for Afghanistan. But we try our best to fight the virus," Takal said.

Since returning to power in Afghanistan, the Taliban have steadily eroded the rights and opportunities of women and girls, particularly their access to education. But Afghans are ... END_OF_DOCUMENT_TOKEN_TO_BE_REPLACED

Since seizing power in mid-2021, the Taliban have continued to restrict the rights of Afghan women and girls. At the end of 2022, they banned women from attending higher education ... END_OF_DOCUMENT_TOKEN_TO_BE_REPLACED

German imams have publicly expressed their solidarity with the women of Afghanistan. In a letter of protest, the clerics say that the Taliban regime's decree barring women from ... END_OF_DOCUMENT_TOKEN_TO_BE_REPLACED

At the end of every year, the team at Qantara.de gives you a run-down of the ten most-read articles on the site over the past 12 months. Here is a quick overview of the stories ... END_OF_DOCUMENT_TOKEN_TO_BE_REPLACED

The "Weiter Schreiben" (Keep Writing) project promotes literature from war-torn and crisis-stricken regions and has, most recently, shone its spotlight on Afghanistan. Afghan ... END_OF_DOCUMENT_TOKEN_TO_BE_REPLACED

The Islamic Republic has been unable to quell the civil unrest that erupted three months ago, after Mahsa Amini died after being detained for violating hijab rules. Now the ... END_OF_DOCUMENT_TOKEN_TO_BE_REPLACED
Author:
Emran Feroz & Mohammad Zaman
Date:
Mail:
Send via mail

END_OF_DOCUMENT_TOKEN_TO_BE_REPLACED
Social media
and networks
Subscribe to our
newsletter