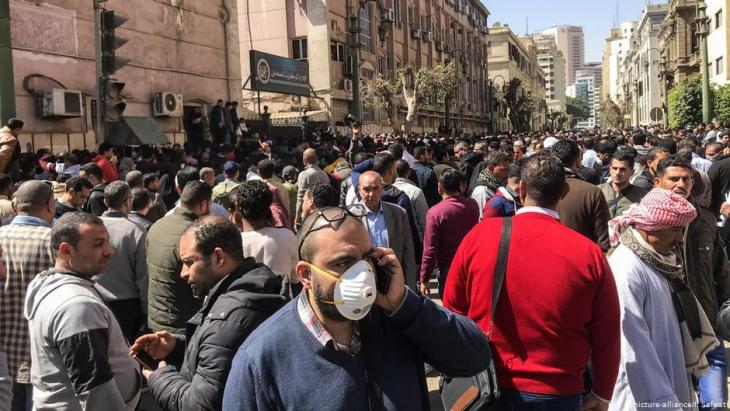 Healthcare systems in Tunisia and Egypt are in a catastrophic state. The governmental response to the crisis in both nations could not be more different. Sofian Philip Naceur reports from Tunis

The streets are totally deserted; an eerie silence descends after dusk sets in. The only sounds in the distance are that of a car accelerating and the muffled hum of a military helicopter circling over a Tunis suburb. For days now, the helicopters have been doing their rounds patrolling the national night-time curfew from the skies.

In Tunisia, people are now only allowed to leave their homes during the day in an emergency or absolutely essential errands. Public life has ground to a halt. Schools, universities, cafes, restaurants and mosques have been shut until further notice. Industry has been paralysed as well as all public transport, ferries and air traffic.

After the epicentre of the Covid-19 pandemic moved to Europe, the virus is now spreading rapidly through North Africa and forcing authorities to react. Governments in Tunisia and Egypt are utilising more or less the same measures applied in China and Europe to stop the pandemic in its tracks; drastic restrictions on everyday- and economic life and limitations on freedom of movement. The actual number of cases may still be far behind that of Europe and China. But the confirmed infection rate has risen sharply in recent days here too.

Thus far, Tunisia has confirmed 173 infections and five deaths; in Egypt there have been 456 confirmed corona cases and 21 deaths (25 March). But the true figures are likely to be much higher. The World Health Organisation (WHO) is now advising nations to conduct mass testing, not just in suspected cases. 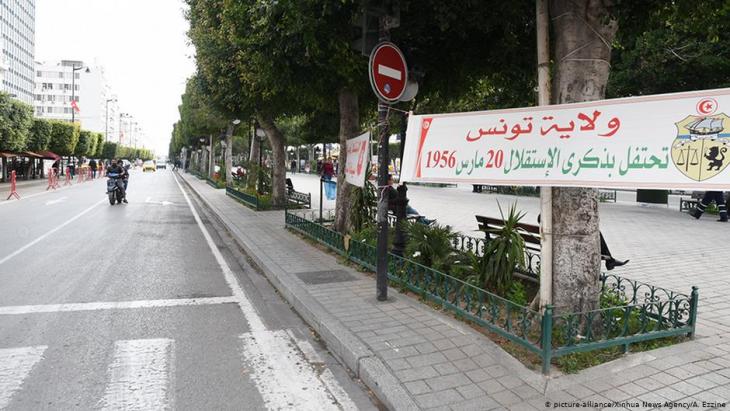 Empty streets in the Tunisian capital Tunis: given its weak health system, Tunisia could also be facing disaster, as the North African country is nowhere near equipped to deal with the corona pandemic. Public hospitals lack essential equipment as well as an adequate supply of medication, gloves and masks. Even before this crisis took hold, the health service was stretched to breaking point

But neither Tunisia nor Egypt have the means to do this. The healthcare systems of both nations are nowhere near ready to overcome the pandemic. Public hospitals lack essential equipment as well as an adequate supply of medication, gloves and masks. Even before this crisis took hold, the health service was stretched to breaking point.

Consequently, both nations could be heading towards disaster. It is therefore crucial how and above all when the relevant authorities react and their rhetorical presence in the crisis. The approach of governments in Tunisia and Egypt could however not be more different. While Tunisia responded proactively, throwing its weight behind a robust public relations offensive, Egypt has reacted to Covid-19 in a tardy, trivialising fashion – with potentially devastating consequences.

By April we will know whether Tunisia, with its strategy of anticipation and transparency, has weathered the crisis more effectively than Egypt. So far however, the Tunisian government – led by Prime Minister Elyes Fakhfakh and formed just a short time ago in late February – is credited with a relatively prudent and swift response.

Directly after it became known that the first patient had tested positive for the virus in early March, the authorities began taking the temperatures of passengers arriving in the country at ports and airports and placing people arriving from Italy in quarantine.

When on 9 March the number of confirmed infections rose from two to five, the government wasted no time in ramping up the precautionary measures. Over the two weeks that followed, President Kais Saied and Fakhfakh enacted new restrictions on a daily basis and have since then taken consistent and straightforward steps to bring the country to a halt.

In the meantime, the government’s public relations strategy was even more important that the concrete measures taken to combat the virus. The health ministry media briefing, held every morning since the beginning of March, conveyed the seriousness of the situation not only to local media, but also encouraged the general population to take greater care. Suddenly, respiratory masks and gloves became a common sight on the streets. 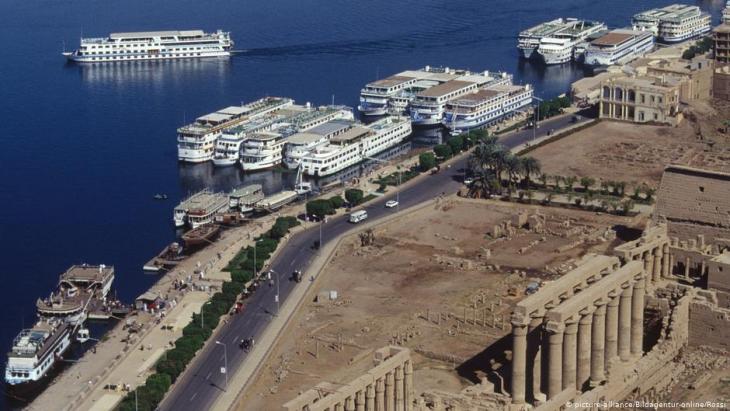 Luxor, epicentre of coronavirus spread in Egypt? In Luxor, 45 people tested positive on board a cruise ship sailing on the Nile. According to official figures, about 170 people were on board, including about 100 foreigners

Following the attainment of pandemic phase 1 and despite the low number of cases, the government enacted the steps in place for phase 2 – a strategy that the authorities justified with explicit references to the limited capacity of the healthcare system. The police force is also taking rigorous action against those who flout curfew restrictions.

But despite this proactive approach, the crisis in Tunisia is far from over. Hospitals in Sousse and Monastir are reporting their first infections among staff, while the health ministry recently explained with some consternation that many of the new cases could not be traced back. This means the actual number of cases is probably much higher than the official statistics suggest, the ministry says. The pandemic has not yet peaked in Tunisia and is likely have a serious impact on southern and western regions of the country where infrastructure has been neglected.

Egypt, on the other hand, could be even harder hit by the pandemic; authorities there have reacted to the crisis with extreme sluggishness. After the first domestic case was confirmed in early February, government representatives and pro-regime media initially actively played down the dangers of the pandemic. One TV show even staged an interview with the virus itself – represented by someone wearing a green mask speaking to the presenter of the show, explaining that Egyptians were immune – as members of the government continued to appease public fears.

After dozens of people tested positive for the virus on a Nile cruise ship in Luxor, staff and passengers were placed in quarantine. But it took almost two weeks for the government to switch from a cautious strategy to crisis mode – this despite mounting evidence that the virus could have spread much more quickly that the authorities were prepared to admit.

It was mid-March before the government announced the closure of schools and universities, recommended that the public stay at home and reduce social contact, and began work to disinfect public buildings. As Prime Minister Mostafa Madbouly announced these measures, he also made the absurd claim that the chances of being infected in Egypt were less than in other countries, due to the relative youth of the Egyptian population.

It took a few days before patients with breathing difficulties were separated from people with other health issues in public hospitals and special areas for possible corona cases were set up. Half-hearted calls to also stay away from mosques were largely ignored. Again, it took the government days to react, eventually instructing mosques and churches to close their doors.

In the meantime elsewhere in the public sphere, the regime led by President Abdul Fattah al-Sisi flexed its muscles in the usual way and had several people arrested for spreading “rumours and false information” on social media about the allegedly much more rapid spread of the virus in Egypt. The Egypt correspondent of the British newspaper The Guardian was stripped of her accreditation for an article quoting figures calculating the potential infection of several thousand people in Egypt.

Public health storm in the offing

It is clear that for a long time, Sisi’s regime has been more concerned about its reputation than about the consequences of the pandemic itself. At the latest after two high-ranking generals died of corona infections in late March, the government finally introduced more drastic measures, massively curtailing public life and imposing a curfew.

It remains to be seen whether these more stringent measures were introduced early enough. There are already increasing indications that the nation is about to be hit by a public health storm. Drawing on sources from the country’s association of medical professionals, the Internet daily Sada El Balad is reporting at least 26 infected hospital staff, including doctors and nurses, in several provinces. Several public clinics have also contacted the association to complain about the lack of masks and antiseptic, says the news platform Mada Masr.

In the fight against the coronavirus, the country is facing two main problems: the healthcare system is already in ruins and there are nowhere near enough beds in intensive care, let alone staff. Moreover, the two main high-risk groups are elderly people and smokers. Members of the latter group are two-a-penny in Egypt.

Should the pandemic hit Egypt even remotely as hard as Italy, the nation will face disaster. The authorities’ hesitant response could therefore have fatal consequences for many people in Egypt.

Home
Print
Newsletter
More on this topic
COVID-19 across the Islamic world – Fighting shy of coronavirusCOVID-19 in Iraq: Working under the coronavirus curfew in BaghdadCOVID-19 pandemic: The world’s religions and coronavirus
Related Topics
Abdul Fattah al-Sisi, Coronavirus, Health, Media in the Arab World
All Topics

For decades, Egypt's successive governments have neglected to provide adequate support for science and culture. Wouldn't it be wonderful if the coronavirus crisis were to lead to ... END_OF_DOCUMENT_TOKEN_TO_BE_REPLACED

Appointed to the Facebook oversight board, Yemeni Nobel Peace Prize laureate Tawakkol Karman has faced hostility from Arab state media and social media users, who accuse her of ... END_OF_DOCUMENT_TOKEN_TO_BE_REPLACED

The COVID-19 pandemic has triggered a public-health emergency and a steep reduction in oil prices, which represents a perfect storm for the Middle East, where everything from ... END_OF_DOCUMENT_TOKEN_TO_BE_REPLACED

Churches in the Middle East – Coptic, Eastern Orthodox, Maronite – typically share the conservative values of their Islamic surroundings. Yet the resistance of Arab Christian ... END_OF_DOCUMENT_TOKEN_TO_BE_REPLACED

Dubbed the "Butcher of Hama", Syria's Rifaat al-Assad is accused of embezzling millions in European real estate. Like him, many regional rulers have preferred to keep their ... END_OF_DOCUMENT_TOKEN_TO_BE_REPLACED

After a prolonged slump, tourist numbers in Hurghada had been expected to rise this year. Now there are quite literally no foreign visitors at all in the Red Sea resort. But all ... END_OF_DOCUMENT_TOKEN_TO_BE_REPLACED
Author:
Sofian Philip Naceur
Date:
Mail:
Send via mail

END_OF_DOCUMENT_TOKEN_TO_BE_REPLACED
Social media
and networks
Subscribe to our
newsletter