Since then it seems impossible to curb the excesses of this policy. Nobody dares discuss religious topics these days, because such voices are quickly branded as heretics and infidels and must fear for their own life and limb.

The current situation could have disastrous consequences. Pakistan is still at the beginning of the pandemic. If the number of infections rises dramatically, the already ailing Pakistani economy is likely to collapse completely.

A few weeks ago, one of the world's leading economists and professor at Princeton University, the Pakistani-born Atif Mian, advised the Pakistani government to take immediate action and implement a nationwide shutdown before the pandemic reaches a scale that would hit the country hard. 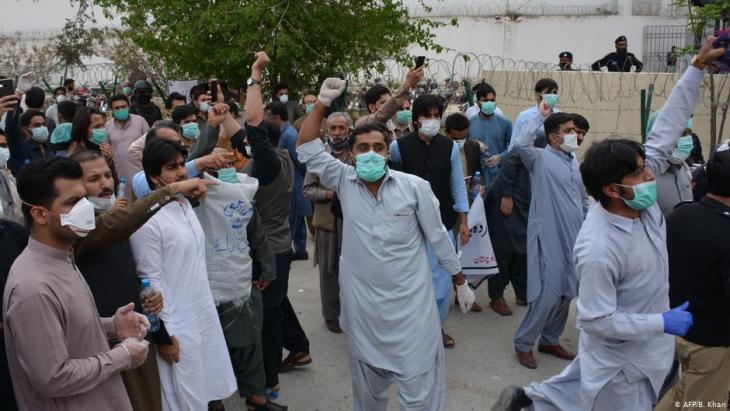 The Pakistani government is now finding it difficult to implement its own measures consistently. The measures are by no means anti-religious or even anti-Islamic. After all, in times of epidemics, Islam demands that protective measures be taken, since the protection of human life is one of the highest legal rights, the so-called maqasid ash-sharia.

During the Prophet Muhammad's lifetime, community prayers in mosques were suspended during storms and the Prophet himself commanded people to practice self-isolation in times of epidemics. Islamic theologians in Egypt or Saudi Arabia have derived their prohibition of gatherings in mosques from these accounts. Even the holiest mosques of Islam in Mecca and Medina are subject to such restrictions.

The clergy's defiant rejection of these measures is causing horror and disapproval in some sections of the Pakistani population.

The sooner Pakistani society and government puts religious leaders in their place, the better and more effectively the country will be able to tackle the pandemic. But it will take courage to do so.

Young performers in Lahore are shaping their lives outside the perceptions of Pakistani society, which views many art forms as obscene. As part of a new generation that hopes to ... END_OF_DOCUMENT_TOKEN_TO_BE_REPLACED

The Pakistani Taliban, known by the acronym TTP, are regrouping and reorganising, with their leadership headquartered in neighbouring Afghanistan, according to a U.N. report from ... END_OF_DOCUMENT_TOKEN_TO_BE_REPLACED

Every year in December, the team at Qantara.de takes a look back at the articles that proved most popular with our readers. This year is no different. Here is a run-down of the ... END_OF_DOCUMENT_TOKEN_TO_BE_REPLACED

In 1971, Bangladesh seceded from Pakistan after a bloody civil war to become independent. But the events of that time are still largely taboo today. A reappraisal of this central ... END_OF_DOCUMENT_TOKEN_TO_BE_REPLACED

"American*ish" – co-written by Aizzah Fatima and Iman K. Zawahry, and directed by the latter – is a rom com for an America too many don't want to acknowledge. Whereas most ... END_OF_DOCUMENT_TOKEN_TO_BE_REPLACED

The "War on Terror" has not only failed in Afghanistan, it has exacerbated insecurity and generated more terrorism. This is the main thrust of journalist Emran Feroz in his book, ... END_OF_DOCUMENT_TOKEN_TO_BE_REPLACED
Author:
Mohammad Luqman
Date:
Mail:
Send via mail

END_OF_DOCUMENT_TOKEN_TO_BE_REPLACED
Social media
and networks
Subscribe to our
newsletter