People in Morocco are also showing respect for what the government and security forces, which are monitoring the implementation of measures during this public health emergency, are doing. In this way – and after all the negative developments and notes of discord that have weighed on the relationship between the people and those that represent the power of state during the period following the "Moroccan Spring" when democratic rights were pushed back – they are starting a new chapter.

In the present situation, the image of authority portrayed by servants of the state is unfamiliar because it is light years away from the one that is traditionally associated with them, namely one of violence and oppression. The Moroccan Minister of the Interior has readily accepted that there have been isolated exceptions to this rule (for example, one civil servant slapped a citizen in the face) and declared that such transgressions are the result of stress and overwork.

Special fund to cushion the impact of the crisis

The government is also doing its best to cushion the impact of the measures it has introduced to fight the pandemic. To this end, it is using a recently set up special fund to manage the damage caused by the coronavirus pandemic. For example, it has agreed on a series of measures that seek to benefit companies and all economic activities affected by the virus.

It has also launched a package of social measures, first and foremost, loss of earnings compensation for people who are dependent on the social security system. In addition, emergency financial aid of between US$75 and $180 per family. 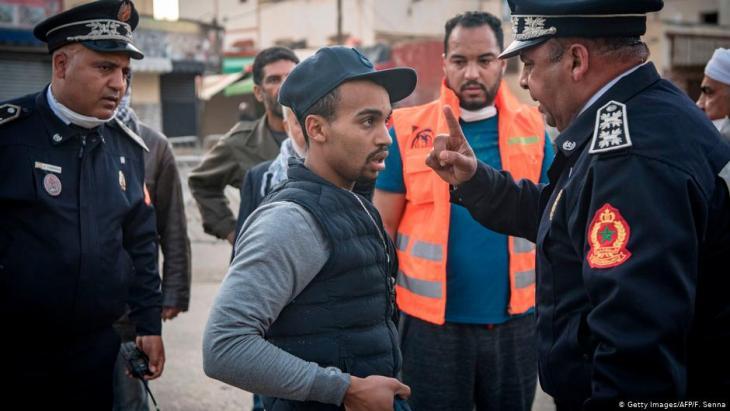 United in fighting the pandemic: in the present situation, the image of authority portrayed by servants of the state is unfamiliar because it is light years away from the one that is traditionally associated with them, namely one of violence and oppression

Regardless of how Morocco's fight against the coronavirus pandemic pans out, the state's early vigilance compared with its neighbours Spain, Italy and France is certainly laudable.

It is not an exaggeration to say that the state was realistic about its capabilities and raised the alarm early on. It made fateful, unprecedented decisions that have resulted in a very special moment of national solidarity.

Home
Print
Newsletter
More on this topic
Digitalisation and the coronavirus in Morocco: From care to control?Morocco launches fleet of drones to tackle virus from the skyCOVID-19 in North Africa: Corona proactivity in Tunisia, trivialisation in Egypt
Related Topics
Coronavirus, Democracy and civil society, Health, Mohammed VI of Morocco, Rule of law
All Topics

In a novel response to Libya’s ongoing civil war, photographers in the capital, Tripoli, are building a vast archive of photographs highlighting the beauty that can be found ... END_OF_DOCUMENT_TOKEN_TO_BE_REPLACED

The end of July saw the launch of the African Union’s "Sauti" digital publication, the first young feminist platform in Africa, which this year showcases stories by female youth ... END_OF_DOCUMENT_TOKEN_TO_BE_REPLACED

The outpouring of solidarity worldwide following the violent death of George Floyd should prompt us to step back and fundamentally question racist structures and privileges based ... END_OF_DOCUMENT_TOKEN_TO_BE_REPLACED

21 July marks the centenary of the birth of Mohammed Dib, one of the founding fathers of French-language Algerian literature. Born in 1920 in Tlemcen, Algeria's national writer ... END_OF_DOCUMENT_TOKEN_TO_BE_REPLACED

END_OF_DOCUMENT_TOKEN_TO_BE_REPLACED
Social media
and networks
Subscribe to our
newsletter