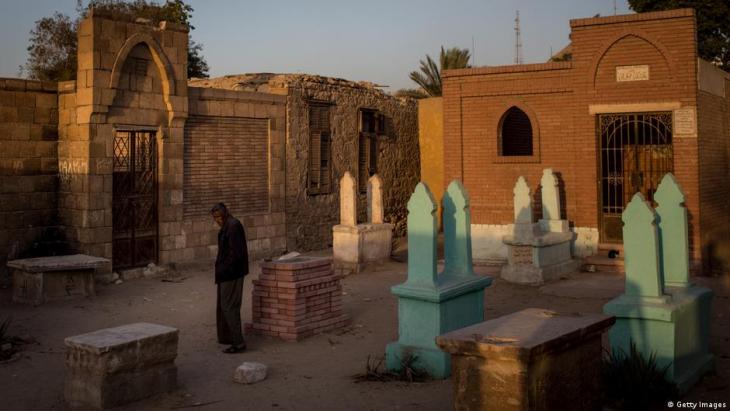 COVID-19 in the Middle East
Playing down pandemic death tolls

A new global database shows a significant gap in reported COVID-related deaths, suggesting the actual worldwide death toll is short by at least 1 million. That's due in part to false figures from autocratic regimes. Jennifer Holleis has the details

Since the start of the pandemic in early 2020, countries around the world have officially reported 4.27 million deaths from COVID-19. However, as widely suspected, these purported numbers are far from accurate.

The World Health Organization (WHO) has said the official global death toll is likely a "significant undercount," meaning that fewer than the actual number of total deaths directly or indirectly attributed to COVID have been recorded. The reasons are manifold, and depend for example on the political situation or the will to publish data at all.

"Many countries still lack functioning civil registration and vital statistics systems with the capacity to provide accurate, complete and timely data on births, deaths and causes of death," the organisation said in a report.

To shed more light on the real global death toll, two researchers have compiled the world's largest mortality database comparing reported COVID deaths with the weekly, monthly or quarterly data on deaths from all causes in 103 countries.

"Excess mortality, which is defined as the increase in all-cause mortality relative to the expected mortality, is widely considered as a more objective indicator of the COVID-19 death toll," wrote the authors of the study, Ariel Karlinsky of the Hebrew University of Jerusalem and Dmitry Kobak of the University of Tubingen, in southern Germany.

Our findings show significant excess mortality in many countries from all over the world, both in absolute numbers, per capita terms and increase from expected mortality.
Even if countries had not tested or reported COVID - it's easily detectable in excess mortality.

Their World Mortality Dataset, published at the beginning of August, estimates there have been at least a million extra deaths during the COVID-19 pandemic – and that's without the data from more than 100 other countries, which was not available.

The gap between the official mortality rate and the actual death toll has already been found to be wider in countries run by authoritarian regimes, when compared to the statistics reported by more democratic countries.

The new global dataset seems to confirm this as well: Austria, Belgium, Germany and France were found to have been relatively accurate in their reporting numbers, which translated to an undercount ratio of less than 1.

By contrast, the highest undercount ratio was found for non-democratic countries like Tajikistan (100), Nicaragua (51), Uzbekistan (31) and Belarus (14). In Egypt, for example, where that ratio was 13, some 6,600 deaths were officially recorded by November 2020, whereas the real mortality was calculated to be at 87,000. 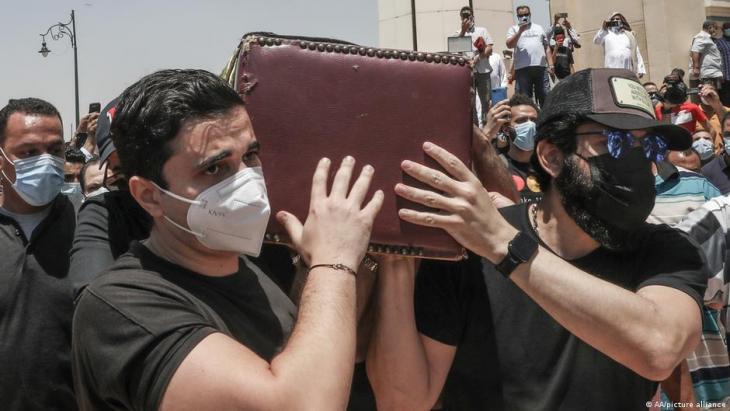 The gap between the official mortality rate and the actual death toll has already been found to be wider in countries run by authoritarian regimes, when compared to the statistics reported by more democratic countries. In Egypt, for example, where that ratio was 13, some 6,600 deaths were officially recorded by November 2020, whereas the real mortality was calculated to be at 87,000. Of course, some deaths, such as that of actor Samir Ghanem, have still attracted massive media attention

"In authoritarian regimes, transparency is generally not as important as in democratic ones, given the lack of accountability," said Maria Josua, a research fellow at the German Institute for Global and Area Studies in Hamburg.

"In other words, it is fair to assume that many statistics from authoritarian regimes have been embellished, regardless of whether they are about unemployment rates, mortality or excess death rates. Egypt is a particularly blatant example with an extremely high excess death rate and also an extreme cover-up."

Karlinsky said Egypt has a "pretty robust vital registration system in place," and said the high undercount ratio of 13 is likely a deliberate miscalculation, as well as an obvious power projection by the country's authoritarian leaders.

"Egypt's undercount of COVID cases and deaths has long been suspected by many observers including me," said Timothy Kaldas, a researcher with The Tahrir Institute for Middle East Policy. "Excess deaths between May and July of 2020 indicated the undercount was likely massive. It appears that the Egyptian government is not interested in a comprehensive count of cases, given that the official figures only reflect government-administered PCR tests, which are largely reserved for severe cases in government hospitals. Private PCR tests and other diagnostic methods are not included in the official count." 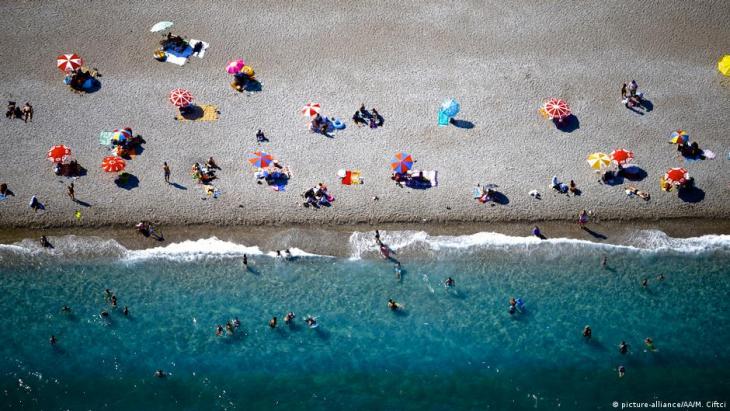 Loath to forfeit another tourist season: economic factors play a crucial role. There are signs that Turkey is engaged in data manipulation in the hope of downplaying the pandemic. The country was supposed to release its all-cause mortality monthly data for 2020 by the end of June 2021, but ended up postponing the publication for an unspecified time over unexplained "difficulties"

Economic factors play another crucial role: the International Monetary Fund had raised the forecast for Egypt's 2021 growth from 2% to 2.8%, based in part on "official figures that even the government acknowledges to be inaccurate," Kaldas pointed out. And, said Josua, the economic impact of more COVID deaths on the country's backbone – tourism – cannot be underestimated. "Another missed tourism season simply cannot be afforded," she said.

Fears that countries may "manipulate" data

Until Karlinsky and Kobak started collecting the data in late 2020, there was no international repository for a pandemic-related excess mortality rate that included more than 100 countries. Previously, a few databases had only compared figures from a handful of high-income countries in Europe.

As with every dataset, several aspects have to be taken into consideration when comparing the figures with previous years. Due to lockdowns, the number of fatal car accidents dropped to an all-time low in countries around the world. Deaths caused by influenza or other respiratory diseases fell due to social distancing and the fact that many more people were working from home.

The researchers also pointed out that 2020 was a leap year, which means that a direct comparison to another year is naturally slightly distorted, and added that the recording time frames differ from country to country, depending on when the pandemic began in each area.

And yet, the bottom line is that far more people have died of COVID-19 than the WHO's official global count. 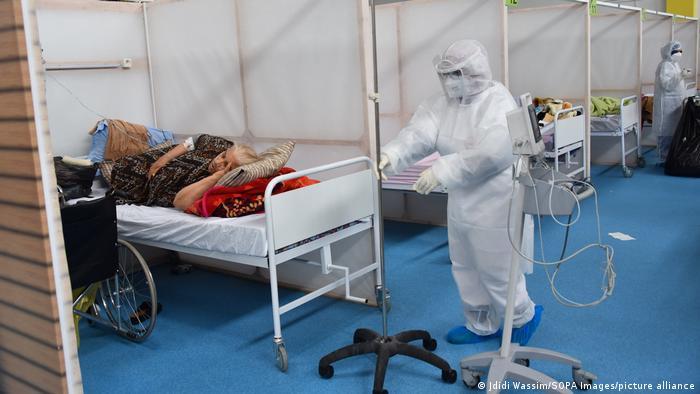 Infections on the rise: in late June, between 3,500 and 4,000 new infections were reported in Tunisia every day. Former Prime Minister Hichem Mechichi also contracted the virus in a country with little testing and where many hospitals are overwhelmed by the many COVID-19 patients. 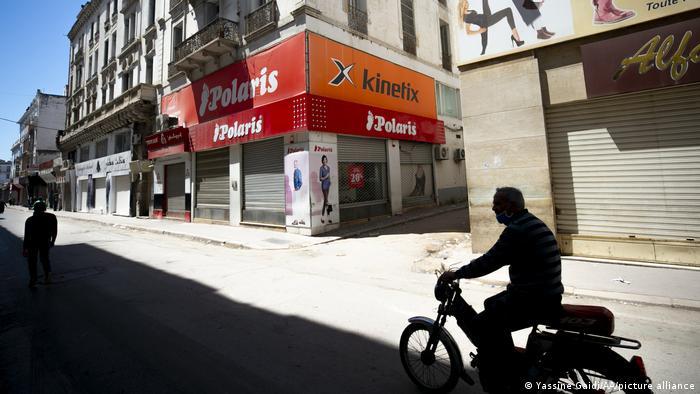 Curfews and lockdowns: A night-time curfew has been in place nationwide since October 2020. Depending on the incidence rate, the government has also imposed lockdowns for cities and regions, sealing them off from the outside world, like in the north-eastern city of Manouba (pictured here). Beja, Silyana, Zaghouan and Kairouan are reporting the highest incidence rates in the country. Lockdown in Kairouan: Kairouan is located about 150 kilometres south-west of the capital, Tunis. With well over 400 infections per 100,000 inhabitants, the city of about 120,000 inhabitants had one of the country's highest infection rates at the end of June. The square in front of the mosque is normally crowded and bustling with activity. But Kairouan is currently sealed off and looks more like a ghost town. 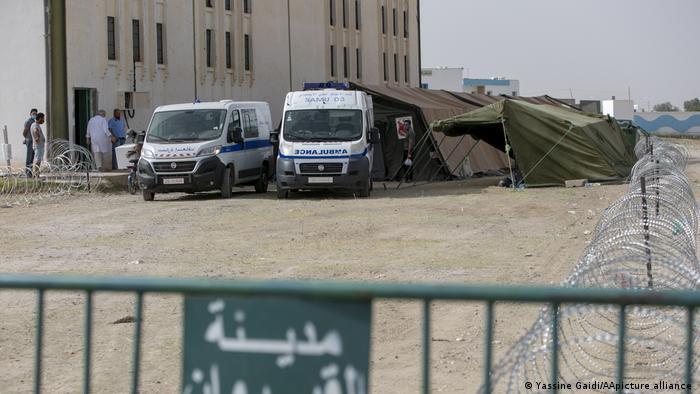 Makeshift COVID-19 wards: Kairouan has grappled with high infection levels for weeks. The hospitals in the city have been overwhelmed, and special COVID-19 wards were not readily available everywhere. In the meantime, such units have been set up to make sure coronavirus patients are kept far away from regular patients. Shortage of staff: Doctors and members of the already scarce nursing staff have also become infected with the virus. Some patients have to be supplied with oxygen until a hospital bed can be found for them in another city. Death rate up: At the end of June, 8 to 10 people died of COVID-19 every day in Kairouan. According to official figures, almost 15,000 people have died in Tunisia since the beginning of the pandemic. Delta variant spreads: Doctors and nurses are working round the clock. The Health Ministry, which is urging the population to comply with coronavirus measures, said that by the end of June, 18 people had contracted the more contagious COVID-19 delta variant. Slow vaccination campaign: The vaccination campaign in Tunisia is making slow progress. By the end of June, fewer than 1.8 million had been vaccinated in Tunisia, which has a population of approximately 11.5 million; only about 500,000 of them had received full vaccination protection, according to the Tunisian Health Ministry. It looks doubtful, however, that the country will manage to vaccinate half the population this year as planned.

"I have hope, and a contrasting fear at the same time," admitted Karlinsky. He hopes that countries will take the findings to heart and reaudit their COVID death tolls. Peru has already followed through and updated its death toll, which has more than doubled from 69,000 to 180,000.

"What I am afraid of is that countries that are already sort of authoritarian and try to downplay the extent of the pandemic might start to manipulate these types of data as well," he said.

Karlinsky fears Turkey has already taken steps in that direction. He said Turkey was supposed to release its all-cause mortality monthly data for 2020 by the end of June, but ended up postponing the publication for an unspecified time over unexplained "difficulties".

"I'm in contact with researchers in Turkey. There are some excess mortality estimates from Istanbul and other big cities. And they are probably very, very large," said Karlinsky.

Tourists have been returning to Tunisia, Egypt and Morocco. But, given the global uncertainty caused by the Ukraine war, will the comeback be enough to save a struggling sector, ... END_OF_DOCUMENT_TOKEN_TO_BE_REPLACED

In this essay, renowned Lebanese journalist and writer Hazem Saghieh asks whether the Arab Levant, which stretches from Iraq in the east to Egypt in the west, will remain an ... END_OF_DOCUMENT_TOKEN_TO_BE_REPLACED

By 2050, the Middle East and North Africa could be dealing with many more elderly people suffering from dementia. A lack of facilities, specialists and local knowledge means the ... END_OF_DOCUMENT_TOKEN_TO_BE_REPLACED

With his fist bump greeting for a man he previously called a pariah, US President Biden has paved the way for Saudi Crown Prince Mohammed bin Salman's return to the international ... END_OF_DOCUMENT_TOKEN_TO_BE_REPLACED
Author:
Jennifer Holleis
Date:
Mail:
Send via mail

END_OF_DOCUMENT_TOKEN_TO_BE_REPLACED
Social media
and networks
Subscribe to our
newsletter