The pandemic as an opportunity for "would-be hegemons"

The capital-strong monarchies on the Arabian Peninsula have more resources on hand to counter the spread of COVID-19 than are available elsewhere. On the one hand, the rich Gulf States have healthcare systems with higher capacities and also more experience. As an annual pilgrimage destination, Saudi Arabia has gone through an institutional learning process in disease control. On the other hand, national pandemic plans were already put in place in 2012 after the MERS virus emerged in Saudi Arabia, as a result of which the government initiated precautions against COVID-19 at a much earlier date than elsewhere, including expanded testing.

The Gulf States are moreover readily able to mitigate the crisis using government relief programmes and credit lines. And yet they are nonetheless inextricably bound up in today’s global trade flows: as an international air travel hub, a venue for events and investments, not to mention as a workplace for international migrant workers, without whom futuristic real estate projects such as the new Saudi city NEOM would not be feasible. 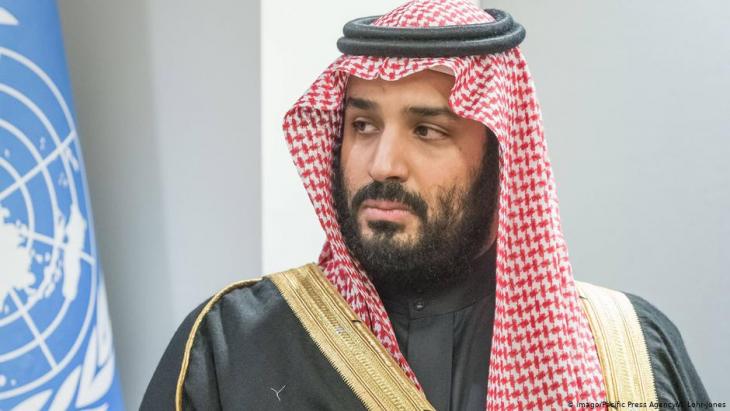 Questing for power: While Riyadh is taking advantage of the crisis to shore up its regional leadership ambitions, for example by vehemently rejecting any easing of sanctions against its arch-enemy Iran, the UAE, closely allied as it is with Saudi Arabia, sees an opportunity here to sharpen its own foreign policy profile and step out of the shadow of its big neighbour

While Riyadh is taking advantage of the crisis to shore up its regional leadership ambitions, for example by vehemently rejecting any easing of sanctions against its arch-enemy Iran, the UAE, closely allied as it is with Saudi Arabia, sees an opportunity here to sharpen its own foreign policy profile and step out of the shadow of its big neighbour. The Emirati Crown Prince has thus assured Syrian ruler Bashar al-Assad of his country's support, while at the same time delivering medical aid supplies to Iran, which has been heavily affected by the virus.

Repression and crisis management at the national level

The repertoire of measures undertaken by governments worldwide to slow the spread of the pandemic is very similar. Nevertheless, autocratic regimes are obviously interpreting the situation as an opportunity to further stabilise their own rule through repressive tactics.

The Crown Prince of Saudi Arabia has had critics from among his own ranks arrested (including his uncle and the last full brother of his father, Prince Ahmed, as well as former Crown Prince Mohammed bin Nayef). One of the first measures launched by the Saudi regime was to seal off the administrative district of Qatif in the Shia-dominated eastern province, which has long been considered a hotbed of unrest in the eyes of the rulers in Riyadh.

At the same time, the regime is also using the current crisis to distance itself from some of its past "foreign policy adventures". The Saudis thus recently declared a two-week ceasefire in Yemen. Although it is unclear what will happen after this period expires (provided the ceasefire is observed at all), Saudi Arabia has evidently long been in search of an exit strategy for the war, which has not only become a financial burden but has also caused a major loss of face among its own population (not to mention damaging its international reputation due to the humanitarian catastrophe in Yemen).

Egypt, with its 100 million inhabitants, has its back against the wall. A healthcare system that has been allowed to decay for decades is now coupled with weak statehood and a crisis-ridden economy that relies on support from the International Monetary Fund (IMF).

The government is trying its hand at crisis management, with President Sisi announcing a 75% wage hike for physicians and a national rescue package of EGP 100 billion (just under 6 billion euros), which is however aimed mainly at stabilising the financial markets and the tourism industry. The announcement of the package was flanked by motivational slogans and claims that the nightmare would be over in three weeks (according to Health Minister Hala Zayed on 30 March).

The military is staging itself as the people's saviour in their hour of need, producing protective masks and clothing and carrying out broad-based disinfection measures in public with extensive media coverage. Objections are not tolerated. Reports alleged as false are sanctioned, and unwelcome foreign journalists are being expelled from the country. The long-term consequences will be dramatic, shaking the Egyptian economy to its very foundations. The attacks of 11 September and other local terrorist acts have resulted in temporary declines in the vital tourism industry.

By comparison, Egypt was left relatively unscathed by the global financial crisis of 2008, due above all to its lower reliance on international financial markets. This time, though, the country's tourism sector has come to a complete standstill. And the remittances from guest workers in the Gulf States have declined sharply. Even revenues from transit through the Suez Canal (2019: 5.8 billion US dollars), a key source of income for the regime, depend on the stability of world trade.

The pandemic and the safeguarding of power

COVID-19 is posing a challenge to politics and society worldwide. But at the same time, fighting the pandemic seems to be offering a golden opportunity for certain Middle Eastern autocrats, particularly those whose rule has not yet been sufficiently consolidated (Egypt) or who are facing changes in their nation's power structure (Saudi Arabia). What's more, it also presents windows of opportunity for new players to underscore their ambitions beyond national borders (UAE).

Finally, the region's autocrats will be judged by whether they keep the political, economic and social promises they have made to their people. After all, when it comes to treating shaky regimes, cosmetic legitimacy measures and broad-based repression are drugs with an extremely short half-life.

Thomas Demmelhuber is Professor of Politics and Society of the Middle East at Friedrich-Alexander-Universität (FAU) in Erlangen-Nuremberg.

Tobias Zumbraegel is a researcher and project coordinator at the Centre for Applied Research in Partnership with the Orient (CARPO) in Bonn.

Over the years, the relationship between arch-rivals India and Pakistan has been shaped by conflict and confrontation. For some time now, however, both countries have been singing ... END_OF_DOCUMENT_TOKEN_TO_BE_REPLACED

China has long portrayed itself as a strong supporter of the Palestinian cause. It has also claimed that in sharp contrast to the stance of the USA, its position is based on ... END_OF_DOCUMENT_TOKEN_TO_BE_REPLACED

German Middle East analyst Guido Steinberg and television journalist Ulrich Tilgner have both published new books on the conflicts in the Middle East. Their analyses and their ... END_OF_DOCUMENT_TOKEN_TO_BE_REPLACED

On 27 March, Iran and China signed a 25-year accord intended to foster "strategic co-operation". Despite ongoing uncertainty over the deal's actual scope, content and chances of ... END_OF_DOCUMENT_TOKEN_TO_BE_REPLACED

END_OF_DOCUMENT_TOKEN_TO_BE_REPLACED
Social media
and networks
Subscribe to our
newsletter