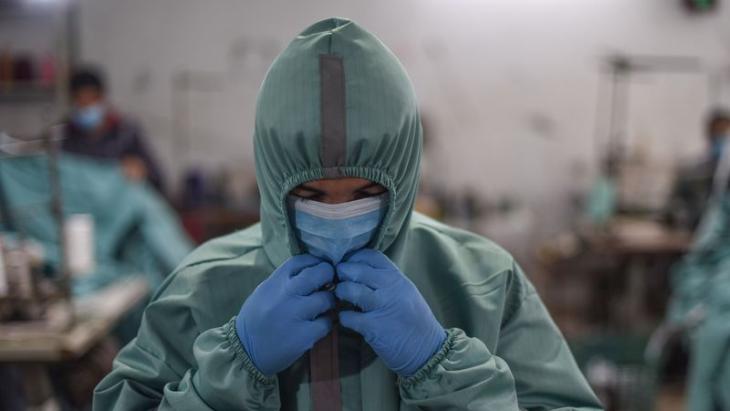 COVID-19 pandemic
Besieged Gaza on the verge of coronavirus catastrophe

Coronavirus testing re-started in the Gaza Strip after 480 testing kits purchased by the World Health Organization (WHO) reportedly arrived in the enclave on Sunday night. The Palestinian health ministry had warned of a critical health situation in Gaza after the central laboratory ran out of supplies to process COVID19 tests last week.

Ashraf al-Qudra, spokesman for the health ministry, pointed out last Thursday that the absence of such supplies would cause a large backlog of pending tests, and delay the procedures for ending the isolation of hundreds of quarantined people as a result. In a news briefing on Saturday, Qudra appealed to the international community and relief organisations to help Gaza face the pandemic by procuring vital medical and lab necessities.

As of 14 April, there were 13 confirmed cases of COVID19 in the coastal strip, nine of them having recovered and four, in a stable condition, remaining in isolation at Rafah crossing field hospital, on the border with Egypt.

“Even before the disease epidemic, Gaza capacity was under heavy strain because of more than a decade of severe restrictions on movement of goods and people”, Suhair Zakkout, the International Committee of the Red Cross (ICRC) spokeswoman in Gaza, stressed, “the already shaken health system will be incapable of handling a coronavirus outbreak”.

Officials and aid workers have voiced serious concern that a shortage of essential equipment and medical supplies could trigger rapid contagion in the besieged territory, 365 square kilometres in area and home to a population of two million people.

Currently, the Strip has some 2,500 available beds;  its 13 hospitals have only 110 intensive care unit (ICU) places, of which the majority are occupied. There is a 50% shortage of medication and medical facilities, and just 93 ventilators are available.

Public primary healthcare facilities are operating at limited capacity, providing key services only, in an attempt to further curb the spread of the virus. There is an acute scarcity of essential drugs, medical disposables, equipment necessary for medical examination, and specialised health professionals. Based on ICRC estimates, Gaza would currently only be able to deal with 100-150 coronavirus cases.

Social distancing is hardly feasible in the small enclave, one of the most densely populated places on earth, where the majority of the inhabitants live in tightly-packed refugee camps, making essential hygiene and infection control a huge challenge.

Fifty-five years after Israel began occupying Palestinian lands, it is more difficult than ever to imagine a way out. The seeds of the two-state solution that were planted by ... END_OF_DOCUMENT_TOKEN_TO_BE_REPLACED

Yazan Khalili is spokesman for The Question of Funding, a collective of artists taking part in the leading German contemporary art festival Documenta 15. Here, he responds to ... END_OF_DOCUMENT_TOKEN_TO_BE_REPLACED

When times are tough, the exchange of ideas and perspectives becomes especially important. It takes dialogue. And at Deutsche Welle, we need distributors and cooperative partners ... END_OF_DOCUMENT_TOKEN_TO_BE_REPLACED

Every week, Jewish, Christian and Muslim youths meet to sing together. And they do so in the middle of a city where Israelis and Palestinians are often at loggerheads. Anja Koch ... END_OF_DOCUMENT_TOKEN_TO_BE_REPLACED

A law has been passed by the Iraqi parliament that criminalises any contact with Israel. In the midst of heated debates on the subject, one crucial aspect has been forgotten: the ... END_OF_DOCUMENT_TOKEN_TO_BE_REPLACED

Analyst Iyad El-Baghdadi examines the ongoing tensions between the United States and the two Gulf states – Saudi Arabia and the UAE – and their geopolitical implications in ... END_OF_DOCUMENT_TOKEN_TO_BE_REPLACED
Author:
Alessandra Bajec
Date:
Mail:
Send via mail

END_OF_DOCUMENT_TOKEN_TO_BE_REPLACED
Social media
and networks
Subscribe to our
newsletter