Only one COVID-19 treatment centre

"The situation in Aden is very complicated," said Mansour. "But even in Sanaa, the situation is anything but easy." She declined to say more about the political situation in the country. 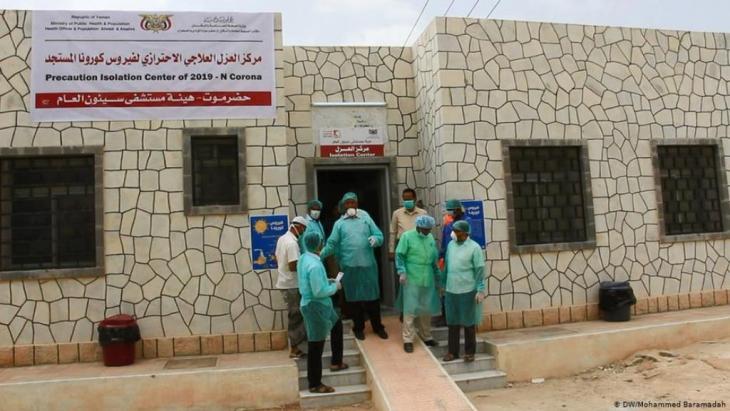 The United Nations and donor countries urgently need to do more to combat the COVID-19 pandemic in Yemen. Alarmingly high mortality rates at the Covid-19 treatment centre in Aden point to a major disaster taking place in the south of the country, warns international aid organisation Doctors without Borders

But she said she is especially concerned by the coronavirus news coming from Aden, where many dozens of people are said to be dying every day. Images that have made the rounds show dead bodies lying in the streets, and there are reports of many people dying at home, especially in poorer districts. This has been confirmed by Doctors Without Borders (MSF), which runs the only centre for treating COVID-19 patients in Aden.

"What we are seeing in our treatment centre is just the tip of the iceberg, in terms of the number of people infected and dying in the city," said Caroline Seguin, who heads MSF projects in Yemen, in a statement in mid-May. "People are coming to us too late to save, and we know that many more people are not coming at all: they are just dying at home. It is a heart-breaking situation."

Government statistics on funerals also make it clear that many people must be dying at home: eighty people died in Aden per day in mid-May, compared with just 10 a day before the coronavirus outbreak. Doctors Without Borders has also reported a high number of infections among carers and helpers.

Without a way to test the population for the disease, the true number of people infected or killed will remain unclear. Medical resources are also scant: there are just 500 ventilators and 700 intensive care beds available in a country with a population of 29 million. In many districts, there isn't even a doctor.

16 million could be infected with COVID-19

The cholera epidemic has so far infected 2.3 million Yemenis, with some 4,000 people dying of the disease. The UN fears that at least 40,000 will die of COVID-19, while more than half the population could be infected by the virus. The UN's refugee agency, UNHCR, believes many Yemenis could also develop severe COVID-19 symptoms due to malnourishment, according to UNHCR's Jean-Nicolas Beuze. "It's a tragic situation, one that is being ignored by the rest of the world," he told Indian broadcaster Wion in a recent interview.

Mansour also feels the catastrophic situation in the country is getting barely any attention. "Perhaps the world is getting tired of always hearing the same terrible news from my country," she said, adding that Yemen has been pushed aside even further due to the global preoccupation with the pandemic.

The fact that the world has turned its attention away from Yemen has had disastrous consequences. Several local aid organisations have been forced to close their doors over a lack of international financial assistance, and even the UNHCR has less money at its disposal – not even 30% of the aid money it needs for Yemen, according to Beuze.

This is particularly devastating for the more than 3.6 million people internally displaced by the war, who can no longer be adequately supported. Some hope is being placed in an online UN donors' conference to be held on 2 June in the Saudi capital, Riyadh. The conference is aiming to come up with $2.41 billion (€2.2 billion) to cover essential activities in the second half of the year, including $180 million to fight the coronavirus pandemic.

Mansour said she is still among the privileged in Yemen. She lives with her mother and two aunts in an apartment in central Sanaa, and can pay for a large share of her family's needs with her jobs. "We follow the health recommendations and have masks and gloves. I leave the house only to do what has to be done, but I can also work from home," she said. But, she said, this isn't possible for many Yemenis.

Almost 80 percent are dependent on humanitarian aid. "Most of them are day labourers; they can't afford to stay at home. If they don't work, they starve," she said. "I am afraid that I might soon have to step over bodies in the streets of Sanaa, too."

The Middle East is plagued by electronic armies working at the behest of one regime or another. Long used by those in power as a weapon in the fight against activists and ... END_OF_DOCUMENT_TOKEN_TO_BE_REPLACED

On Friday, Iranians head to the polls to elect a new president. What's at stake in this presidential election? Sanam Shantyaei explains. END_OF_DOCUMENT_TOKEN_TO_BE_REPLACED

For centuries, the great classical Persian author Hafez has inspired German writers. Translations, adaptions and homages have been created in his wake, and the process continues ... END_OF_DOCUMENT_TOKEN_TO_BE_REPLACED

In the run up to Iran’s presidential election, Supreme Leader Ayatollah Ali Khamenei has sought to entrench his power. Alex Vatanka asks whether a sharp slump in voter turnout ... END_OF_DOCUMENT_TOKEN_TO_BE_REPLACED

Turkey's parliamentary and presidential elections are scheduled for June 2023. But they are already casting a shadow. While the opposition is calling for early elections, ... END_OF_DOCUMENT_TOKEN_TO_BE_REPLACED
Author:
Diana Hodali
Date:
Mail:
Send via mail

END_OF_DOCUMENT_TOKEN_TO_BE_REPLACED
Social media
and networks
Subscribe to our
newsletter