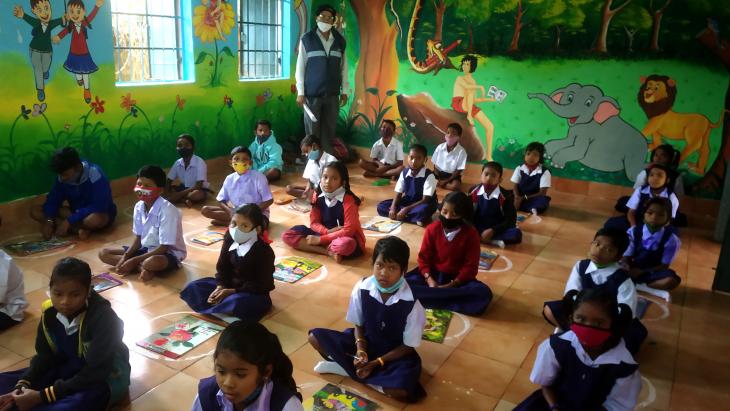 COVID-19 pandemic in India
Enabling the rights of the child

COVID-19 has many negative impacts on children, particularly in terms of education and healthcare. Development projects in the Indian state of Assam show how actors can successfully support disadvantaged children in times of crisis. By Enakshi Dutta, Cynthia Dittmar and Franziska Muller

COVID-19 has hit children hard everywhere. Among other things, lockdowns and school closures have caused painful disruptions. Many minors worried about their parents or grandparents, or even experienced someone close to them might die. Around the world, children’s rights have been massively curtailed.

Domestic and sexual abuse, exploitation, child labour and child marriage have all increased dramatically during the COVID-19 pandemic. At the same time, minors in crisis often could not turn to outsiders for help, for example because many child-protection services were not operating. Schools, where attentive teachers could have offered support, were closed.

As a result, anxiety disorders, psychological stress, depression and suicide increased significantly among children and adolescents. At the same time, children’s physical resilience has declined because parents became too poor to feed them adequately. According to the UN’s child welfare organisation, in 2020, an additional 132 million people went hungry worldwide, 44 million of them children (UNICEF 2020a).

UNICEF has projected that an additional 140 million children now live below the poverty line in the global south due to the negative economic impact of COVID-19. Another 150 million are suffering from multidimensional poverty. Sub-Saharan Africa and South Asia are affected in particular. Masses of children lack access to education, health care, shelter, food, sanitary facilities or clean water. 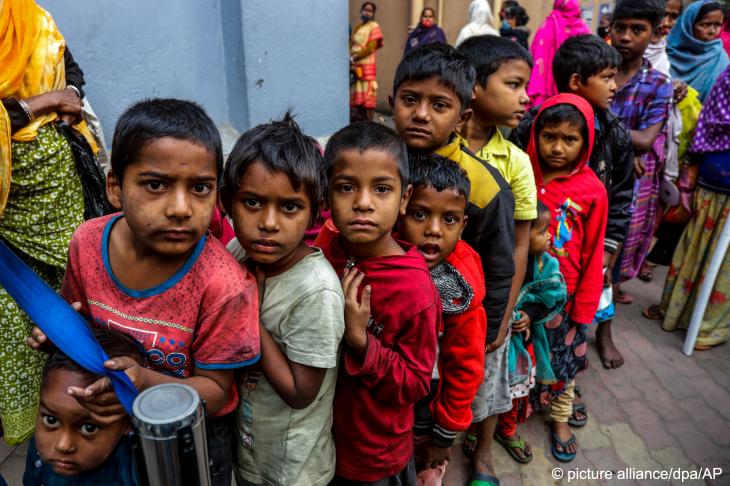 COVID-19 makes an already bad situation much worse: according to the UN’s child welfare organisation, an additional 132 million people went hungry worldwide in 2020, 44 million of them children. UNICEF has projected an additional 140 million children to be living below the poverty line in the global south now due to the negative economic impact of COVID-19. Another 150 million are suffering from multidimensional poverty, with sub-Saharan Africa and South Asia particularly affected. Masses of children lack access to education, health care, shelter, food, sanitary facilities or clean water

The most severe impact of the crisis has been on children’s education, however. Due to school closure, almost all children of the global south received no instruction for over a year. Many did not return when schools opened again. The others are still struggling with a learning deficit of many months.

UNICEF reports that 463 million children could either not participate in online classes or did not receive any support at home. The reasons were their domestic situations and gaps in rural infrastructure. Children in low-income countries missed about twice as much school as children did in high-income countries. Girls suffered in particular. On average, they have less access to digital technology than boys and they have to help out more at home (UNICEF 2020b). Both is true in India.

Facilitating education for children and young people in these difficult circumstances is the mission of the child welfare organisation Childaid Network. This civil-society organisation advocates for children and adolescents in remote regions of India’s northeast, Nepal, Bangladesh and Myanmar. The focus is on children’s rights, basic education, vocational training and support for small enterprises. Since the pandemic set in, Childaid Network has also devoted additional attention to healthcare.

In the Indian state of Assam, the Institute of Development Action (IDeA) and Childaid Network Germany have started an initiative for children’s rights: EnRiCh (Enabling Rights of the Child). It was initially launched in 45 villages. The current aspiration is to reach at least 80,000 children within two years. 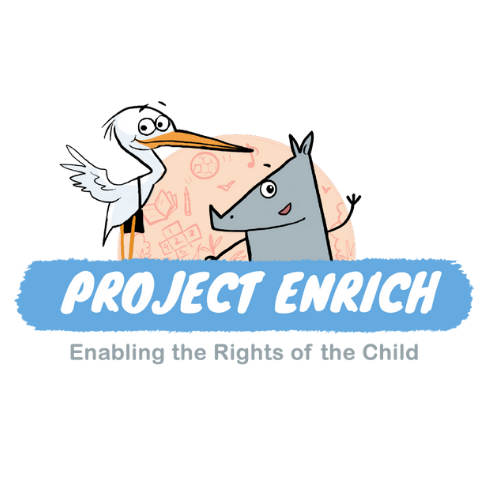 COVID-19 village committees: made up of representatives of community leaders, young people and health workers, these local bodies kept working during lockdown via WhatsApp groups and online conferencing. The EnRiCh project team equipped every committee with medical supplies and informational brochures in order to slow the spread of the virus. Over 7,000 children received workbooks and writing materials so they could continue to learn. Tutoring was offered outdoors to small groups of pupils. Now the goal is to further strengthen governmental healthcare so it will be able to respond more efficiently to future crises with a stronger focus on children

On the one hand, EnRiCh directly supports local civil-society organisations. For example, it helps them during the process of building their organisations. It also supports their cooperation with local authorities.

On the other hand, the initiative networks various stakeholders, including parents, committees at the village level, local administrative bodies, school administrations and children’s clubs.

In order to make villages more child-friendly, EnRiCh relies on campaigns, workshops and specially appointed child-rights promoters at the community level. A network for child rights throughout all of Assam has started to grow.

Whereas Indian children typically grow up in hierarchical, authoritarian conditions, EnRiCh gives them space to express themselves and realise their potential. They meet weekly in specially formed "Rhino Clubs". The clubs are named after the one-horned rhino, which is the state animal of Assam. Kids learn together, play sports, engage in creative activities and make use of libraries.

Fostering a sense of community

They experience a sense of community and make contacts in the village and its surroundings. They also get information on children’s rights, health, the environment and nutrition. They are actually important multipliers in regard to how to behave in the pandemic. For this kind of work, EnRiCh provides a variety of materials in local languages – including handbooks, comics, posters or scripts for staging dramas.

As the second wave of COVID-19 caused high rates of infection and death in northeast India in the months April to June of 2021, IDeA and its partner organisations formed a total of 86 "COVID-19 village committees". They are made up of representatives of community leaders, young people and health workers. They kept working during lockdown. WhatsApp groups and online conferencing had been established in time.

The project team equipped every committee with medical supplies and informational brochures in order to slow the spread of the virus. Over 7,000 children received workbooks and writing materials so that they could continue to learn. Tutoring was offered outdoors to small groups of pupils. Now the goal is to further strengthen governmental healthcare so it will be able to respond more efficiently to future crises with a stronger focus on children.

Decisive action on the part of the state is not enough. Strong local communities and a vibrant civil society are central to overcoming pandemic problems. Paying particular attention to children’s rights is important in order to shield them from the worst impacts of necessary pandemic safeguards.

Enakshi Dutta is practitioner on child rights and capacity development of civil-society organisations. She is director of the Assam-based Institute of Development Action.

Cynthia Dittmar is project coordinator at Childaid Network in Germany. She visits the project regions regularly.

Franziska Müller is a student of peace and conflict research. She is working for Childaid Network as a student assistant.

India is generally considered to be the world’s largest democracy. As civic freedoms are being eroded, international experts now consider it seriously under threat. By Mira Mandal END_OF_DOCUMENT_TOKEN_TO_BE_REPLACED

In 1971, Bangladesh seceded from Pakistan after a bloody civil war to become independent. But the events of that time are still largely taboo today. A reappraisal of this central ... END_OF_DOCUMENT_TOKEN_TO_BE_REPLACED

Many marriages to British Asian men are accompanied by false promises of improved finances. Later when the men abandon their wives to return to the UK, some brides' families find ... END_OF_DOCUMENT_TOKEN_TO_BE_REPLACED

Global heating is driving domestic migration in Bangladesh, which sits just above sea level. With a population of 160 million, it is the most densely populated nation in the world ... END_OF_DOCUMENT_TOKEN_TO_BE_REPLACED

As Qatar prepares to host the 2022 FIFA World Cup, the country has come under fire for its treatment of migrant workers, with some nations calling for a boycott of the contest. ... END_OF_DOCUMENT_TOKEN_TO_BE_REPLACED

END_OF_DOCUMENT_TOKEN_TO_BE_REPLACED
Social media
and networks
Subscribe to our
newsletter