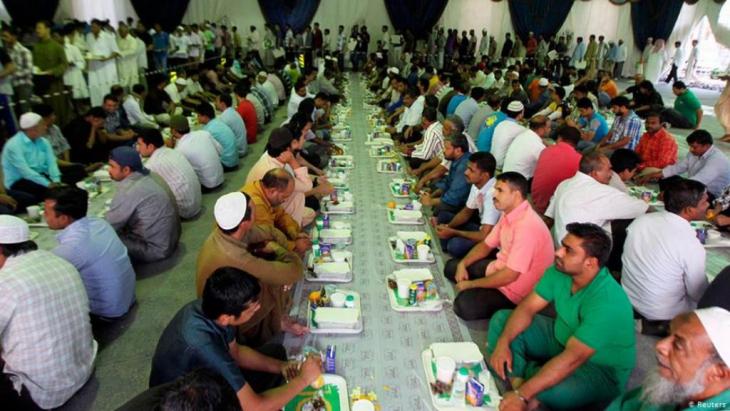 Ramadan begins this week even as the coronavirus pandemic up-ends life around the world. The crisis is forcing Muslims to re-think traditions and find new approaches to one of Islam's most important religious rituals. By Siham Ouchtou and Kersten Knipp

A couple of days ago, Abdul Latif al-Sheikh, Saudi Arabia's minister for religious affairs, announced that all Muslims in his country may only pray at home during Ramadan, which begins on 23-24 April, depending on sighting of the moon. They are forbidden to gather or pray together in the mosques of the country during the month of fasting.

With this, Al-Sheikh continues to rely on the strict measures to contain coronavirus that the country, which traditionally sees itself as the "servant" or "guardian of the holy places of Islam", adopted weeks ago: collective prayers in the mosques there have been banned indefinitely since 19 March. As early as the beginning of March Saudi Arabia had already stopped issuing visas for the umrah, the so-called "small pilgrimage", which is possible all year round.

The kingdom banned all pilgrimages to the shrines of Mecca and Medina on principle, closing off the mosques and precincts there completely. Muslims who intended to participate in this year's "great pilgrimage", the Hajj, were called upon to put their travel plans on hold for the time being. In fact, this too is probably tantamount to a cancellation.

Egypt followed suit in early April, banning all public religious gatherings during Ramadan. The Grand Imam of the Al-Azhar University, Ahmed al-Tayeb, had already suspended Friday and other community prayers in the famous mosque belonging to the university in Cairo in March. He issued a fatwa, a religious legal opinion, that specifically referenced the corona crisis.

But such restrictions have not gone down well with everybody. Last month, for example, congregants at Cairo's Sayyida Zainab mosque clashed with other citizens who accused them of spreading the virus by not maintaining enough distance during communal prayers, forcing authorities to close the important place of worship.

Indeed, there were even religiously charged "demonstrations" involving many people "against" the coronavirus across the country initially, which were however soon put down by the authorities. 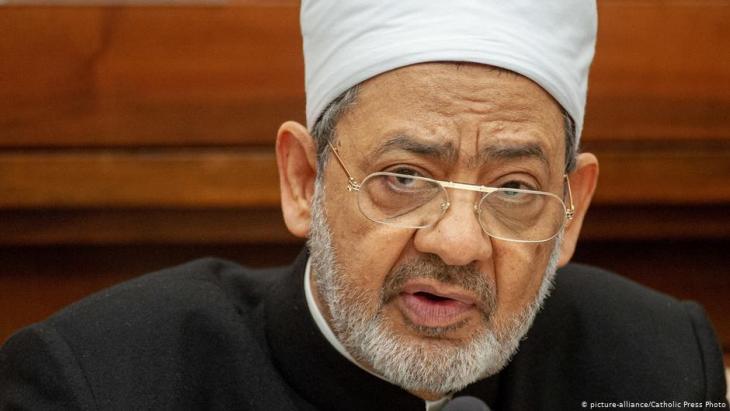 Considers the suspension of fasting to be legitimate: Ahmed al-Tayeb, the Grand Imam of Al-Azhar had already called on the Egyptians to strictly observe the protective measures against the coronavirus at the end of March. Ignoring the instructions of the authorities was tantamount to committing a sin, he said

The question of whether to fast has also opened up theological debate. Traditionally, exemptions from the obligation to avoid food and drink from sunrise to sunset have only applied to groups such as those who are sick or pregnant, travellers or the very elderly or infirm.

Doctors in various countries have argued against fasting because it dries out the throat, increasing the risk of infection. Instead, they say believers should increase their donations to the poor, recommending Muslims order food parcels online to be sent to those in need.

Are you spending #Ramadan this year on lockdown due to the #coronavirus pandemic? Here’s a list of things you can do to make the most out of the holy month:#COVID_19https://t.co/NEzF92SU8r

But researchers at Cairo's Al-Azhar University, which specialises in religious law, have maintained that fasting is mandatory until any harmful effects in connection with the virus are medically proven.

Moroccan Islamic scholar Abdelwahab al-Rafiqi believes that a diagnosis of underlying health conditions should exempt Muslims from the obligation. "Since sick people cannot adequately fulfil their religious duties, they are exempt from the obligation to fast, just like everyone else who fears illness," al-Rifiqi said.

The Moroccan theologian regards the individual case diagnosis as crucial: "If one has to assume an increased risk of illness through fasting on the basis of a medical examination, then it is also permissible to suspend it." Staying fed and hydrated could even be seen as a duty because the fight against the pandemic is the most important thing for Muslims – and the world – to focus on, he said. "This has priority over everything else."

Al-Rafiqi said that this year the month of fasting will have to do without the otherwise so important community rituals and will have to be limited to religious rites within the family circle. He also sees advantages in this: "Even if this means the loss of our wonderful rituals, it seems to me to be a special and quite useful experience."

"We turn our living rooms into mosques"

Muslim associations in Europe are arguing in similar fashion. Aiman Mazyek, the chairman of the Central Council of Muslims in Germany, believes that the current situation opens up the possibility for Muslims to become more aware of the holy month of Ramadan than ever before.

We’re excited to launch #MyOpenIftar - our solution to keeping the #Ramadan spirit alive this year!

Stay connected, unite and share your Iftar experiences with thousands of others ... #StayHomeStaySafe

It is not the renunciation of food and drink as such that plays the main role, but its deeper spiritual meaning: "Fasting should point the way to the spiritual treasure of Ramadan, the holy month in which the Koran was revealed, the month of mercy, of forgiveness, the month of prayer, of reading the Koran, of intimate conversation with God," wrote Aiman Mazyek, chairman of the Central Council of Muslims in Germany, on the body's website. Of course, Muslims prefer to pray together at the mosque, wrote Mazyek. "But in coronavirus times, we turn our living rooms into mosques within our families after we have broken the fast together with them."

This year's Ramadan has been discussed for weeks in the social media of Arab and other Islamic countries. Many contributing to the ongoing discussions have taken a pragmatic stance. Should the religious rites be banned during Ramadan, this tweet asks. No, answers one user, but the believers should keep their distance from each other during prayer. This was already done during an epidemic in the early days of Islam, the user says.

As the discussion of proper observance moves online, so will iftar, the daily breaking of the fast, through video and social media platforms. In the UK, for example, the Ramadan Tent Project will be hosting communal iftars via the video-conferencing platform Zoom and livestreaming them on Facebook "for those feeling isolated during Ramadan."

It is important that people can share a sense of belonging, Omar Salha, founder and CEO of the Ramadan Tent Project, told The National newspaper. "Our virtual iftars will provide a platform for people to safely unite, share their experiences and achieve a sense of belonging, at a time when it's needed the most."

Algerian scholar Said Djabelkhir rejects the charge of "offending Islam". In interview with Ismail Assam, he maintains that he has been wilfully misconstrued. At the same time, he ... END_OF_DOCUMENT_TOKEN_TO_BE_REPLACED

Saturday's historically low election turnout was a reflection of Algerians' ongoing frustration with the political status quo. Faced with mounting state repression, however, the ... END_OF_DOCUMENT_TOKEN_TO_BE_REPLACED

Morocco and the European Union are at cross purposes when it comes to the Western Sahara. And, as Germany does not support Moroccan claims to the territory, a major conflict has ... END_OF_DOCUMENT_TOKEN_TO_BE_REPLACED

Recep Tayyip Erdogan, disappointed by the European Union’s reluctance to integrate Turkey into its ranks, has re-directed his country’s diplomacy toward the Maghreb and Africa to ... END_OF_DOCUMENT_TOKEN_TO_BE_REPLACED

Using a graphic novel to address a contentious issue like the Algerian war of independence may seem an odd choice, but new release "Algeriennes", translated into English by Ivanka ... END_OF_DOCUMENT_TOKEN_TO_BE_REPLACED
Author:
Siham Ouchtou & Kersten Knipp
Date:
Mail:
Send via mail

END_OF_DOCUMENT_TOKEN_TO_BE_REPLACED
Social media
and networks
Subscribe to our
newsletter