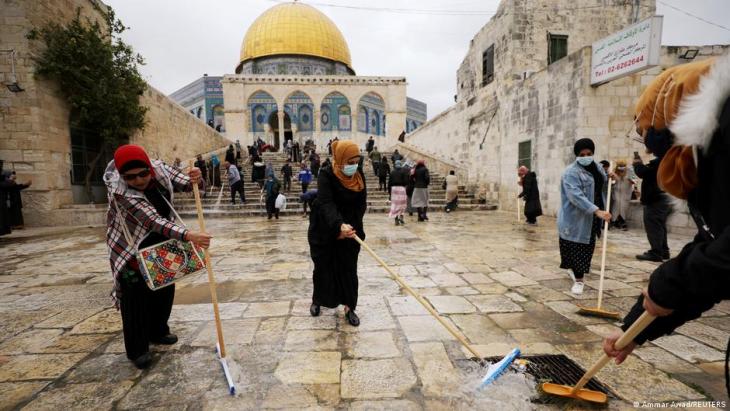 Surging coronavirus cases in many parts of the world have overshadowed the start of this year's Muslim holy month of Ramadan, with festivities once again curtailed by contagion fears.

Europe, the worst-hit continent, passed the threshold of one million coronavirus deaths, while South Asian countries battle a spiralling outbreak of the disease that has crippled the global economy.

Vaccination drives are giving hope to people fed up with restrictions that are well into a second year, and India – which is experiencing a record surge in cases – was given a boost as it authorised Russia's Sputnik V COVID-19 drug.

The total number of virus deaths is approaching 3 million, according to an AFP tally of official data, as the World Health Organization warned infections are rising exponentially despite efforts aimed at stopping them.

From Indonesia to Egypt, many Muslims around the world started Ramadan after religious leaders confirmed the month of fasting would begin on Tuesday, though restrictions on worshippers varied from country to country.

#COVID19 is still a real & present threat in our Region. This #Ramadan, it is more important than ever to remain vigilant & make compromises for the sake of our health, as well as the health of our loved ones.

Jakarta's newly renovated Istiqlal Mosque – Southeast Asia's largest – welcomed congregants for the first time on Monday night after more than a year of closure because of the pandemic.

Mohamad Fathi, a resident of the Indonesian capital, told journalists this year's Ramadan was happier than in 2020, when people were banned from taking part in taraweeh (evening) prayers.

The government of the world's most populous Muslim-majority nation has imposed limits, with mosques only able to host congregants at a maximum of 50 percent capacity. Worshippers are required to wear masks and bring their own prayer mats.

Several regions in Indonesia have banned gathering for fast-breaking and religious leaders have encouraged people to pray at home in certain zones where virus cases are spiking.

"This is like happiness in the middle of restrictions," Fathi added. "This year's Ramadan is very meaningful for me after last year we did not feel the joy of Ramadan at all."

Saudi Arabia, home to Islam's holiest shrines, announced that the holy fasting month was to start on Tuesday, though authorities said only people immunised against Covid-19 will be allowed to perform the year-round umrah pilgrimage from the start of Ramadan.

In Egypt, restrictions were much less stringent than last year as people took to the streets to mark the start of the fasting month.

Pakistanis will only begin fasting Wednesday after rival moon-sighting committees agreed to a nationally applied start of what is called "Ramazan" in the country. With the country in the grip of a third wave of the coronavirus – the deadliest so far – the government urged mosques to only allow prayers in open courtyards and to strictly enforce social distancing.

In neighbouring India – home to 1.3 billion people – health officials have been battling a huge surge in cases in recent weeks that has prompted night curfews and a clampdown on movement and activities. The country on Monday reported more than 161,000 new cases – the seventh-consecutive day that more than 100,000 infections have been recorded. 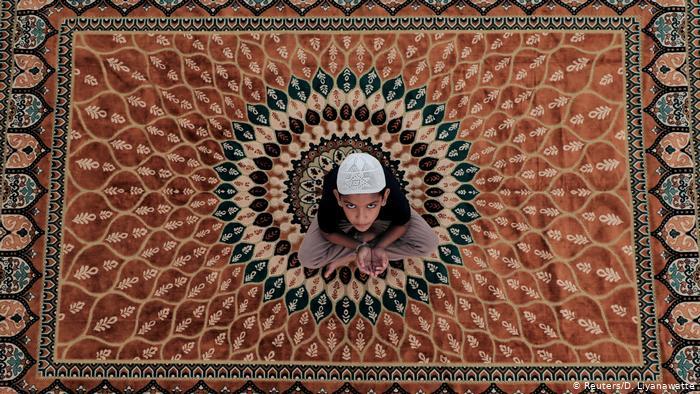 Gazing at the heavens: it is possible to pray alone – even if the mosques are otherwise well attended during Ramadan. But a carpet on the roof of a house in the metropolis of Colombo, Sri Lanka makes a passable alternative. With his hands together and his gaze directed towards the sky, this boy awaits the end of the day's fast 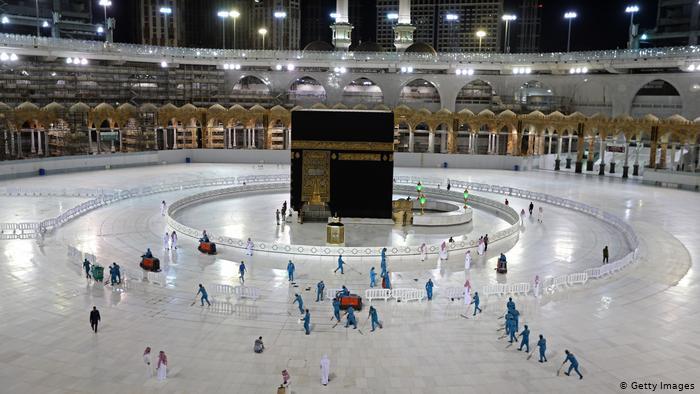 As clean as a new pin: it doesn't bear imagining what would happen if the usual crowds of people were to throng around the Kaaba in Mecca. A few believers nevertheless came to the Great Mosque on the first day of Ramadan. But the vast majority of the people in this picture are cleaners, whose work is particularly important now 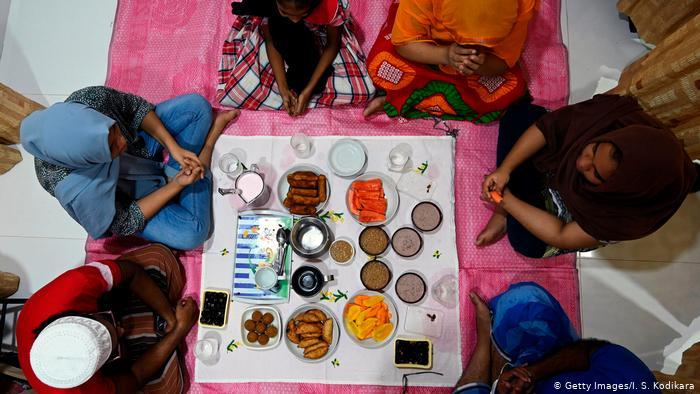 Breaking the fast despite coronavirus: according to Central European criteria, this family's get-together in Malwana, Sri Lanka would not be in the spirit of the fight against COVID-19. What is important here is the ritual breaking of the fast – iftar – during Ramadan, not social distancing. There is food in abundance, concluding prayers are said – and then the family shares what they have brought with them Praying at a safe distance: in Israel, it is said, the rules for containing the coronavirus pandemic are being strictly adhered to. The Palestinian men who have gathered here for prayer in a car park on Jaffa beach are no exception. The lines of the parking spaces help to keep the carpets at the required distance from the person next door Prayers with a mask and the Internet: it is a great help to Imam Bambang Suprianto in the Indonesian capital Jakarta that this city would hardly function without mobile phones and the Internet anyway. So he can read from the Koran and say prayers live on the Internet – from the Sunda Kelapa Mosque via social media. Suprianto also serves as a role model, reciting the words with mouth and nose protection Ramadan writ large: not that the Muslims in Daerborn, Michigan have forgotten the month of fasting. But the staff of the community centre where the Masjid-Al-Salaam-Mosque is located, announced the beginning of Ramadan in big letters. "Ramadan Kareem" gives believers an encouraging motto to take with them and translates roughly as "Have a generous Ramadan" Digital mosque: many people say that Germany lags behind when it comes to the Internet. Be that as it may: Benjamin Idriz is Imam of the Islamic Forum in the Upper Bavarian city of Penzberg, and he too is using his mobile phone to post his recitation of the Koran on the Internet afterwards. Even in this image detail it becomes clear why the mosque opened in 2005 won an award for its architecture No-one to admire the illuminations: not only the Galata Tower in the Istanbul district of Beyoglu is deserted this evening. The authorities have also decreed that the mosques in Turkey will remain closed, regardless of Ramadan. Turkey is also struggling with COVID-19. And so while the bird's eye view of Istanbul at night remains picturesque, it is also somewhat oppressive The call of the muezzin: for some in Kathmandu it is still business as usual. On the first day of the holy month this muezzin rises up and recites the Azan, the Islamic call to prayer. Despite the coronavirus pandemic, the call to communal prayer will continue to be heard several times a day in the capital of Nepal An exhibition hall serves just as well: the modern exhibition building in Singapore is actually intended for completely different things. However, economic activity has come to a standstill worldwide, and a sales show in the "Expo Convention Hall and Exhibition Centre" is unlikely to take place any time soon. The building has now been converted into a facility where patients can recover from their COVID-19 disease and pray during Ramadan

Experts have warned that huge, mostly maskless crowds at political rallies and religious festivals have fuelled India's caseload, and in the Himalayan city Haridwar, maskless Hindu pilgrims have ignored social distancing pleas. Adding Sputnik to its roster of jabs bolsters the government's ambitious goal of vaccinating 300 million people by the end of July.

"The trajectory of this pandemic is growing... exponentially. This is not the situation we want to be in 16 months into a pandemic, when we have proven control measures."

The devaluation of the Egyptian pound combined with rising food prices is taking its toll on Egypt. More and more people are slipping into poverty. Karim El-Gawhary reports from ... END_OF_DOCUMENT_TOKEN_TO_BE_REPLACED

Egyptian Sufis have been on the defensive against the country's Islamists for decades. Meanwhile, interest in mysticism is growing among the young members of Cairo’s middle and ... END_OF_DOCUMENT_TOKEN_TO_BE_REPLACED

Abortions are illegal in Egypt unless they are necessary to save a married woman's life. But that doesn't stop local women from having one. Egyptian society needs to acknowledge ... END_OF_DOCUMENT_TOKEN_TO_BE_REPLACED

Food prices doubled, salaries halved, banks restricting withdrawals: Egyptians now have the same problems as the Lebanese. But if things get worse here, the fallout will be far ... END_OF_DOCUMENT_TOKEN_TO_BE_REPLACED

Giessen, Eichsfeld, Kusel, Berlin – cars bearing old German number plates are the latest trend on the streets of Cairo. Many Egyptians regard the discarded plates as chic. What ... END_OF_DOCUMENT_TOKEN_TO_BE_REPLACED

Chinese President Xi Jinping's visit to Saudi Arabia in December 2022 may have rattled Washington, but it simply highlighted the Arabs’ desire to diversify their foreign relations ... END_OF_DOCUMENT_TOKEN_TO_BE_REPLACED
Date:
Mail:
Send via mail

END_OF_DOCUMENT_TOKEN_TO_BE_REPLACED
Social media
and networks
Subscribe to our
newsletter