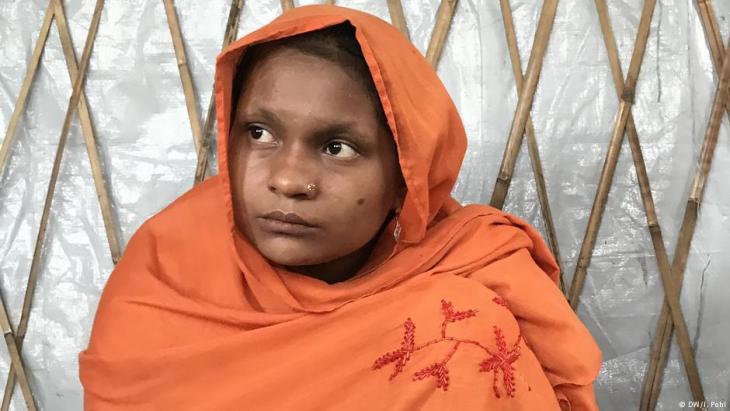 Fatima was gang-raped during attacks on Rohingya Muslims as part of Myanmar's ethnic cleansing campaign. Now, she and her family live in a camp in Bangladesh with few prospects, Ines Pohl reports

The rhythmic pitter-patter of the rain on the white tarpaulin roof is the only sound to be heard in the camp: no television, no music, no children laughing. The silence is in stark contrast to the noisy streets of Cox's Bazar, which we passed though on our way here.

The quiet is only interrupted by the sound of the muezzin's voice; his calls to prayer are broadcast over the hills and through the muddy valleys from silver-grey speakers hung from trees.

Camp 7 is located in the northeast section of Kutupalong, the world's largest refugee settlement. Officials estimate that up to 40,000 people live per square kilometre. Nobody knows the exact number of Rohingya people stranded in the coastal town on the border between Bangladesh and Myanmar, an area that was once jungle. Some reports say 1 million people live among the camps, but it could be 1.2 million or even more.

From a hilltop, you can survey the camps. Rows of huts stretch as far as the eye can see. Plastic tarps serve as roofs on structures made from bamboo; very few houses have tin roofs.

Ethnic cleansing and the aftermath

Rohingya have fled Myanmar since the 1970s. Within the space of a few months last year, more than 700,000 people from the Muslim minority fled to Bangladesh to escape the intensifying brutality and violence at home. Nobody knows how many people were murdered, but one thing is clear: it is one of the worst genocides in the recent history of South Asia. 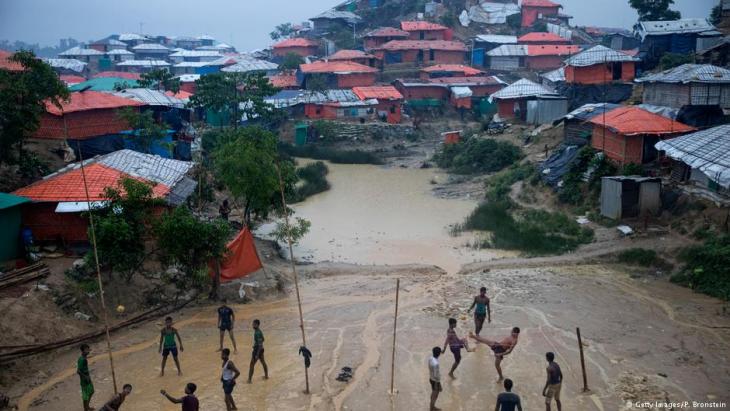 At best makeshift: Fatima and Ali live in one of Kutupalong's illegal camps, which were built very quickly last year to accommodate the displaced people arriving in their hundreds of thousands. Although Fatima wants to return to Myanmar, the couple expect they will have no choice but to remain. Without valid documents, they are officially stateless and at the mercy of Bangladesh's government

Fatima is one of the survivors. She rubs her fingers over her teeth, picking at gums inflamed from chewing tobacco and betel leaves. The habit has helped a little at this particularly traumatic time, but it has also blackened her teeth. On some fingers, her nails are chewed down to the cuticles.

Fatima is 20 years old and has two small boys. Before she fled Myanmar, she was raped 30 to 40 times in a single night. She is unable to recall how exactly how many times or how many men there were. "I left my body there," she says, speaking with a soft voice, her gaze fixed on the trodden soil.

We sit on a carpet striped turquoise and red in the front room of Fatima's hut. Her husband, Ali, two years older than his wife, sits next to Fatima as she tells her story.

With the first COVID-19 case having been detected in the Kutupalong Rohingya refugee camp in Bangladesh, aid agencies are warning that without additional resources, there will be ... END_OF_DOCUMENT_TOKEN_TO_BE_REPLACED

According to the latest Reuters tally, more than 2.54 million people are now reported to have been infected by the novel coronavirus globally and 177,004 have died. As Muslims ... END_OF_DOCUMENT_TOKEN_TO_BE_REPLACED

Around the Islamic world, lockdowns and curfews are being extended and religious ceremonies are being cancelled outright in the hope of slowing the spread of COVID-19. Here’s the ... END_OF_DOCUMENT_TOKEN_TO_BE_REPLACED

Myanmarʹs Aung San Suu Kyi and Hungaryʹs Viktor Orban have discussed their mutual fear of Muslims. In doing so, the Burmese leader has again showed she has lost the moral standing ... END_OF_DOCUMENT_TOKEN_TO_BE_REPLACED

Some four million people in Assam state, nearly all of them Bengali Muslims who have lived in India for more than four decades, are at risk of disenfranchisement after being ... END_OF_DOCUMENT_TOKEN_TO_BE_REPLACED

Five years after the biggest industrial disaster in Bangladeshʹs history, there appears to be no relief in sight for the thousands of survivors who are still suffering from severe ... END_OF_DOCUMENT_TOKEN_TO_BE_REPLACED
Author:
Ines Pohl
Date:
Mail:
Send via mail

END_OF_DOCUMENT_TOKEN_TO_BE_REPLACED
Social media
and networks
Subscribe to our
newsletter