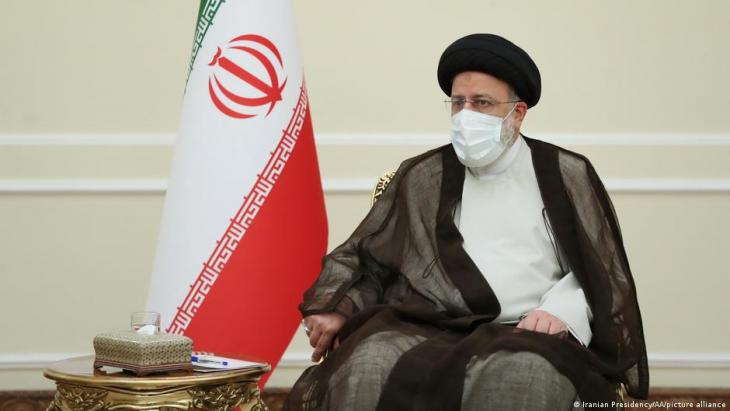 Executions on a scale not seen for years. Mass arrests of regime critics including top film-makers. Trials of foreign nationals denounced as a sham by their families.

Activists argue Iran is in the throes of an intensified crackdown affecting all sectors of society from trade union activists, to campaigners against the enforced wearing of the headscarf for women, to religious minorities.

The repression comes one year into the rule of President Ebrahim Raisi, the ultra-conservative former judiciary chief who in August 2021 took over from the more moderate Hassan Rouhani.

Raisi and Supreme Leader Ayatollah Ali Khamenei, who remains Iran's number one figure, are battling an economic crisis, as well as a sequence of disasters, including a deadly building collapse in Abadan in May, that have sparked unusual protests.

The economic troubles are partially caused by sanctions over the Iranian nuclear programme. But there is so far no sign world powers and Iran's leadership are close to the breakthrough needed to revive the 2015 deal over the atomic drive.

"The current crackdown is intimately linked with the upsurge of protests in Iran," said Ali Fathollah-Nejad, Iran expert at the Issam Fares Institute for Public Policy and International Affairs and American University of Beirut.

He said nationwide protests in December 2017 and November 2019 had left their mark on Iran's leadership and, while the protests are at root socio-economically driven, they "swiftly turn political and have targeted the entire establishment."

"Street protests continue to be a threat to regime stability," he added.

The rise in executions has been startling, with Iran putting to death twice as many people in the first half of 2022 as it did in the same period a year earlier, according to Iran Human Rights, a Norway-based NGO, which now counts at least 318 hangings this year.

Amnesty International has said Iran is on an "execution spree" with hangings now proceeding at a "horrifying pace". IHR said that those executed have included 10 women, with three hanged in a single day on July 27, all for murdering their husbands.

Meanwhile, Iran has also resumed amputating the fingers of prisoners convicted of theft, with at least two people suffering this punishment this year which was implemented by a guillotine specially installed in Tehran's Evin prison, Amnesty said.

There has been a growing movement inside and outside Iran – based around the hashtag "#edam_nakon" (don't execute) – to halt the use of the death penalty in the Islamic republic, which executes more people annually than any nation other than China.

One prominent voice has been director Mohammad Rasoulof, whose chilling anti-capital punishment movie "There is No Evil" won the Golden Bear at the Berlin film festival in 2020.

But Rasoulof was arrested in early July after launching in May a petition from directors and actors urging security forces to lay down their arms in the face of protests.

Fellow prize-winning director Jafar Panahi, who for years has been unable to leave Iran, was then detained when he went two days later to inquire about the whereabouts of Rasoulof and told he had to serve a six-year sentence previously handed out.

Behind bars, they join other celebrated dissidents, including the rights activist Narges Mohammadi whose life, rights groups fear, is at risk due to health conditions prison authorities are failing to treat.

The crackdown has also seen the arrest of a number of relatives of victims of the authorities' violent suppression of protests in November 2019 who have been seeking justice for their loved ones.

"There is no reason to believe these recent arrests are anything but cynical moves to deter popular outrage at the government's widespread failures," said Tara Sepehri Far, senior Iran researcher at Human Rights Watch, accusing the government of resorting to "its repressive reflex of arresting popular critics".

There have also been arrests in the last two months of the Bahais, in what the Bahai International Community (BIC) calls an "escalating crisis in the Iranian government's systematic campaign" against the country's largest non-Muslim religious minority.

At least 20 dual or foreign nationals remain jailed, under house arrest or stuck in Iran, according to the New York based Center for Human Rights in Iran (CHRI), in what their families term a policy of hostage-taking aimed at extracting concessions from the West.

In July, Iran allowed German-Iranian Nahid Taghavi out of jail for medical treatment and released Iran-UK-US citizen Morad Tahbaz with an ankle bracelet. Both, however, remain unable to leave Iran, while a Polish citizen, Belgian, Swede and two French have joined those in prison.

Those behind bars include German national Jamshid Sharmahd who, according to his family, was abducted in the Gulf in July 2020 and now risks the death penalty in a trial expected to reach its conclusion in the next weeks.

"This is a framed job against him aimed at persecuting dissidents and journalists who use their freedom of speech in the free world," his daughter Gazelle Sharmahd told journalists. "It is outrageous we let this happen," she said.    (AFP)

END_OF_DOCUMENT_TOKEN_TO_BE_REPLACED
Social media
and networks
Subscribe to our
newsletter