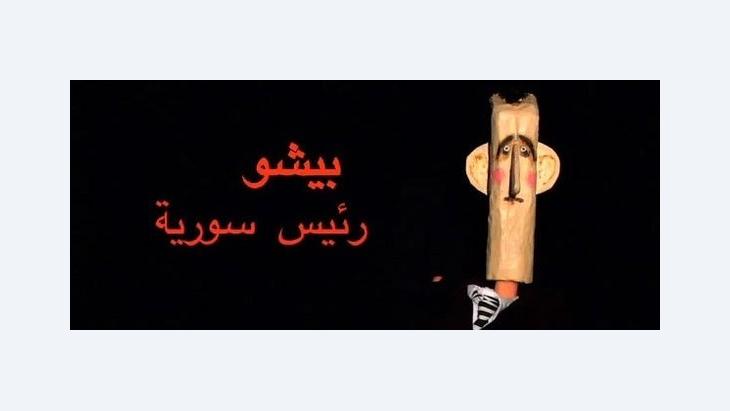 ﻿With sketches from the "Diary of a Little Dictator", the puppet theatre group "Masasit Mati" is one of the many creative forms of protest to emerge on the Internet and on social networking sites in Syria. Mohamed Ali Atassi takes a closer look at how this particular brand of political satire rails against the Assad regime

Repression, propaganda and the cult of personality have succeeded in Syria, and for many years to cover up with the heavy blankets of fear and terror the nudity of the despot. Everyone knew that the king was naked and everyone was involved in hiding this nudity. This is why the first aim of the Syrian Revolution is precisely to remove this heavy fig leaf that hides the nakedness of power.

Therefore it is no wonder that the name of the President is directly targeted by the slogans coming from the Syrian Revolution.

Like rioters who defied power and its symbols in the street, certain artists and scholars have tried to play a role in this area, whether through their artistic and literary production or their political positions. Some of them were up to participate in events in which they were assaulted and imprisoned. These heavy pressures have forced some to hide, to leave the country or to remain silent. 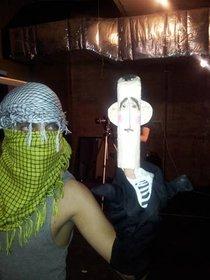 Slapstick and political satire at the expense of the Syrian dictatorship: President Assad comes in for merciless criticism and mockery in all episodes of "Masasit Mati"

​​This state of oppression of the freedom of expression has provoked a new artistic form that has succeeded in getting round the control and tyranny to defend the principles of freedom and dignity of the revolution.

Among the artistic expressions that have spread on the Internet and on social networks, we note the theatre group of puppets "Masasit Mati" which refers to the drink Mati consumed in the Arab East. This group has created a page on Youtube and Facebook and has published a series of sketches filmed with the name "A diary of the small dictator" where the main character is a wooden puppet called "Bichou" which represents the current Syrian president Bachar Al Assad and which greatly resembles him.

There is also another puppet called "Chebbih" which represents the police and also two other dolls called "The daughter of Chem" and "The sound of freedom". Each puppet is worn on the hand as a glove and manipulated with three fingers. The actors hide themselves in a wooden theatre not exceeding one metre by one metre in length and width and move the puppets made secretly in Syria by an artist, a friend of the group.

The group started publishing the series from the month of November with a five-minute episode every week. So far it has produced 15 episodes, translated fully in English and tackling quite bravely the personality of the Syrian President in a caricatural way and in situations linked with the Syrian revolution. For example, the President is seen suffering from insomnia because of nightmares about his declining power, or, in another episode, the outbreak of a revolution within the President's own family with his own children who are appalled by the killings of Syrian children.

The members of this group are young actors who exchange the roles among themselves and who participated together in the writing of the script of the fifteen episodes. They all left Syria and prefer to remain anonymous so as not to put their families in danger.

One of them who has just left the country says: "The puppet theatre that we are presenting is like the demonstrations in which we took part. In both cases we have violated what was prohibited and bypassed the red lines that the political power has dug in our heads. When I play the role of Bichou and when I dare criticise the sainthood that everyone was trying to give to the President, I have the same feeling as that which provokes me to shout in the street of Damascus: 'The people want the fall of power'.

"In both cases, there is a moment of freedom and a moment of confrontation with fear set deep inside of me, and as fear didn't leave me during the riots, it was also present in me when I was writing and presenting the sketches. We have acted in both cases and it was a joy doing it. Sometimes we would stop acting and we would joke while imagining that we have been hanged by the arms together with our puppets". He also explains why he left Syria before his work was broadcast on the Internet: "After all I am just an ordinary man and I don't want to be a hero."

Fear of the puppet

The complex emotions that tie these artists to their puppets is incredible. The nature of this artistic work and the construction of the personalities force them to play along with the puppet Bichou without rejecting it, especially when he has inspired them so much and made them write all the episodes. But after many reruns, during the rehearsals, it has happened that the actors have to stop suddenly and take off the puppet because of a momentary block to adapt to the character.

"Sometimes, it just felt impossible to move the puppet and I just wanted to get rid of it," admitted one of the actors. "Therefore often we said to ourselves that Bichou is just representing the President of the Republic and that he is not guilty of the acts of the latter."

Rogues' gallery: Assad clan, Ba'ath party members and representatives of the security apparatus in "Top Goon – the Diaries of a Little Dictator" by the puppet theatre group "Masasit Mati"

​​With the last episode of this series called "The last chapter of hell" borrowed from the poet Arthur Rimbaud and written at the beginning of the project, this problem was overcome and the necessary energy was released to write the other episodes, since from the beginning it created the necessary distance between the puppet and the actor and has permitted interaction between them.

A mobile theatre for the towns of Syria

In fact, in this episode a discussion between Bichou and the actor takes place where the actor resurfaces. When Bichou orders the actor to return to his place, the latter disobeys and removing the puppet from his hand, finally freeing himself from this character.

The group "Masasit Mati" was keen on filming all the episodes and to broadcast them gradually on Youtube and Facebook so as to reach as many people as possible in Syria.

After the success of the revolution the members of the group want to create a mobile theatre of puppets presenting this work in all the villages and towns of Syria, starting from the towns where the revolution sparked off.

Research project "The Global Qur'an", brainchild of Professor of Islamic Studies Johanna Pink and sponsored by the European Research Council, analyses the history and ... END_OF_DOCUMENT_TOKEN_TO_BE_REPLACED

Arab youth express their hopes and wishes for the New Year, spanning everything from civil and political rights, to education, to arts and culture. By Rafiah Al Talei END_OF_DOCUMENT_TOKEN_TO_BE_REPLACED

Moncef Marzouki was Tunisia's first democratically elected president after the fall of dictator Ben Ali. Today he is the most prominent critic of increasingly counter- ... END_OF_DOCUMENT_TOKEN_TO_BE_REPLACED

Historically Iraq's Yazidi community was isolated, under-resourced and very conservative. Seven years after the "Islamic State" tragedy, the community is more open to the world – ... END_OF_DOCUMENT_TOKEN_TO_BE_REPLACED

Asef Bayat, professor of Sociology at the University of Illinois, Urbana-Champaign, has been studying revolutions and how they affect people since 1979. In his recent book, " ... END_OF_DOCUMENT_TOKEN_TO_BE_REPLACED

END_OF_DOCUMENT_TOKEN_TO_BE_REPLACED
Social media
and networks
Subscribe to our
newsletter