Skip to main content
Criticism of Islam in Germany

Peter Widmann, an academic assistant at the Berlin-based Centre for Research on Anti-Semitism, explains how popular "critics of Islam" use the language of extremists to cast a general shadow of suspicion over Muslims 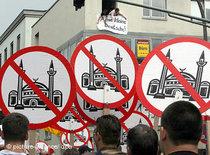 A vague fear and resentment of Islam: members of the extreme right-wing civic movement "Pro Köln" demonstrating against the construction of a mosque in Cologne

​​ For several years now, a number of people in Germany have been pursuing the irrational demonization of Muslims on the pretext of voicing "criticism of Islam". They have been using debates about Islam in general and about anti-Semitism among Muslims in particular to disguise themselves as concerned observers in order to bolster the influence of right-wing populist, right-wing intellectual, and Christian fundamentalist groups on public discourse.

These agitators are active in three areas in particular. Firstly, on the market for popular science books, where a number of writers are painting horrifying images of Islam and are marketing their theories as science despite the fact that they choose to ignore recent historical and sociological research findings.

Secondly, on the Internet, where providers of anti-Muslim hate-sites such as "Politically Incorrect", "The Islam File", or "The green plague" are making it their business to fight the supposed Islamicization of Europe.

Thirdly, at local level, where initiatives that are opposed to the construction of mosques and see every Muslim place of worship as a bridgehead of the Islamic conquest of Europe were founded.

Activists and bloggers on the Internet seek to justify their resentment with assertions made in popular science books and invite the authors of these works to events. In this way, a closely linked network of agitators has developed. This network is led by people who peddle in fear and also seek to benefit not only politically but also financially from the sale of books, website advertising banners, and items of propaganda.

Portraying Islam as a threat to humanity 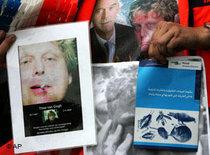 An anti-Islam demonstration in Amsterdam: Growing Islamophobia did not suddenly become an issue after September 11 and the murder of the Dutch film-maker Theo van Gogh

​​ These people see "Islam" as the greatest contemporary threat to humanity. They are a far cry from both reputable observers who criticise certain Muslim organisations, their platforms, or actions, and academics, social and educational experts, or interest groups who address clearly defined and empirically proven phenomena in the Muslim migrant community.

These so-called "critics of Islam" are much more interested in casting a general shadow of suspicion over Muslims and portraying Islam not only as the epitome of a violent ideology, but also as so anti-Semitic, misogynistic, homophobic, and anti-democratic that the integration of its followers into western societies can only be doomed to failure.

To view the actions of this group of people as an extreme reaction to the terrorist attacks of September 11 in 2001 or the murder of the Dutch film-maker Theo van Gogh in 2004 would be to underestimate the phenomenon. The roots of this Islamophobic propaganda go much deeper than that. It radicalizes the populist and extremist rhetoric of the 1980s and 1990s that sought to warn against a dreaded inundation of foreigners.

"The West – ruled by a foreign power…"

Back then, the agitators saw foreigners – asylum seekers in particular – irritating parasites and criminals. Today the declared fear is much greater: the core message couched in this propaganda is that Germans and Europeans are at risk of being "Islamicized", ruled by a foreign power that would all but destroy the West.

​​ The rhetorical patterns are in line with extremist traditions. As illustrated by the political scientist Oliver Geden, right-wing populist propaganda feeds on a basic story, namely that a silent majority of the native population is exposed to two threats: firstly, the threat from outside posed by minorities, foreigners, or deviants, and secondly, the threat from inside posed by the domestic elite, "the politicians", who have turned their backs on the interests of the nation and have allied themselves with the minorities.

The wholesale criticism of Islam outlined above adheres to this very template. However, it is also driven by other motives, all of which are characteristic of the right-wing scene: xenophobia, the cultural decline scenario for which liberalism, "the generation of 1968", or the inundation of foreigners can be held responsible, and the populists' portrayal of themselves as breakers of taboos and fearless militants fighting a dictatorship of political correctness.

In one aspect, however, Islamophobic propaganda often deviates from conventional rhetoric: these kinds of books often contain repeated references to Judaism and Israel that initially seem positive. Recently, for example, Udo Ulfkotte – a former editor at the Frankfurter Allgemeine Zeitung and an opponent of Islam – and his "Pax Europa" association sought to defend the "Judaeo-Christian culture of Europe".

Moreover, the "Wertheimer Appeal", which was drafted by anti-mosque activists in June 2007, uses the "Judaeo-Christian-Humanist tradition of Europe" to justify its demand to review the application to Islam of the principle of religious freedom that is anchored in the German constitution.

Combating the imminent Islamicization of the West

Both familiar and new themes can be found in a more condensed form in the works of writer Hans-Peter Raddatz, who is hailed in Islamophobic circles as an academic hero. Since 2001, Raddatz has published a series of popular science books in quick succession. These books bear titles like From God to Allah?, From Allah to terrorism, and Allah and the Jews. The Islamic Renaissance of Anti-Semitism.

Raddatz portrays himself as an expert and refers to himself as the "elder statesman of Orientalism". Under the supervision of Otto Spies and Annemarie Schimmel, he was indeed awarded a doctorate in Islamic Studies by the University of Bonn in 1967 for his work on a subject relating to early Islamic spiritual history.

He then switched from academia to business. In the second half of the 1990s, he appeared in the public eye as a writer in order to  as he says himself  combat the imminent Islamicization of the West.

Instead of addressing himself to experts, Raddatz searched for an environment in which ultra-conservatives could meet right-wing extremists without inhibitions. Between 1997 and 2001 he wrote articles for the right-wing weekly Junge Freiheit.

After September 11, he became an expert on Islam for the general public. Nevertheless, he held fast to his view of the world, which is coloured by the mind-set of the right wing. Such views include the anti-modernist grievance about lost identity, the belief in conspiracies, and the tendency to see all foes as absolute enemies.

In Allah and the Jews, for example, Raddatz barely disguises his call for radical measures. Writing about the expulsion of the Moriscos from Spain in the early seventeenth century – Muslims who in many cases were forced to convert to Christianity and be baptised – he says: "The Iberian expulsion was only necessary on this scale because those 'in charge' at the time had been too slow to take action. Today, all measures that seek to protect the people are completely blocked because they are considered 'populist' if not even racist. For this reason, the consequences will be much more drastic today than they were all those years ago in Spain."

A fourth feature of Raddatz's world view is also alarming, namely the reversal of perpetrator and victim roles in history. He considers the Germans to be the future victims of a genocide perpetrated by Muslims. The book Allah and the Jews ends with the following warning: "If the Germans for their part remain permanently incapable of liberating themselves from this tendency, there is no reason – with the exception of America's influence – why the fate of Israel, a victim nation, should not be extended to and completed in Europe, starting with Germany, the perpetrator nation."

The intention is to portray Islam as a genocidal religion and Muslims as the most significant enemies of the Jews both in the past and the present day. In this way, Raddatz and other "critics of Islam" are trying to cast a relatively soft light on the history of the persecution of Jews in Germany and Europe.

Peter Widmann is an academic assistant at the Centre for Research on Anti-Semitism in Berlin (ZfA). This text is based on an article that was published by Metropol-Verlag, Berlin, in the ZfA's Jahrbuch 17 (2008).

Interview with Seyran Ates
"Silence Makes Me An Accomplice"
Seyran Ates was born into a Turkish family and moved from Istanbul to Berlin at the age of six. Now a successful lawyer and writer, she has been working for the rights of women for many years. Naima El Moussaoui spoke to her in Berlin

END_OF_DOCUMENT_TOKEN_TO_BE_REPLACED
Social media
and networks
Subscribe to our
newsletter