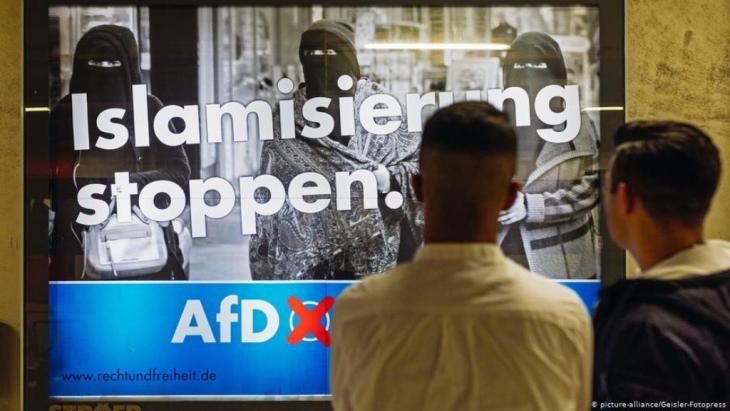 Photos
Criticism of Islam versus Islamophobia in Europa

Germany's AfD party claims its critical attitude towards Islam is religious criticism and hence falls under the right to freedom of expression. Yet the party fails to back its claim with convincing arguments, writes social scientist Ulrich Paffrath from the Frankfurt-based Academy for Islam in Research and Society in this feature for Qantara.de

When Germans mention "Islamophobia", the role of the country's right-wing party AfD (Alternative fur Deutschland / Alternative for Germany) is always part of the issue. The party insists its views on Islam constitute a form of religious criticism and are thus protected by the right to freedom of expression. But many accuse the party of fomenting latent resentment.

The real question then is whether what the AfD says in statements, interviews and its party programmes can in fact be considered religious criticism – or whether this assertion merely serves as a cover for fundamental hostility towards Islam and those identifying as Muslims.

Where does religious criticism end and Islamophobia begin? The distinction – apart from overtly criminal statements or actions – remains controversial.

AfD deputy party leader Beatrix von Storch said in a newspaper interview that Islam was "a political ideology that is not compatible with the Constitution". Nicolaus Fest , a former journalist at Springer and now a member of the interim executive committee of the Berlin AfD, also made a public statement after joining the party: "I consider Islam less a religion, than a totalitarian movement that is more akin to Stalinism or Nazism." Islam does not separate state and religion, he said, and is therefore a political ideology. The AfD party agenda takes a similar stance: "Minarets are to be forbidden as signs of Islamic rule, as is the muezzin call, according to which there is no other god but Allah."

This is a commonplace sleight of hand used by critics of Islam. First, Islam is deprived of its status as a religion. Then it is classified as a political ideology. The next step is to emphasise one's own unqualified commitment to freedom of religion, conscience and creed – but not in relation to Islam, because these constitutional rights do not apply to a political ideology.

For the AfD, the relationship between its "Islam-critical" positions and criticism of religion is clear. The party members view their own statements as "critical of Islam" and not "hostile to Islam". They believe they are well within the boundaries of religious criticism, and so statements on Islam are covered by freedom of expression.

This apparent clarity dissolves, though, as soon as we consider both Muslim and non-Muslim reactions to the AfD's statements. They are in fact not perceived at all merely as religious criticism, but are often seen instead as veritable "Islam-bashing", as "Islamophobic" and also quite frequently as "critical of Islam". The nuances are by no means without semantic consequences. The term "criticism of Islam" has much more legitimacy than the term "Islamophobia". In order to draw a line between the two terms, it is helpful to first of all focus on the question of whether religious criticism is in fact present here at all.

Home
Print
Newsletter
More on this topic
Art and the AfD: Peddling high-brow IslamophobiaAnti-Muslim racism: Merkel and "the danger of self-Islamisation"Anti-Semitism and Islamophobia in Europe: The eternal Muslim Germanyʹs Islam debate: The need to meet Islam critics head on
Related Topics
AfD | Alternative for Germany, Criticism of Islam, Freedom of religion, History of the Near and Middle East, Islam in Germany, Islamophobia, Muslims in the West, Racism | discrimination, Right-wing populism, Rule of law
All Topics

Among Muslims, the image of women as "cossetted hijab-wearing princesses" is frequently invoked. But Muslim women have long wanted to be more. In her essay, Karoline Roscher- ... END_OF_DOCUMENT_TOKEN_TO_BE_REPLACED

The USA and NATO plan to withdraw from Afghanistan by September. The operation is risky, the outcome uncertain. Many Afghans fear civil war. The quake on the Hindu Kush will also ... END_OF_DOCUMENT_TOKEN_TO_BE_REPLACED

Even in times of war and pandemic, refugees are still being deported to Afghanistan. Several deportation flights have taken place in recent weeks alone. Since those affected often ... END_OF_DOCUMENT_TOKEN_TO_BE_REPLACED

On 7 March, Switzerland became the latest European country to vote in favour of a so-called "burka" ban. It was yet another feather in the cap of the right-wing populist Swiss ... END_OF_DOCUMENT_TOKEN_TO_BE_REPLACED

German Middle East analyst Guido Steinberg and television journalist Ulrich Tilgner have both published new books on the conflicts in the Middle East. Their analyses and their ... END_OF_DOCUMENT_TOKEN_TO_BE_REPLACED

END_OF_DOCUMENT_TOKEN_TO_BE_REPLACED
Social media
and networks
Subscribe to our
newsletter