Muhammad Sven Kalisch is an Islamic researcher at the University of Münster. He is also the first person in Germany to hold a Chair of Islamic Religion. Kalisch's recent public admission that he is unsure whether the Prophet Muhammad was actually a historical person has got him into hot water. Peter Philipp has the details

In the crossfire: while Kalisch's statement has been widely criticised by Islamic organisations in Germany, Kalisch himself has called for critical research into the history of Islam

​​The plan to train teachers to teach Islamic religious education at German schools has suffered a major setback in recent days. The Co-ordination Council of Muslims in Germany (KRM), to which the four largest Muslim organisations in Germany belong, has discontinued its co-operation with the Centre for Religious Studies at the University of Münster, which became the first centre of its kind in Germany to offer teacher-training courses for teachers of Islamic religion.

The dispute centres around the Director of the centre, Professor Muhammad Sven Kalisch, who converted to Islam at the age of fifteen. Speaking in a radio interview, Kalisch said that following extensive research and study, he had come to what is for a Muslim a particularly controversial conclusion, namely that the Prophet may not in fact have been a historical person.

"The results were such that it is my conviction that it cannot be proven whether Muhammad actually lived or not," said Kalisch. "I believe that there is no definite answer to this question, although I must admit that I tend more towards the view that he did not exist. However, one must be able to say so and one must be able to have an academic debate about it."

The Co-ordination Council of Muslims is not, however, willing to enter into such an academic debate. The spokesman for the council, Ali Kizilkaya, says that this is neither the job of the council, nor is it the point at issue.

Ali Kizilkaya: "We are convinced that the Prophet did indeed exist and that the Koran is the word of God."

He went on to say that as far as the Co-ordination Council of Muslims is concerned, this is not about the question of the academic freedom of the researcher, but about whether someone with these views and convictions, someone who harbours doubts about the foundation of a particular religion, is the right person to train teachers of that religion.

This is why the council not only withdrew from the advisory council of the centre, but also called on young Muslims not to apply for the course on offer there.

The anger about the professor's theory and the withdrawal of the Co-ordination Council of Muslims are likely to set back efforts to improve the integration of Muslims in Germany several steps.

Despite the fact that German authorities and the country's most important Muslim associations had already reached agreement on the subject, the introduction of Islamic religious instruction at German schools taught by teachers trained in Germany is now likely to be postponed again, at least in the country's most densely populated state, North Rhine-Westphalia.

Since September 11, 2001 at the latest, great importance has been attached to the issues of "integration" and "dialogue with Islam" in Germany. 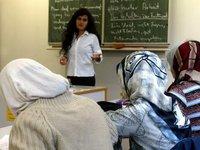 ​​The fact that some of the terrorists involved in the attack had gone entirely unnoticed in Germany, living in the country as so-called "sleepers", increased the fear that other Muslims in Germany could be exposed to the influence of radical groups and, in particular, that Muslim children and young people could be indoctrinated by religious fanatics in private religion classes.

Until that point in time, little attention had been paid to the fact that approximately 800,000 children in Germany's 3 million-strong Muslim community did not receive religious instruction in German state schools, but instead in "back street Koran schools", where teachers and curricula go largely unmonitored by state school authorities.

According to Article 7 of the German constitution, religious communities are given a say in the structuring of religious instruction classes, which are also anchored in the constitution. This works well for the Christian Churches, which would certainly not allow their religion teachers to study under someone who calls the fundamental beliefs of the Christian faith into question.

In the case of Muslims, however, the situation is much more complex because they have not yet, as a religious community, acquired the status of a corporation in Germany - a status already enjoyed by the main Christian Churches and Judaism and one which brings a number of privileges with it. The establishment of the Co-ordination Council was a first step in this direction. However, the road to the same legal status as that enjoyed by the Christian and Jewish community in Germany is a long one.

The longer it takes to settle the question, the more it will undermine the integration project because children will get the impression that there is no place for their religion at school. Just how long it will take for things to get back to normal is anybody's guess. Ali Kizilkaya is certainly not in a position to say, particularly not after the dispute with Professor Kalisch.

Islamic Religion and Studies at German Schools
Many Obstacles to Overcome
Trial lessons are being held in many of Germany's Länder. But "Islamic Religion" is still not being provided as a standard part of the curriculum in Germany. By Lamya Kaddor

Germany
Islam on the Curriculum
Until now, only Koran schools have offered lessons in the Islamic religion to Muslim children in Germany. Now, pilot programmes are to be carried out at German schools, too. Max Bönnemann reports.

Islam and Religious Criticism
A Question of Decency and Tact
Muhammad Kalisch, Professor for Islamic Studies at the University of Münster, Germany, sharply criticises that Islam in Western media is often portrayed as "the enemy", but argues that there must be absolute freedom of speech

END_OF_DOCUMENT_TOKEN_TO_BE_REPLACED
Social media
and networks
Subscribe to our
newsletter