Skip to main content
Criticism of the "Save Darfur" Campaign

The UN estimates that some 300,000 lives have been claimed to date by the conflict in Darfur. The American Save Darfur Coalition is successfully working to increase awareness of the injustices, but critics say the campaign is blighted by its glaring ignorance of the complexities of this conflict. Claudia Mende reports 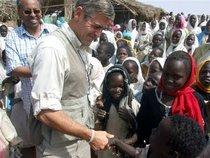 ​​When it comes to crisis regions in Africa, the spotlight is most definitely on Darfur. The conflict began in 2003 in western Sudan on the border with Chad, with an armed uprising against central government in Khartoum that unleashed a brutal campaign by the Islamic military government. As ever, it is the civilians who are suffering the most.

In the United States, the Save Darfur Coalition has snowballed into a widespread and vociferous campaign for Darfur. But critics accuse Save Darfur of actually doing little to help Sudan.

It is primarily the armed horseback militias known as the Janjaweed that have repeatedly terrorist the civilian population since 2003, by attacking villages and killing residents. They also destroyed wells and crops to hamper any attempts at reconstruction.

The Janjaweed were armed by the Islamic government in Khartoum. Some of their actions are direct orders from Khartoum, and they repeatedly receive backup in the form of bombing raids by the regular Sudanese army. The Janjaweed's victims are for the most part members of those ethnic groups that join the rebel cause.

The number of people who have reportedly died in the violent clashes is disputed, because Darfur is, even by African standards, an underdeveloped region with a rudimentary infrastructure. This is a place where people face a daily fight for survival even in peace times. The largest violent loss of life took place in the years 2003 and 2004. Since 2005, the most common causes of death have again been malaria, malnutrition and intestinal infection.

The Save Darfur Coalition was just getting into gear in 2005. More than 180 political and religious groupings had thrown their weight behind the campaign by this time. 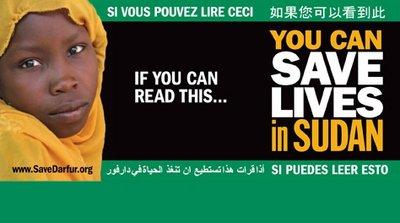 ​​Christian, Jewish and several Muslim organizations such as the American Islamic Congress and the Islamic Society of North America have a total annual budget of some nine million dollars. A total of 25 full-time employees work at Save Darfur's Washington headquarters, which focuses exclusively on political lobbying. For years, the campaign was aimed at inducing the US government to take military action in Sudan, "to prevent the first genocide of the 21st century."

Hollywood stars such as George Clooney and Mia Farrow repeatedly supported Save Darfur with highly effective publicity campaigns. Both actors visited Darfur and the refugee camps in neighboring Chad several times. Their actions helped the Save Darfur Coalition to the prominence it currently enjoys in the United States.

Mia Farrow fasted for 21 days for Darfur this year, after the Bashir government banished 16 aid organizations from the region. This was the regime's tit-for-tat response to the International Criminal Court in The Hague, which had issued an international arrest warrant against the Sudanese President Omar al-Bashir.

Religious element to the conflict can be discounted

No one can deny that the campaign is vociferous and media-savvy. But critics say it has a black-and-white view of the conflict that affirms prejudices against Muslims and Arabs and does not contribute anything to a potential solution. 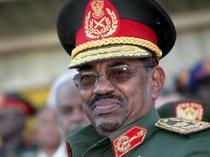 "The Khartoum government has obstructed the work of aid organizations so often, it doesn't need the Save Darfur campaign to provide it with an excuse," says Annette Weber, German researcher and policy adviser

​​One of Save Darfur's harshest critics is Mahmoud Mamdani from Columbia University in New York. Born in Uganda, he is one of the leading African intellectual voices in the US. In an interview with the New York Times, he said: "I am against those who substitute moral certainty for knowledge and feel virtuous even when acting on the basis of total ignorance."

In his latest book "Saviors and Survivors, Darfur, Politics and the War on Terror" Mamdani accuses the Save Darfur Coalition of simply transposing the pattern of the war in southern Sudan onto the situation in Darfur. In the protracted civil war in the south of Africa's largest country, the line of conflict ran between the Muslim-Arab government in the north, and a predominantly Christian-animist black African south.

Mamdani insists that the Arabs-versus-Africans model cannot be applied to Darfur, as the Janjaweed draws its recruits from both Arab and non-Arab nomad communities. And as the population is almost exclusively Muslim, a religious element to the conflict can be discounted. He says the origins of the conflict are much more likely to lie in the profound crisis threatening nomadic traditions, which have not been able to recover since the great Sahel drought four decades ago.

​​British journalist Julie Flint and researcher Alex de Waal from the Social Science Research Council, both with years of experience in Sudan, also doubt the usefulness of Save Darfur in view of the increasingly chaotic situation in western Sudan. In their new book "Darfur. A New History of a Long War", de Waal and Flint say that Save Darfur fuels a demonization of Arabs.

They write that Darfur's rebel movement, which has continued to disintegrate into ever greater numbers of factions and splinter groups since 2003, has also committed human rights violations and is also partly to blame for the fact that no political solution has been found for Darfur. With its simplified portrayal of the conflict, say de Waal and Flint, Save Darfur provides Khartoum with an excuse to hamper the work of aid organizations in the region.

No unilateral allocation of blame

Highly effective publicity campaigns: Mia Farrow fasted for 21 days for Darfur this year, after 16 aid organizations were banished from the region

​​Annette Weber of the German Institute for International and Security Affairs in Berlin finds this last accusation excessive. Even though she is herself critical of the Save Darfur Coalition, she says it cannot be blamed for the obstruction or expulsion of aid organizations in western Sudan.

"The Khartoum government has obstructed the work of aid organizations so often, it doesn't need the Save Darfur campaign to provide it with an excuse," says the researcher. But Weber is also critical of the activists' simplistic view of the conflict in Sudan. "Save Darfur interprets the conflict in clear-cut black-and-white terms. These put the victims in Darfur, and the perpetrators in Khartoum," she says, and adds that a situation such as this one does not lend itself to unilateral allocations of blame.

​​These days, Darfur is further than ever from a political solution, and even the peace between the north and south of the country looks shaky yet again. Prospects for Sudan continue to appear bleak. And simplistic solutions such as foreign intervention must be quite simply abandoned.

Alex de Waal sums it up neatly in his blog: "It is one of Save Darfur's biggest errors to suggest that a solution will come through foreign intervention: if there is to be a solution, it will come from inside Sudan, and must be political, addressed at the structural political challenges of Sudan."

The Tragedy of Darfur
Double Standards Being Applied
Why is it that - in contrast to the attention given to the Middle East conflicts - Arab media and politicians are largely ignoring events in Darfur? Moataz El Fegiery and Ridwan Ziyada look for answers

END_OF_DOCUMENT_TOKEN_TO_BE_REPLACED
Social media
and networks
Subscribe to our
newsletter