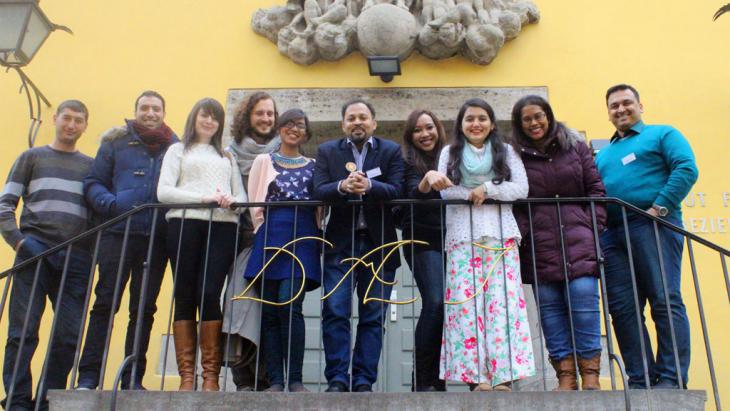 A catalyst for societal change

The CrossCulture programme run by the Institut fur Auslandsbeziehungen (ifa) offers young professionals from Islamic countries the opportunity to work as an intern in Germany. Participants gain an insight into German culture and the country's work environment. The goal of the programme is to promote intercultural exchange and further professional development. By Claudia Mende

They come from the Middle East and North Africa, from Southern and Central Asia, Indonesia, and Malaysia. For a maximum of three months and within the specific area of their chosen profession, the CrossCulture interns from 30 predominantly Islamic countries can become acquainted with the working environment in Germany.

The programme enables young professionals to acquire intercultural skills, make new contacts and gain insight into German culture, including the country's social and political structures. For many, this time in Germany is also the chance to enhance their professional skills, thereby improving their career prospects when they return home.

The CrossCulture programme has been in existence for ten years and is financed by the German Foreign Office. It aims to strengthen German networks in Islamic countries. Since the programme's inception, some 400 interns, some fifty percent of them women, have come to Germany. Every year, a small number of internships are awarded to young Germans, providing financial assistance for working visits predominantly Islamic countries.

In recent years, the popularity of the programme has grown steadily. The number of applicants continues to increase. This year alone, there were around 2000 applications for only 68 places. Currently, the programme is especially popular in Egypt and Pakistan, followed by Iran and Bangladesh.

The exchange programme is meant to help young professionals specialising in the fields of media, culture, the environment, human rights, education, and development co-operation to further their professional skills and social and political competence, while providing them with intercultural experience.

The Jordanian Rawan Baybars worked a three month stint – until the end of October – at the Caritas relief organisation in Eichstatt. Baybars is 27-years-old and comes from Amman. She graduated in marketing, although her work with the Norwegian Refugee Council in the northern Jordanian city of Irbid could more closely be described as that of a social worker. In her position with the Norwegian aid organisation, she attended to the needs of refugees in this border region to Syria, who were living scattered throughout the city and surrounding villages. 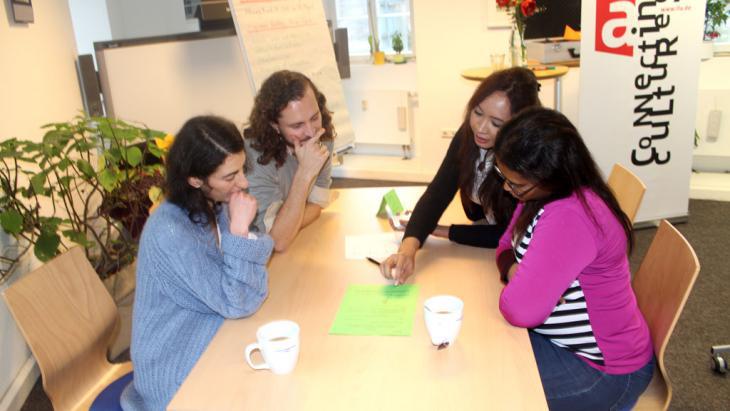 "Looking beyond your own backyard": the CrossCulture internship programme, which this year celebrates its tenth anniversary, promotes intercultural experience and further professional development. Young professionals from abroad are given the opportunity to acquire intercultural skills, make new contacts, and gain insight into German culture, including the country's social and political structures

Although the situation in Irbid is quite different from that in Eichstatt, in principle, her work with Caritas can be compared to her job in Jordan. In Bavaria, she visited refugees in their accommodation; she helped them to prepare documents for the asylum proceedings and inquired about their health, or if there were any difficulties with the schooling of their children.

Her knowledge of Arabic has proved a great help to Caritas. Although she helped to care for refugees both here and at home, the situation in Germany was a completely different experience for the young Jordanian.

She faced challenging cultural differences. "Here in Eichstatt, I was confronted with people from many different cultures," she relates. There were not only refugees from Syria and Iraq, but also from Africa and Afghanistan. She encountered behavioural norms that were unknown to her in Jordan. "I was taken aback when African women breastfed their babies in front of me," she said, for example. "That would not be proper in our culture."

To nonetheless remain professional under such circumstances was difficult at first. She found it disconcerting that social behaviour may be interpreted differently depending on one's culture. On the other hand, she was deeply moved by the hospitality of those from Afghanistan, as she had previously thought that this was a tradition typical of Arab culture.

From culture shock to familiarisation

Dina Ibrahim from Cairo brought home a great many new experiences after completing her three month working visit to Germany at the beginning of October. The 29-year-old has almost completed her master's degree in European and Mediterranean Studies at Cairo University and also works at the "Tahrir Lounge" of the Goethe Institute, where she is responsible for media relations and is also involved in programme planning.

The Tahrir Lounge was set up soon after the overthrow of Mubarak in 2011. Back then it offered numerous activities, such as discussions and workshops on current affairs, which proved extremely popular. Today, the Tahrir Lounge concentrates more on cultural issues. Dina Ibrahim completed her internship in Germany as a research fellow with the Centre for Applied Policy Research (CAP) at the University of Munich.

It was a huge step to come to Germany by herself and to live here on her own. "At first, I experienced a real culture shock here in Germany," says the Egyptian, who had previously been to Europe for only a few days. After a while, I began to get accustomed to things and was amazed at German efficiency and helpfulness. Still, she says that what she misses here is "the passion for life that is so familiar in Egypt."

She was able to share her knowledge of the Middle East with the policy advisors of the CAP and contribute to a review of profiles of countries in the region in English. Over and above these concrete tasks, she joined in and profited from numerous discussions within the team and at meetings with other interns from the region, such as at the Young Leaders Forum in Berlin. Participating in such forums and events is part of the CrossCulture internship.

Dina Ibrahim insists that she was exposed to a wealth of other viewpoints on the conflicts in the Arab world and as a result was able to reconsider her own position. "I've become much more open." For example, she used to consider the issue of environmental protection a luxury concern compared with the vast social challenges facing Egypt. Now, however, she thinks differently about the matter and sees that sustainability will be a key issue for the whole region.

She has come to appreciate confrontation with other cultures, a plurality of positions, and the very different opinions of participants. This will prove valuable for planning the programme of the Tahrir Lounge, as "this task demands a wide horizon." It is another question, however, as to how many of her new ideas she will be able to implement, considering the current situation in Egypt.

Even if the interns are "stifled" upon their return, not everything they have experienced during their stay in Germany is lost, says Eva Sodeik-Zecha, who is responsible for the CrossCulture programme at the Institut fur Auslandsbeziehungen. "A seed has been planted for new societal options, even if it takes years until it can come to fruition."

As a result of her stay in Germany, Dina Ibrahim is convinced that in order to bring about long-term change in Egypt, it is necessary to promote the sort of education that emphasises respect for other people and their beliefs. 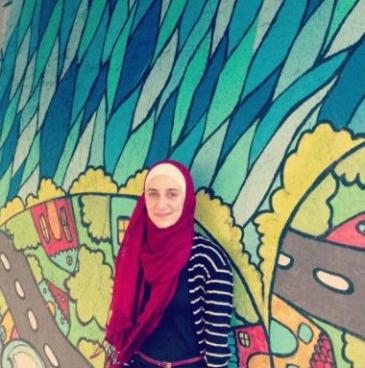 Rawan Baybars, the intern from Jordan, had a more ambivalent reaction to the events and media reports. Some people will think that all of the war refugees are now coming to Germany, she says. In fact, millions have since found refuge in Lebanon and Jordan

Of course, the two female interns have followed the debate in the media about the arrival of refugees in Germany. Dina Ibrahim was delighted at how Germans have shown a friendly welcome to refugees from Syria.

By contrast, Rawan Baybars, the intern from Jordan, had a more ambivalent reaction to the events and media reports. Some people will think that all of the war refugees are now coming to Germany, she says. In fact, millions have since found refuge in Lebanon and Jordan.

In Jordan, some 20 percent of the population now comes from Syria. It is easily overlooked how much of a challenge this poses for Jordan, "even though these refugees are from the same cultural area."

The burden placed upon the social infrastructure, in particular schools and hospitals, as well as on the environment in this arid desert state is enormous. She is troubled by the fact that this issue is ignored in the German debate on how the country can accept so many refugees from Syria.

Confronting another culture and being forced to "leave the comfort zone" (Rawan Baybars) contributes to character development. Even though for many it is initially difficult and unfamiliar, most interns manage to persevere and master the difficulties in a foreign environment.

In the end, they feel more self-confident and independent. Even Dina Ibrahim at first experienced a culture shock. Today she is convinced that "going by myself to a foreign country has made me a much stronger person."

They’ve already got the Louvre; they’ll soon have a Guggenheim Museum as well – and now the Emirates have added literature to their quest for cultural supremacy in the Arab world ... END_OF_DOCUMENT_TOKEN_TO_BE_REPLACED

Years in the making, Sisi's elite New Administrative Capital will isolate most Egyptians from their centres of government in an effort to fortify the regime against any social ... END_OF_DOCUMENT_TOKEN_TO_BE_REPLACED

Professor Timothy Brennan's "Places of Mind: A Life of Edward Said" is a detailed biography of one of the most important intellectuals of the twentieth century, taking us on a ... END_OF_DOCUMENT_TOKEN_TO_BE_REPLACED

China has long portrayed itself as a strong supporter of the Palestinian cause. It has also claimed that in sharp contrast to the stance of the USA, its position is based on ... END_OF_DOCUMENT_TOKEN_TO_BE_REPLACED

Recep Tayyip Erdogan, disappointed by the European Union’s reluctance to integrate Turkey into its ranks, has re-directed his country’s diplomacy toward the Maghreb and Africa to ... END_OF_DOCUMENT_TOKEN_TO_BE_REPLACED

END_OF_DOCUMENT_TOKEN_TO_BE_REPLACED
Social media
and networks
Subscribe to our
newsletter