Exchange with Professionals from Islamic Countries

The project "CrossCulture Internships" gives qualified professionals from the Islamic world and Germany the opportunity to work in another culture. Ariana Mirza asks trainees about personal motivations, goals, and their first experiences 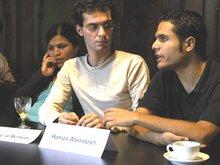 ​​"I'm curious about Iranian contemporary theater. I'm not really afraid of what difficulties I might have there as a woman."

Ursula Schelhaas is a theater specialist at the Theater an der Ruhr. Thanks to a CrossCulture internship she will soon be working for "Artoday" in Teheran.

The objective of this project of the Institute for Foreign Relations is to give qualified, interested persons from the Islamic world and Germany the opportunity to work in another culture for three months. The encounter with unfamiliar conventions is naturally a part of this professional internship.

"If I don't know how to act in a certain situation, I'll ask." Ursula Schelhaas is sure that that Iranians will be understanding if she unintentionally violates any rules that she is not familiar with.

Like Schelhaas, the prospective events organizer Stephan Pöter is also looking forward to encountering another work and living reality. A two-week stay in Iran aroused Pöter's interest in the country. Now he wants to get to know the country better.

From their work stay in the Islamic cultural region, young German professionals hope to gain inspiration and more knowledge, as well as to shed a few prejudices. This attitude pleases the Iranian journalist Kambiz Tavana.

"I'm happy to hear that Germans want to take a closer look at Iran, because the news coverage in the Western media is inadequate in many areas."

The journalist from Teheran is currently participating in a two-part CrossCulture internship in Germany. At the moment Tavana is working for the weekly newspaper "Die Zeit." Soon he will continue his internship at the "Deutsche Welle." By writing articles for renowned German editorial offices, Tavana is contributing to the intercultural dialogue in the media.

But not all exchange trainees place their emphasis on the social dimension. Sulaiman al-Shandoudi laughingly remarks that he "is not interested in politics." The young man from Oman hopes in the future for a heavier exchange of business and science students as well as teachers between his home country and Germany.

Contact with universities in the United States has suffered since the attacks of September 11. Consequently Europe has become the focus of more attention. Sulaiman al-Shandoudi has been working for the German Academic Exchange Service (DAAD) for nearly two months, the perfect place to advance his cause.

Syrian Koumay al-Mehem is also satisfied with his internship. He would like to initiate an interactive radio program in Damascus. He hopes to gain more technical and practical know-how from his job in a German media agency. When the young Syrian speaks, he seems to doubt that he will be correctly understood.

Hamza Alamoosh does not have any such doubts. After three years in Germany, the self-confident Jordanian is positive that he is in the right place with his qualifications.

The name "Herbert Quandt Foundation" is still difficult for him to pronounce, but he is absolutely sure he was rightly placed in the field of youth exchange. After all he is bringing relevant experience from his work at the Princess Basma Youth Resource Center in Amman.

As varied as the trainees, just as diverse are their reasons for participating in the program. Some hope to gain insights into another form of labor organization, to expand their professional "tools of the trade," and to acquire greater competence in intercultural dialog. Others are more motivated by their interest in social and political issues.

An interest in getting a closer look at political and social perspectives was the reason why Tabeal Leibbrandt finally decided to apply for a CrossCulture internship. The German scholar hopes that her work for the League of Arab States in Tunis will give her better insight into educational policies in the Arab world.

"We did not only learn about the Germany mentality," commented Hamza Alamoosh and Koumay al-Melhem. The workshop also taught them that there are many cultural differences between their Arab countries. "And Oman is yet another story," says Alamoosh and laughs.

Euro-Arab University Partnership
Strengthening Academic Ties between Emirates and Germany
The universities of Ajman and Erlangen recently signed a cooperation agreement. The agreement foresees an exchange of students and scholars, as well as the organization of academic conferences and joint research projects. By Florian Wagner

Afghan Universities
Starting from Scratch
One of the many things that need rebuilding in Afghanistan is university education for its future leaders. Since 2002 the German Academic Exchange Service has co-ordinated an aid programme by German universities. Sabine Ripperger reports

Student Exchange Program
Learning to Learn in Germany
After years of war and unrest, coming to Germany was like a dream for a group of Afghan students. They experienced a completely different type of school, learning with computers and experimenting with creativity. By Silke Bartlick