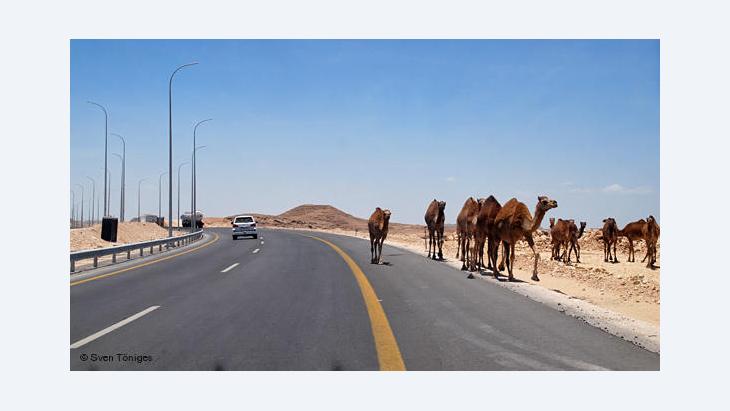 From Camels to Classics

﻿The Royal Opera House in Muscat, the first opera house on the Arabian Peninsula, is a symbol of the nature of the changes which have taken place in Oman. By Laura Weißmüller

You can't miss the new opera in Muscat: like a mighty fortress of shining white marble it rises right beside a multi-lane city freeway. As one drives past, even without slowing down, there's enough to see, with huge towers and extensive arcades which seem to stretch the opera house out in every direction. It's as if just the size of the building was supposed to underline the importance of classical music.

Perhaps it has to make its point with emphasis: the Royal Opera House, which is also a general purpose concert hall, is the first opera house on the Arabian Peninsula. And that's in spite of fact that the region has seen more building over the last few decades than anywhere else in the world, and Oman's neighbours, like Abu Dhabi, Dubai and Saudi Arabia, have been competing to see who can build the biggest and the best.

So far, they haven't tried an opera house: Western classical music has no tradition in the region, and traditional Arabic music doesn't have any opera.

Avoiding the pitfalls of schizophrenia

So this prestige object in Muscat might be a good way of telling the story of a country which just four decades ago was one of the least developed countries in the world and is now happy to be called an Arabian Switzerland: secure, prosperous and tidy. 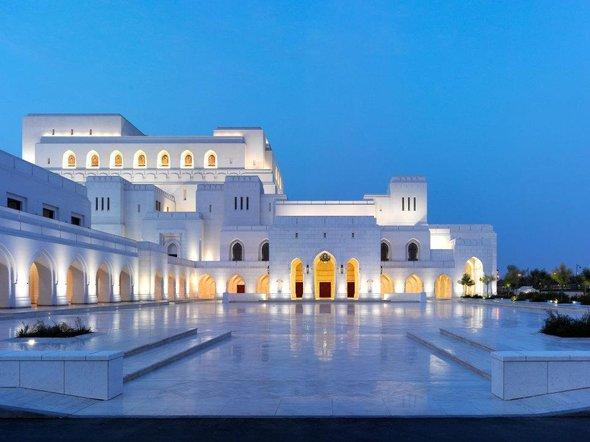 "The opera house also tells of how a country can try to be modern without losing its own tradition." - The Royal Opera House Muscat was officially opened on 12 October 2011. It is the first opera house on the Arabian Peninsula

​​The opera house also tells of how a country can try to be modern without losing its own tradition – a balancing act which only seldom succeeds, as one can see when one looks at the columned concrete monstrosities in Vietnam with their plastic crenellations, or at the serried ranks of skyscrapers in Oman's neighbours, Abu Dhabi and Dubai.

There's a certain amount of schizophrenia involved in this process, even if one has a vision of what one wants. And perhaps one ends up with a building which looks out of place not just on account of its size, but also because it seems to have lost any relationship to its surroundings.

When the current ruler, Sultan Qabus ibn Said Al Said overthrew his father in a palace revolution on 23rd July 1970 and seized the throne, he took over a country which had not yet seen much of the twentieth century. In a country the size of Italy, there were some ten kilometres of paved road, one hospital and three schools, none of which allowed girls. Few Omanis could read, and the infant mortality rate was high.

The new sultan's father had been suspicious of modern influence and had successfully protected his country from all that. The country's architecture was a demonstration of that fact: building codes required that all repairs and renovations were to be carried out in the original materials. Palm huts were usual along the coast, motor vehicles a rarity. 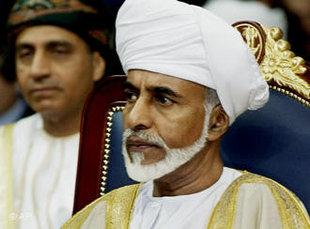 When Sultan Qabus ibn Said Al Said seized the throne from his father in 1970, there were three schools in the country, none of which allowed girls. Today, there are more women then men at university and emancipation is on its way

​​Wilfred Thesiger, the great English adventurer who travelled to the Arabian desert in the fifties to explore it by foot or on camel before it was taken over by multi-horsepower civilisation, would have had no need to hurry with Oman: the past remained the present until the seventies.

Sultan Qabus, born in 1940, studied administration in England, and, once he came to power, change came quickly. In 2008, the economics ministry was able to show off 58 hospitals and 933 health centres, polyclinics and doctors' offices. There were 1,300 schools and compulsory schooling, even for children in remote mountain villages. SUVs often have to serve as school busses. And this high level of schooling has led to a high intake at the new universities.

Outside the cities, women are still accustomed to stay in the background, but there are more women then men at university and emancipation is on its way.

Ten kilometres of road have turned into 23,000 – though drivers often have to manoeuvre their way through the mountains on rocky, steep roads which seem to have been gouged out of the landscape. Even the short distance from the government quarter in Old Muscat to the outer bay in the West can only be described as the high art of road construction.

The most astonishing thing about the Omani reconstruction is that, unlike Abu Dhabi or Dubai, Oman has rejected any modernisation which could be seen to be bringing Westernisation with it. Abu Dhabi may look as if it's been built using the ground plan of Manhattan Island, but there aren't even any skyscrapers – so far – in Muscat. While the towers of the emirates compete with the skylines of the world and are thus condemned to the international facelessness of mirrored glass, every new building in Oman has by law to be built in an Arab style. 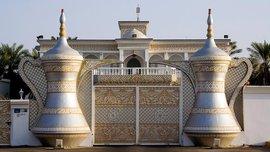 "Aesthetically indigestible mixture": In Oman, every new building in Oman has by law to be built in an Arab style. Pictured: A house with Ottoman-style coffee pot ornamentation

​​That can often produce an aesthetically indigestible mixture of wind towers, columns and horseshoe arches – and the opera house is no different – but the post-modern style puzzle is more than just a token: the country is trying to create itself anew with the means that it has. You could call it do-it-yourself modernism.

That costs money: Sultan Qabus has so far been able to pay for his modernisation with his country's oil. That's what also finances the country's living standard, with free health care and education for all. Oil accounts for almost 70 percent of state revenue.

Now that this is diminishing, Oman is looking to tourism. The people approve; whether it's the desert guide, the professor of journalism or the English teacher, they all are so full of praise for their sultan that a Westerner has to be sceptical. His youthful face with its soft lines is seen everywhere: on billboards, hanging from public buildings – but also on hand-painted posters, hung crooked in front of a small family home. That doesn't look like propaganda.

Mozart and Bach under the desert sun

All the same: the "Omani renaissance" which the sultan has announced and which he hopes to achieve with a large-scale educational strategy is his work. He is the sole source of power in the country. There are advisory councils, but in end, he's the one who decides – as with the opera house. The country has no relationship with Western classical music – under his father, every kind of music was frowned upon. But the sultan is a fan. 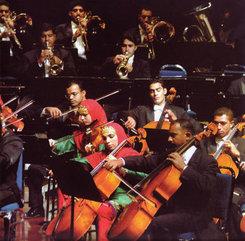 "Do-it-yourself modernism": The Royal Symphony Orchestra was trained in Oman. Many of its musicians are women

​​In the eighties he began to build up an orchestra – literally. Civil servants searched throughout the country for musically talented children, who were then taught by foreign teachers. Originally, the idea was to train them in Austria. But the danger was too great that they could lose their contact to their country, so the training was done at home.

The Royal Symphony Orchestra made its debut in the Al Bustan Palace, the sultanate's flagship building in the form of a fortress-like luxury hotel. In the early 2000s, the orchestra began to tour the Gulf region; in 2006 it appeared in Paris. A year later, it came to Berlin as part of the Young Euro Classic.

Those who were at that concert saw young musicians, many of them women, who were almost as excited by their pleasure in performing as the audience in the packed concert hall.

So is it all a success story? If you try to get a ticket for the Royal Opera House, you might believe that. Almost everything is sold out months in advance.

"There are waiting lists for evening concerts with hundreds of names," says Eman Rafay, the opera's young spokeswoman, as she shows visitors through the relatively small auditorium with its 1,100 seats. The upholstery, with its pattern of fiddles and musical notes, looks as if it was just made in a Mozart souvenir factory. The backs of the seats have a screen for the libretto. They've got those in New York and Vienna too. 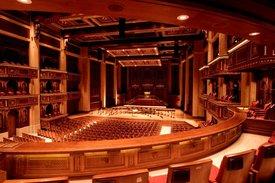 ​​The auditorium is wood-panelled and looks like a mix of Italian 19th-century opera house, American early-20th-century movie palace, and high-tech event location. It has top acoustics, and everything can be automatically raised and lowered, pulled out or pushed in.

Rafay says that rock concerts can be put on here as well. Rock concerts? In a country where they don't even have bars, except in the international hotels? "Can be," says Rafay, "not will be."

But even so, it's a colourful programme. They are just preparing for a visit from the jazz legend Wynton Marsalis. The house opened in October with Puccini's Turandot, directed by Franco Zeffirelli and starring Placido Domingo.

The Vienna Philharmonic begins the new season in January – there are no seats left, but the highly subsidised tickets are probably more popular with the foreign residents than with the natives. That may be why there was unusually strong opposition to the project, which cost several million euros. And the Grand Mufti of Oman declared that Muslims shouldn't visit places for music and dance. Even in Oman, modernity meets with resistance.

A short distance outside the city, directly on the same freeway, is the Grand Mosque. What they tried and failed to do with the opera house, they succeeded with here: to redefine modernity in Arab terms. And that makes it quite clear: the new buildings may lie on the highway, but the highway doesn't lead westwards – it leads to a modernity of its own.

Surging coronavirus cases in many parts of the world have overshadowed the start of this year's Muslim holy month of Ramadan, with festivities once again curtailed by contagion ... END_OF_DOCUMENT_TOKEN_TO_BE_REPLACED

The Prophet Muhammad never executed anyone for apostasy, nor encouraged his followers to do so. Nor is criminalising sacrilege based on Islam’s main sacred text, the Koran. In ... END_OF_DOCUMENT_TOKEN_TO_BE_REPLACED

As Qatar prepares to host the 2022 FIFA World Cup, the country has come under fire for its treatment of migrant workers, with some nations calling for a boycott of the contest. ... END_OF_DOCUMENT_TOKEN_TO_BE_REPLACED

Televised Turkish dramas are all the rage in the Middle East. A young Ottoman TV Empire has been expanding its soft power by harnessing regional dialects, Arabic names and viewers ... END_OF_DOCUMENT_TOKEN_TO_BE_REPLACED

German Middle East analyst Guido Steinberg and television journalist Ulrich Tilgner have both published new books on the conflicts in the Middle East. Their analyses and their ... END_OF_DOCUMENT_TOKEN_TO_BE_REPLACED

END_OF_DOCUMENT_TOKEN_TO_BE_REPLACED
Social media
and networks
Subscribe to our
newsletter