The flags have been flying over the respective embassies in Cairo and Tel Aviv for 30 years, but as far as culture is concerned there is as little sign as ever of any normalisation of relations between Egypt and Israel. Amira El Ahl takes a look at the problem from an Egyptian perspective

A small rebellion: a screening of the Israeli film "Aviva My Love" in the Israeli Academic Centre in Cairo

​​The sun is just setting over Cairo as the lights in the Israeli Academic Centre go out. The centre is located in a building on the banks of the Nile and the panoramic views over Cairo from its large picture windows are stunning.

This evening, however, the 15 guests – among them Egyptian students and journalists – are not here to look at the view. They have come to watch a film. "Aviva my love" is the story of a young Israeli woman and her desire to become a writer.

It has a straightforward, simple plot, but the fact that an Israeli film is being shown, here, in the middle of Cairo at all, is in itself quite an achievement – a kind of small, secret rebellion.

Cool relations between Egypt and Israel

Despite the two countries having signed a peace treaty on March 26 1979, cultural relations between Israel and Egypt have been cool for 30 years. At least they are on the Egyptian side.

In the 1980s, those involved in the Egyptian cultural sector drew up a set of directives intended to prevent all cultural exchange between the countries for as long as the Palestinians were denied their rights.

Since then, any writer, journalist or actor who decides to have any contact with Israelis is asking for trouble, even though there is no actual law that forbids this. Any offender, however, will find themselves facing expulsion from their professional association or union, and as a result, prohibited from working, and facing a certain end to their career. " 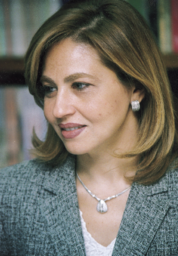 Hala Mustafa, chief editor of the "Democracy" magazine finds herself under investigation by the journalists' union as well as by the legal department of her own publishing house

​​The latest victim of the "anti-normalisation campaign" is the journalist Hala Mustafa. The chief editor of the state-run "Al-Ahram" publishing house's review magazine "Democracy" has found herself in hot water, and under attack from her colleagues, after conducting a one-hour interview with the Israeli ambassador in her office last month.

In the meantime, Hala Mustafa finds herself under investigation by the journalists' union as well as by the legal department of her own publishing house.

And this, despite the fact that before the meeting she had even obtained the approval of the head of publishing, Abdel-Moneim Said, a known advocate of normalisation with Israel and someone who has visited the country on many occasions. If a halt is not called to the investigations against her, Mustafa has told the press, "I will expose every journalist who works with Israelis or meets with Israeli officials."

That these contacts do exist is something that has been confirmed by Gabriel Rosenbaum, director of the Israeli Academic Centre in Cairo: "There are many more exceptions to their rules than they realise."

One writer, he said, had told him that the unions worked like the Mafia. "Anyone who refuses to tow the line and to keep their opinions to themselves is threatened." He personally knows many Egyptians who were against the boycott, but were put under massive pressure by their unions. 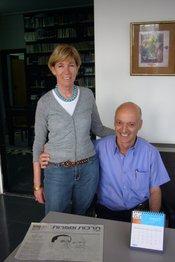 For Gabriel Rosenbaum, director of the Israeli Academic Centre, the continuing boycott of Israel and its culture by Egypt's intellectuals is incomprehensible

​​Amongst those put under such pressure was Amr Waked. Two years ago the up-and-coming actor found himself close to being expelled from the Egyptian actors' union. At the time the handsome blue-eyed actor, who had already made his mark alongside George Clooney in the Hollywood film "Syriana", was in Tunisia working on a British-American co-production.

The association officials objected to the fact that Waked and Israeli actor Yigal Naor had appeared together in a four-part documentary on the life of Saddam Hussein. At the time when he signed the contract, Waked claimed, he had been unaware that an Israeli was involved in the project.

Amr Waked was duly made to answer to a committee of enquiry, though the threatened expulsion was not carried out – a sign, perhaps, of a gradual softening of the hard-line attitudes.

For an outsider the boycott is in any case barely comprehensible. After all, the peace treaty between the two countries has brought close cooperation in other areas, such as agriculture, trade and security.

The respective flags have been flying over the embassies in Cairo and Tel Aviv for 30 years, but a cultural and academic centre such as the one set up by the Israelis on the banks of the Nile is still nowhere to be found in Tel Aviv.

The dilemma of Farouk Hosny

Farouk Hosny, Egyptian Minister of Culture for the past 22 years, has to take a substantial share of the blame for the situation. He has always made his opposition to normalisation of relations with Israel clear, a position which no doubt contributed to his losing out on the job as UNESCO Director-General at the end of September.

Those who opposed his candidacy accused Hosny of anti-Semitism after he had referred to Israeli culture as "inhuman" and stated last year that he would personally burn every Israeli book he found in an Egyptian library.

Farouk Hosny: "It was clear by the end of the competition that there was a conspiracy against me"

​​On his return from Paris the embittered culture minister responded to his failure to land the job by saying: "It was clear by the end of the competition that there was a conspiracy against me."

The minister's fury was directed against the American ambassador to UNESCO, the US government, and, above all, against the Zionist Jewish lobby that, he felt, was determined to stop him at all costs.

The Egyptian press, too, suspected a conspiracy against their minister and viewed the Jewish lobby and the Zionist media in Europe and the US as the main culprits.

In Al-Ahram Online Abdel-Moneim Said commented: "The world found it difficult to understand how Egypt could be at peace with Israel while its minister of culture thought otherwise, even if the paradox is perfectly understandable from the Egyptian perspective."

Said foresaw that Farouk Hosny had landed in a predicament that would cost him the highest UNESCO post.

For Gabriel Rosenbaum it is incomprehensible why Egyptian intellectuals continue to boycott Israel and its culture. "Anti-normalisation is bad for Egypt and a problem," says the 61-year-old university professor for modern Egyptian language and literature at the Hebrew University of Jerusalem.

A lack of cultural exchange also brings a lack of understanding of others. Gabriel Rosenbaum has known the country, where he has been living and working for the last three years, for over twenty years. He speaks Arabic fluently and has many Egyptian friends. "I love it here. I love the country and its people."

But he also knows the precarious situation his friends and the guests who regularly come to lectures and films at the Israeli Academic Centre are in. So he has decided not to invite any artists or writers until the problem has been solved. "I don't want to get anyone into any difficulties."

However he would like to see more contact between Israeli and Egyptian intellectuals. "When they get together at talks in the centre and begin exchanging ideas and opinions it creates a wonderful atmosphere through the entire Middle East," enthuses Rosenbaum. There is only one topic that is very much off the agenda. Politics has no place in discussions at the centre.

Amira El Ahl spent two years in Cairo as foreign correspondent for Der Spiegel magazine. She has been a freelance reporter in the Middle East since 2008.

Farouk Hosny and the UNESCO Director-General Election
Leitmotif Opportunism
As a representative of an authoritarian regime, the Egyptian minister of culture Farouk Hosny would never have made a suitable head of UNESCO. Yet rather than finding a better Arab candidate to lend the dialogue between cultures a new lease of life, most states took an opportunist stance. Stephan Roll comments

"The Band's Visit"
An Israeli-Egyptian Utopia
In the Israeli film "The Band's Visit", an Egyptian police orchestra plays the starring role. Despite this, the film has not been shown in Egypt and Abu Dhabi. Kristina Bergmann has seen the comedy about the common ground shared by very different people

Daniel Barenboim in Cairo
The Obstinacy of Hatred
A row over the conductor Daniel Barenboim shows how irrationally some Arabs behave towards Israel, says Tomas Avenarius in his commentary

END_OF_DOCUMENT_TOKEN_TO_BE_REPLACED
Social media
and networks
Subscribe to our
newsletter