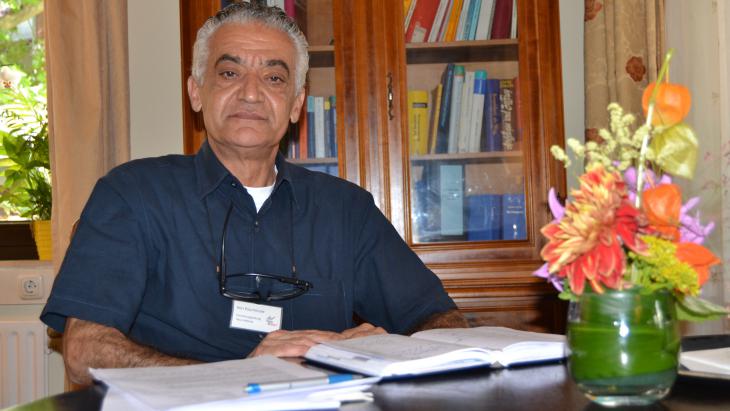 A number of German retirement homes have discovered that the cultural diversity of their residents and staff is a bonus: people from a number of different cultures can live and work together very happily under one roof. Annalena Junggeburth visited the Haus Andreas retirement home, which is run by the Clarenbachwerk social welfare service in Cologne

Close to 60 years have passed since the first "guest workers" from Turkey, Italy and Portugal came to Germany. In most cases, their families followed them to Germany after a few years. Although many of them initially thought they would return to their native countries after a stint in Germany, many have remained to this day. The main reasons for this decision were primarily financial. However, the fact that there were no longer any family members left at home to take of the elderly generation has also proved to be a crucial consideration.

This is why it is all the more important for the elderly immigrant generation to experience a little bit of home in this, their adopted country. Some have found just what they are looking for at a retirement home in Cologne. The residents of Haus Andreas have a daily routine that lets them enjoy not only their own culture, but also a diverse range of other cultures. This is due not only to the residents' own cultural background, but also to the fact that the care and nursing staff come from a variety of different cultures.

Mohammed Pourmirzaie, the Iranian-born director of Haus Andreas, explains how the concept of culturally sensitive elderly care is implemented in the home. "We already had the space and the human resources. Close to 70 per cent of our care staff are immigrants themselves and come from a variety of cultural backgrounds. Fourteen different languages are spoken here and we have people from many different nationalities under one roof." 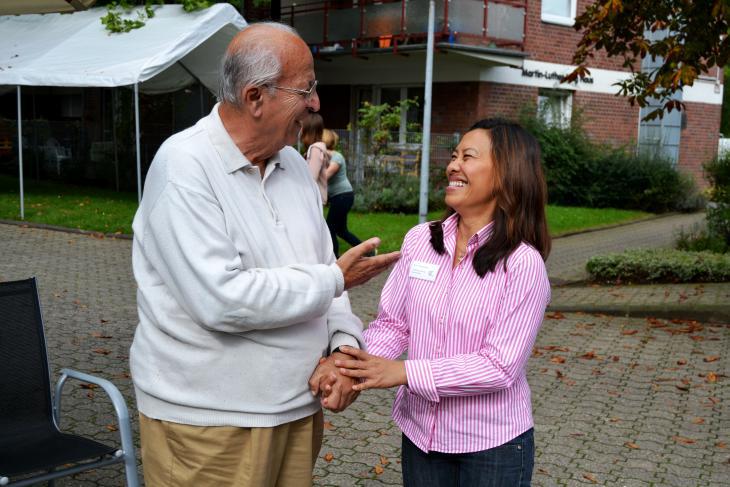 Home from home: Dr Davud Moschiri, a former doctor in Cologne, was born in Iran and came to Germany to study medicine. He says that the fact that he can live in a home like Haus Andreas, with its diverse cultural atmosphere, is absolutely invaluable. He reserves his greatest praise for the home's staff, many of whom, like Thai-born house manager Narumon Phokphoon, have a migrant background

Basmati rice instead of Uncle Ben's

To begin with, formerly unused space in the home was transformed into a Christian chapel and a prayer room for Muslims.

The idea to adapt the food on the home's menu came from a former Indian-born resident, who asked "Why are we always served Uncle Ben's rice?" The management quickly found a replacement that satisfied the tastes of all residents. The choice of long grain Basmati rice was particularly welcomed by the Iranian, Indian and Pakistani residents of the home.

In addition to pork, Haus Andreas offers a rich variety of meals, including the choice of beef, fish or chicken. Asked whether the meals are "halal", Pourmirzaie stresses that the home steers clear of such matters. "We want to prevent any single cultural or religious practice from dominating."

Despite the largely positive response to the home's concept, not all culture-related difficulties can be so easily overcome. Taking care of the elderly at home within the family environment still remains a strong tradition, particularly among those with an Eastern cultural background. This poses a challenge for the younger generation, who, faced with the time constraints of work and raising their own children, find themselves pushed to the limits of their capabilities. The shame of placing their parents in a home for the elderly can be great. In many cases, there is the fear of disparaging comments and disdain from relatives.

In addition, elderly immigrants and their families often experience anxieties concerning language barriers, care that is incorrect in the context of their religion, or the failure of such facilities to accommodate cultural practices. The team at Haus Andreas is able to address such inhibitions or biases with intercultural openness.

Here, it is a matter of course that Muslim women are attended to exclusively by female care staff. They equally ensure that Muslims can choose Friday as their bath day and that Turkish residents can be rubbed down with a towel after their bath just like in a hammam. 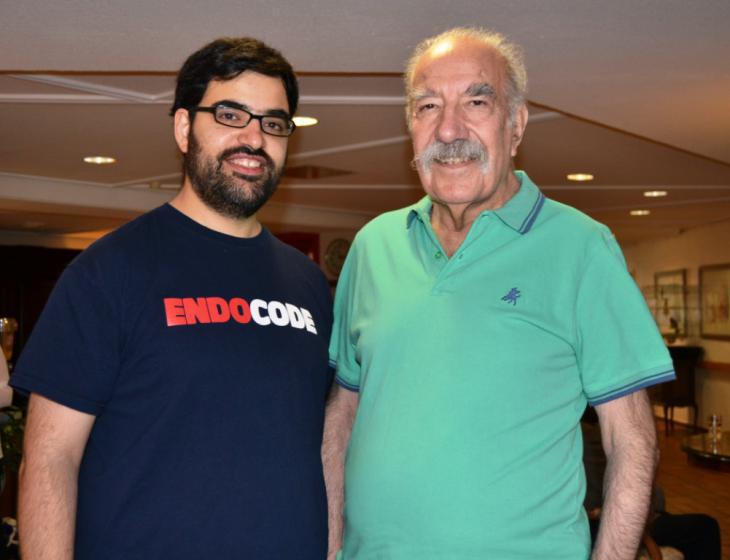 Although the Iranian writer Fereidoon Tonokraboni (right) has been living in Germany since 1983, he can barely speak the language. For this reason, it was a relief and a delight for him to know that Haus Andreas, where he has been living for several months now, also has Persian-speaking staff. His son Keywan (left) is also delighted that his father feels at home and doesn't have to struggle with the language

Culture-based conflicts are rare at the home. All residents prosper from the diversity on offer, whether it be the food, the activities or the special festivities. In addition to Easter, the residents of Haus Andreas celebrate the Persian and Kurdish Nowruz festival marking the beginning of spring. The yearly summer festival features themed buffets offering residents the chance to broaden their culinary horizons.

Without a doubt, the home director's migrant background and his many years of experience have proved to be an asset for the residents. "It certainly is a benefit!" says Pourmirzaie. "For example, I meet family members of immigrant residents who know little about German laws. They have questions concerning care and financing and they are afraid of not being taken seriously as German citizens. I come from abroad myself, which allows me to build up a relationship of trust with them; I can help them to make their way through the maze of German bureaucracy."

For many Iranian immigrants, moving into a residence for the elderly is at least the second time in their lives that they have been uprooted. "They are often only brought to Germany by their children when they have reached retirement age," says Pourmirzaie. "Once here, they live with their families for a few years, enjoy the company of their grandchildren, and can treasure the feeling of security found within the family, something that they had to do without in Iran. Yet, when they eventually require care, they once again have to pack their belongings and move into a home for the elderly."

This is why it is all the more comforting for families and their elderly loved ones when a retirement home has no problem when its residents bring their culture with them. In this way, the distant homeland feels just a little bit closer.

Home
Print
Newsletter
More on this topic
The "Muslim Associations as Community Activists" project: Open dialogue on thorny issuesYoung Muslims in Germany: Forget, but don't forgetMuslim boy and girl scouts in Germany: A commitment to peaceful coexistence
Related Topics
Dialogue of Cultures | Intercultural Dialogue, Integration in Germany, Islam and the West, Islam in Germany, Muslims in the West
All Topics

After the al-Qaida terrorist network attacked the US on 11 September 2001, Germany backed the US-led military and diplomatic mission in Afghanistan – and still does. Nineteen ... END_OF_DOCUMENT_TOKEN_TO_BE_REPLACED

When hundreds of thousands of refugees crossed Germany's borders in 2015, Chancellor Angela Merkel promised: "We can do it!" This is the story of how Iraqi refugee Raisan Hameed ... END_OF_DOCUMENT_TOKEN_TO_BE_REPLACED

In the first case of its kind anywhere in the world, a German court is probing Syria's state torture system. Giving testimony at the trial is one of Syria's most widely respected ... END_OF_DOCUMENT_TOKEN_TO_BE_REPLACED

Five years ago, as hundreds of thousands of refugees came to Germany, Chancellor Angela Merkel maintained: "We can do it." How has Germany – and those who sought asylum – managed ... END_OF_DOCUMENT_TOKEN_TO_BE_REPLACED

Five years ago, Samer Serawan spent many long, cold nights in a muddy courtyard in Berlin, one of many Syrians who queued up to live in Germany. Now he has a successful restaurant ... END_OF_DOCUMENT_TOKEN_TO_BE_REPLACED
Author:
Annalena Junggeburth
Date:
Mail:
Send via mail

END_OF_DOCUMENT_TOKEN_TO_BE_REPLACED
Social media
and networks
Subscribe to our
newsletter