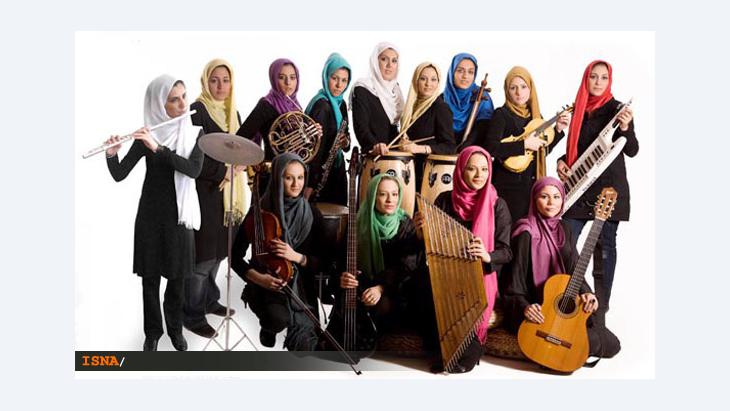 Culture in Iran
Music in Rouhani′s Iran: A change in tune?

During President Rouhani′s first term in office, musicians began to gain greater freedom in Iran. Now, they′re hoping for further alleviations for their work after Rouhani′s re-election. To date, however, musical performances have been subject to much uncertainty and even traditional religious music is a thorn in the side of hardliners. By Nahid Fallahi

Scholars of Islamic law disagree on how to judge music and that controversy is reflected in Iranian politics. While moderate and reform-oriented forces close to the president allow concerts, the hardliners try to prevent musical performances through all means at their disposal. Yet they too know that the Iranians don′t want to go without music – so they use it for their own purposes wherever possible.

″The Ahmadinejad era was a big shock for Iranian music,″ admits composer Karen Keyhani. ″The state broadcaster still takes a negative stance towards music. At the same time, any musical activity in Iran is related to major uncertainties due to the sustained restrictions. ″ Iran′s state broadcasting company is dominated by ultra-conservatives.

Restrictions, disruptions or even bans of concerts have become a matter of course in Iran, Keyhani regrets. ″There are groupings who won′t even tolerate religious songs by Mohammad-Reza Shajarian, the maestro of traditional vocals.″ No wonder then that many Iranian musicians have turned their backs on the country over the past few years. Keyhani himself has performed in various countries such as Switzerland, Italy and the USA.

The chairman of the Iranian non-governmental organisation Khaneye Moussighi (House of Music), which represents musicians′ interests in the country, described the situation in an interview with the ILNA news agency in early June: ″When it comes to music, it′s as though we′re living in a feudal country. Someone is constantly flexing their muscles and acting as they please. It not only threatens artists′ existence, it taxes their mental health.″

Women are not allowed to sing in public in front of men. Their voices would sexually arouse men, the ayatollahs believe. Their only option to perform is as background singers or in choirs. Officially, they are permitted to sing to female audiences. But more and more cities are banning women from performing at all, either as singers or instrumentalists.

In mid-July, Baran Rezai from the band Sheyda told the ILNA news agency that women were only able to perform in two cities, Tehran and Sanandaj. No other Iranian town has let female musicians perform on stage in recent times.

In 2014, Iranian news sites reported that women musicians were no longer allowed to perform in public in 13 provinces. It is not known who prompted this ban. According to the then deputy minister of culture, Pirouz Ardjmand, who was responsible for music, the Rouhani government had nothing to do with it. ″If women artists take part in an event along with men, dressed in line with the regulations and observing the religious and societal rules, there are no concerns about them performing on stage,″ Ardjmand stated.

In April of this year, he announced that the government had not cancelled any concerts over the past four years, during Rouhani′s first term in office. Ardjmand commented that 3000 concerts took place across Iran in 2015. According to representatives of the current government, the ministry of culture permitted only 400 concerts under Mahmoud Ahmadinejad (2005 – 2013).

Karen Keyhanfar too sees small but important changes under Rouhani′s regime. ″The national orchestra has resumed its work. There are more graduates in music. The dark days for classical music seem to be coming to an end. Shahdad Rouhani is conducting the Tehran Symphony Orchestra, the oldest in the Middle East, which was closed down under Ahmadinejad.″

He continues: ″The highest-ranking decision-maker on music issues in the ministry of culture knows the field. More concerts are being permitted and instrumental classical music no longer needs official permission for performances. There have been tangible improvements in the management of the music schools, which suffered in quality terms under Ahmadinejad.″

The situation has also improved slightly for banned underground music, it would appear. According to Pirouz Arjmand, the Rouhani government is attempting to relax policy here, too. ″For the first time since the revolution, their songs and music videos have been permitted. That means underground musicians can now present their music officially,″ says Arjmand.

After Hassan Rouhani′s re-election, hope is growing that the situation will improve further for music and its creators. The choice of his new minister of culture will show whether that hope has a real foundation. Will the moderate Rouhani even manage to let female solo singers perform for mixed audiences? Much remains to be seen.

Sufis today are under attack from fundamentalists and modernists alike. At the same time, a new form of Sufism is emerging in the West. By Marian Brehmer END_OF_DOCUMENT_TOKEN_TO_BE_REPLACED

Short movies nominated for an Oscar often don't get wide public attention. But when one is about an Iranian girl seeking freedom from male domination by taking off her veil, ... END_OF_DOCUMENT_TOKEN_TO_BE_REPLACED

World-famous Iranian film director Jafar Panahi has been incarcerated for several months, even though Iran's Supreme Court overturned the verdict against him. Now, he has gone on ... END_OF_DOCUMENT_TOKEN_TO_BE_REPLACED

Young women are driving forward the protests against the Iranian regime, which have been going on for months. Literature provides clues as to why that should be, and why the ... END_OF_DOCUMENT_TOKEN_TO_BE_REPLACED

Visiting the country of her parents, murdered by the Iranian regime in 1998, German-Iranian artist Parastou Forouhar finds a changed society: hopeful, strong and courageous, ... END_OF_DOCUMENT_TOKEN_TO_BE_REPLACED

END_OF_DOCUMENT_TOKEN_TO_BE_REPLACED
Social media
and networks
Subscribe to our
newsletter