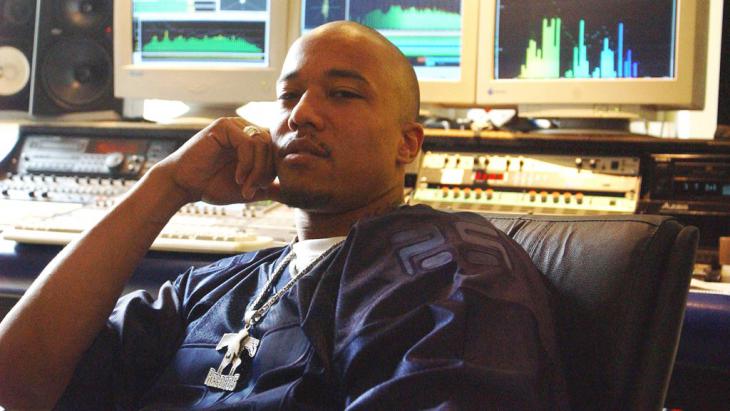 Cuspert the IS terrorist
Mortal dreams of paradise

In 2004, Denis Cuspert was still the Berlin rapper "Deso Dogg". Radicalised by the Salafist scene in Germany, he then joined IS, fighting for three years under the name Abu Talha al-Almani. Now reports are circulating claiming Cuspert has been killed. By Katja Riedel

Shortly before Denis Mamadou Gerhard Cuspert left Germany heading for Egypt and Syria, he was seen sitting in a bus, wearing a grey hooded sweater and a black cap.The black bag slung across his shoulder bore the word "alqaida" and the image of a plane flying into the famous three-stripe logo of a certain sports clothing manufacturer.

The German public channel ZDF broadcast the last authentic images of the terrorist-to-be on German soil; propaganda videos and threatening messages are all that have since appeared. "Merkel, Foreign Minister," he would say later, in agitating fashion. "You are conducting jihad in our countries. We will bring it to your countries."

This would not be the last, and certainly not the most brutal message that Cuspert regularly sent – initially back home, and later directed at the world as a whole.

For over a week now, there have been an increasing number of indications that Denis Cuspert, perhaps the highest-ranking German within the terror organisation Islamic State (IS), is probably no longer alive.

Not just supporters of IS, but also some within the opposition movement, such as the activists from "Rakka is Slaughtered Silently" are reporting that Cuspert was killed in an air attack by the anti-IS coalition on 16 October, two days before his 40th birthday.

Cuspert's pick-up was targeted by a bomb dropped by anti-IS coalition planes as it travelled along the road between the IS capital Raqqa and Tabqah in Syria. It is thought he died in the attack together with a fighter named Abu Othman-al Libi. 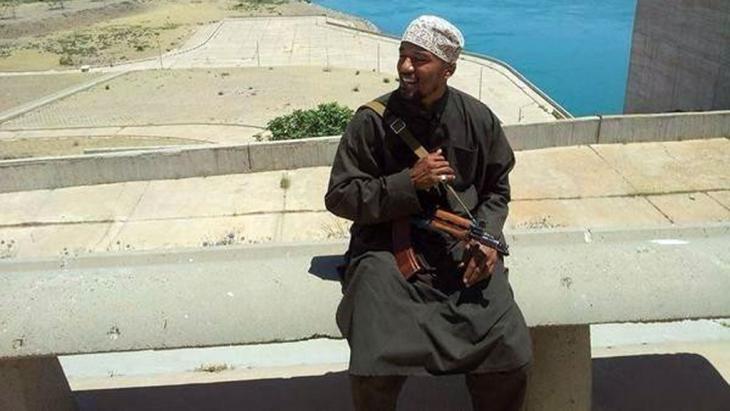 On the US list of "specially designated global terrorists": Cuspert, formerly the rapper "Deso Dogg" from Berlin, took a nom de guerre in June 2012 to become Abu Talha al-Almani, or The German Abu Talha

There has nevertheless been no official confirmation from the terror militia. Some uncertainty still remains, therefore, particularly as this is not the first time that Cuspert has been reported dead. By his own account, he suffered a serious head injury in the autumn of last year; images were posted in social media showing a purportedly dead Cuspert lying on a stretcher, his face deathly pale. But then, at the beginning of the year, new propaganda videos emerged showing Cuspert very much alive and apparently in a more brutal frame of mind than ever.

The US added him to its list of "specially designated global terrorists" in February this year. The reason for this was a video from the autumn of 2014, in which he is seen placing the head of a corpse on the body of the murdered man. In another video made at an oil field close to the city of Homs, he can be seen apparently desecrating corpses, the bodies of people in civilian clothing who had been shot dead.

Cuspert, who is the ex-rapper "Deso Dogg" from Berlin, took a nom de guerre in June 2012: Abu Talha al-Almani, or The German Abu Talha. The radical Salafist preacher, who co-led the now-banned organisation Millatu, became a terrorist and a fighter. The intelligence community soon ascribed him contact with the leadership of IS.

It is alleged that he swore an oath of allegiance to the self-styled Caliph Abu-Bakr al-Baghdadi in early 2014. Cuspert became the face of the German jihad. And he also became that particular kind of propaganda weapon used by terrorists to lure youngsters out of their bedrooms and into the conflict zones – a route attractively presented as the path to achieve the personal ascent willed by God.

Cuspert's own story is presented as evidence of how this can be done. He was a loser and a small-time criminal. As a Salafist and IS-terrorist however, he was taken seriously – as a threat to domestic security and as an enemy of the entire West. 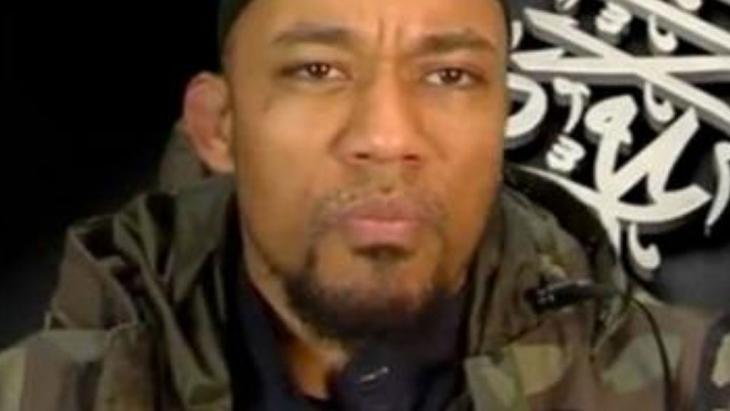 Loser and small time criminal: Cuspert finally found the recognition he craved as an enemy of the entire Western world, content to be used as a poster boy to lure youngsters out of their bedrooms and into the conflict zones.

The Berlin Office for the Protection of the Constitution devotes a 25-page "situation report" to his messed up life. At last, what he says and sings is taken very seriously. In his messages, Cuspert repeatedly speaks of the yearning for death. Of wanting to die for Allah, to take others with him, to reach paradise as a martyr, to Jannah.

In 2013 he posted the battle song "al -Jannah al-Jannah" online: I want to die and can't wait for it, armed with bombs and grenades, (...) in the barracks of the crusaders, push the button, al-Jannah, al-Jannah". In his videos Cuspert has a hard face and piercing eyes, there is definitely something fascinating about him. Just like his nashids, the battle songs only sung by male voices; the Salafist faith regards instrumental music as haram, or sin. The nashids accompany the jihadists into battle.

In 2011 Arid U. also listened to the music of Abu Maleeq, before he was shot dead by two Americans at Frankfurt airport. Cuspert used that name at a time when he had already begun identifying with a radical interpretation of Islam that he propagated all over Germany, in the Salafist preacher milieu, also as part of the Koran distribution campaign "Lies!“ Now, he was no longer "Deso Dogg", the outlaw posing in front of flash cars.

His youth in the Berlin Kreuzberg neigbourhood brought him the Araber Boys street gang. It also put him in jail, for theft, weapons, violence and drugs, most recently in 2004. The boy was no idiot, on the contrary. But he was an angry, radical individual. "The final option was only violence and emotion/in the school yard I was just the little nigga boy/with ripped jeans, an evil eye and a cheeky tongue" – are the lyrics of Cuspert's rap: "Who's afraid of the black man", from a time when his songs had a sinister tone.

Like many who went on to became terrorists, Cuspert's family background was a broken one; he later started his own broken family, and had at least two sons in Germany. His father, a Ghanaian, is alleged to have left the family when Denis was small. There were apparently problems with his stepfather, a US citizen. He found his ersatz parents in the big rap stars and the kids on the street. In 2008, he had a car accident. Denis suffered a head injury; he battled with the consequences for months.

And from then on he changed dramatically. Many who knew him view the accident as a kind of awakening. By 2010 at the latest, Denis Cuspert was regularly attending the Al-Nur mosque in Berlin. There, he also met the person who would finally lead him to the Salafist scene. It was the convert Pierre Vogel, a hate preacher who believes he is a prince of peace. A video shows the two men deep in conversation. They exchanged telephone numbers, Cuspert said he was often in the Rhineland where Vogel lives. It was to become a close connection.

Only a short time later, Cuspert would start speaking in harsh tones, he sat in front of a Lies! poster and said that sharia is the medicine "against democracy, integration, against this Western ideology". All that's left is jihad. "I'll do that until I die." Death, his own and that of others as the purpose of a difficult life. Evidently, that life is now over.

Home
Print
Newsletter
More on this topic
The image policy of IS: Terror in the spotlight Recruitment strategies used by Islamic State: A mutation of religionThe genesis of Islamic State: A new chapter in the decline of the Arab world
Related Topics
'Islamic State' | IS, Islam in Germany, Radicalisation, Salafis | Salafism, Sharia, U.S. policy in the Middle East
All Topics

Following the recent brutal attack on Salman Rushdie, famous writers have been reading passages from his works. Torsten Landsberg takes a look at the struggle in 1988 to publish " ... END_OF_DOCUMENT_TOKEN_TO_BE_REPLACED

Iranian artist Parastou Forouhar has lived in Germany since 1991. Full of rage, just like the protesters, she hasn't yet given up on the idea of justice. By Julia Hitz END_OF_DOCUMENT_TOKEN_TO_BE_REPLACED

Unflattering terms were used at a German Football Association human rights congress aimed at "intensifying the discussion" ahead of the World Cup. One speaker in particular made ... END_OF_DOCUMENT_TOKEN_TO_BE_REPLACED

Fariduddin Attar’s "The Conference of the Birds", one of the seminal works of Islamic mysticism, has recently been published in sumptuously illustrated German translation. It ... END_OF_DOCUMENT_TOKEN_TO_BE_REPLACED

Egyptian authorities have Mada Masr in their sights once again after critical reporting. But the editor of the country's last independent news source is adamant they will continue ... END_OF_DOCUMENT_TOKEN_TO_BE_REPLACED
Author:
Katja Riedel
Date:
Mail:
Send via mail

END_OF_DOCUMENT_TOKEN_TO_BE_REPLACED
Social media
and networks
Subscribe to our
newsletter