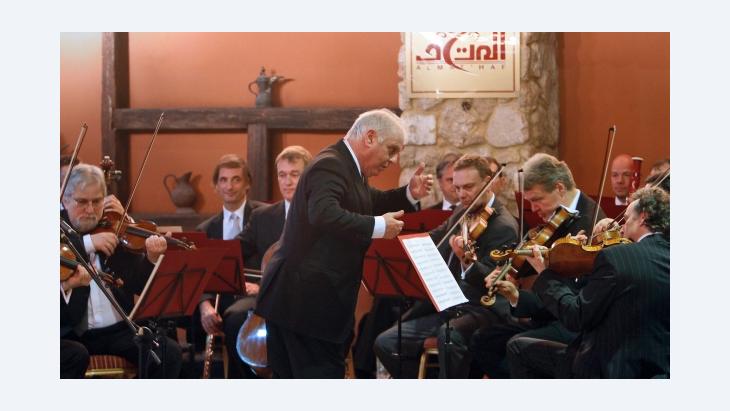 ﻿The Israeli star conductor and pianist Daniel Barenboim and his West-Eastern Divan Orchestra were invited to perform in Qatar. Then, following pressure from Arab opponents of a normalisation of relations with Israel, the invitation was withdrawn. As far as the Jordanian author Fakhri Saleh is concerned, this is evidence of political naivety

﻿Once again, one of the many campaigns that is opposed to a normalisation of relations between Arabs and Israel has overshot the mark. This time, the campaign in question has hit the Israeli musician Daniel Barenboim, who is well-known around the world for his courageous views on the Palestinian question and the occupation of territories in 1967, views that place him firmly in the camp of those who oppose both occupation and the right wing that has dominated Israeli politics for decades.

The Israeli star conductor and pianist was initially invited to perform with his West-Eastern Divan Orchestra at the Music and Dialogue Festival in Qatar. However, following pressure from opponents of normalisation, the invitation was later withdrawn. This incident makes the effectiveness and value of such campaigns in getting the Israeli government to change its policy towards the Palestinians look questionable.

That being said, the criteria that are used to select the institutions and people that end up being victimised by such campaigns look no less questionable.

The most unsuitable target imaginable 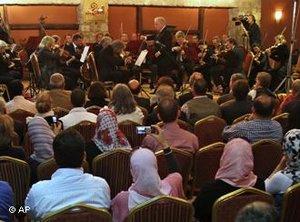 Barenboim in Gaza, May 2011: "In view of his stance on the Palestinian question, his sympathy and solidarity with the suffering of the Palestinian people, Barenboim is a most unsuitable target for all this uproar," writes Fakri Saleh

​​These occasional outbursts – which occur, for example, when an Israeli academic visits an Arab university, or an Israeli writer attends a cultural event that is being held outside the Arab world but is also being attended by Arabs – are hardly preventing a normalisation of relations between Israel and the Arab world in a different area, namely in trade and business.

The reason being that trade and business is booming between Israel and both those Arab countries that have already concluded a peace treaty with it and those that have not.

What's more, these countries know fine well that Israeli products are finding their way into their countries via middlemen of other nationalities and are flooding their markets; they just couldn't care less about it.

Nevertheless, these very countries go along with the call to prevent an apparent normalisation of relations by withdrawing an invitation issued to a renowned artist of Daniel Barenboim's standing. The same Daniel Barenboim who is not only an Israeli citizen, but an Argentine citizen too and was even given honorary Palestinian citizenship by Palestinian President Yasser Arafat in recognition of his stance on the Palestinian question and his untiring efforts in support of the Palestinians' right to have their own state within the 1967 borders!

What makes the whole situation even more ludicrous is that it was Barenboim's stance on the Palestinian question that made him a target of campaigns organised by the Israeli right wing, campaigns that saw members of the Knesset demanding that his Israeli citizenship be withdrawn if he considered accepting Palestinian citizenship and dismissing him as an anti-Semite and a Jew-hater.

﻿﻿Gaining closure so as to live in the present

This gives the anti-normalisation withdrawal of the invitation a really bitter aftertaste, especially as Barenboim has been a guest in Ramallah both as a pianist and a conductor on several occasions. 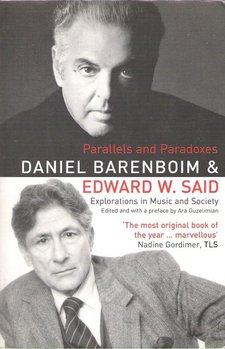 Closing with the past in order to be able to live in the present: Edward Said, the Christian Arab from Jerusalem, and Daniel Barenboim, the Israeli Jew from Argentina published "Parallels and Paradoxes" in 2002

​​In 2011, he even secretly organised a benefit concert in conjunction with the United Nations where members of the most famous symphony orchestras in the world came together as the "Gaza Orchestra" to play Mozart.

In view of his stance on the Palestinian question, his sympathy and solidarity with the suffering of the Palestinian people and his belief in the necessity of finding a truly creative solution to the Israeli-Palestinian conflict, Barenboim is a most unsuitable target for all this uproar, which is built solely on the objection that the famous conductor is an Israeli citizen.

In an article about Barenboim and Wagner in an appendix to the book Parallels and Paradoxes, Edward Said analysed Barenboim's daring attempt to perform Wagner's works in Israel starting in 2001 and wrote that he shared one of Barenboim's views, namely that it is essential to close with the past in order to be able to live in the present.

Said felt that the confusing and agitating pressure exerted by the past on the present is holding entire peoples captive in a hysteria of collective pain that refuses to forget. For this reason, Barenboim's clear differentiation between Wagner the man and Wagner the composer has to be seen indirectly as an attempt to heal the wounds caused by the Holocaust, an attempt to break out of the insistence to live in the past.

One can conclude that Said was encouraging the Palestinians to take a similar course in order to leave painful memories behind them and to set up a practical and concrete programme of cultural policy that would allow them to push through their issue as a matter of world conscience, similar to the way South Africa did.

In Said's opinion, the anti-normalisation campaigns are futile, wasted efforts that do not help the Palestinians either politically or culturally because they focus exclusively on the Arab world and lose sight of the fact that we are living in a much larger world and in a politically more dynamic environment that is much more significant for the Palestinian-Israeli conflict too.

Amid strong controversy, Daniel Barenboim conducted Wagner, a professed anti-Semite, in Israel in 2001. "Barenboim's clear differentiation between Wagner the man and Wagner the composer has to be seen indirectly as an attempt to heal the wounds caused by the Holocaust, an attempt to break out of the insistence to live in the past," writes Saleh

​​According to Said, it would undoubtedly make more sense to get Israeli intellectuals and politicians who sympathise with the Palestinians on board instead of scaring them off and refusing to deal with them, simply because they are Israelis; in the same way as the ANC's campaign under Nelson Mandela only began to bear fruit when white South African academics and politicians joined, which allowed them to work together with their black colleagues on the organisation of global anti-Apartheid campaigns, which ultimately led to the toppling of the apartheid regime in South Africa.

And this, says Said, is just what the Palestinians need, not Don Quixote-style campaigns against imaginary enemies that flare up once in a while in the form of totally uncoordinated, senseless spontaneous reactions, only to peter out and flame up again sometime in the future.

Fakhri Saleh is a literary scholar and cultural editor at the Jordanian daily newspaper Ad Dustour. He is also chairman of the Association of Jordanian critics. His most recent publication was Before Naguib Mahfouz and After: Studies of the Arabic Novel.

The Palestinian militant organisation Hamas, with Hezbollah's help, is building up a military presence in Lebanon, the ultimate consequences of which could be devastating, writes ... END_OF_DOCUMENT_TOKEN_TO_BE_REPLACED

In this essay, renowned Lebanese journalist and writer Hazem Saghieh asks whether the Arab Levant, which stretches from Iraq in the east to Egypt in the west, will remain an ... END_OF_DOCUMENT_TOKEN_TO_BE_REPLACED

By 2050, the Middle East and North Africa could be dealing with many more elderly people suffering from dementia. A lack of facilities, specialists and local knowledge means the ... END_OF_DOCUMENT_TOKEN_TO_BE_REPLACED

For many years, world-famous conductor Zubin Mehta has worked tirelessly to strengthen relations between Arabs and Jews, sponsoring projects such as "Road to Recovery", which is ... END_OF_DOCUMENT_TOKEN_TO_BE_REPLACED

Fifty-five years after Israel began occupying Palestinian lands, it is more difficult than ever to imagine a way out. The seeds of the two-state solution that were planted by ... END_OF_DOCUMENT_TOKEN_TO_BE_REPLACED

Yazan Khalili is spokesman for The Question of Funding, a collective of artists taking part in the leading German contemporary art festival Documenta 15. Here, he responds to ... END_OF_DOCUMENT_TOKEN_TO_BE_REPLACED
Author:
Fakhri Saleh
Date:
Mail:
Send via mail

END_OF_DOCUMENT_TOKEN_TO_BE_REPLACED
Social media
and networks
Subscribe to our
newsletter