Musical Diplomacy in the Middle East

​​There are no two ways about it: Daniel Barenboim is a very, very busy artist. The 62-year-old star composer, who was born in Argentina and grew up in Israel, is the leader of not one, but two orchestras: he is both General Music Director of the Deutsche Staatsoper in Berlin and Director of the Chicago Symphony Orchestra. Married with children, Barenboim has also written several books and articles and is always on tour.

He is not only a brilliant pianist, but also speaks seven languages, including Hebrew. On top of all this, Barenboim is a tireless advocate of cultural dialogue between Palestinians and Israelis in the Middle East.

Together with his recently-deceased friend, the Palestinian writer and literary scientist Edward Said, Barenboim founded the Israeli-Palestinian music workshop "West-Eastern Divan" in the late 1990s. The project, which was named after Goethe's eponymous collection of poems, is more than just a music initiative: the primary aim was to show that Arabs and Israelis can live and work together peacefully.

The initiative fosters young talent by providing scholarships and organising an annual workshop lasting several weeks in Andalusia. This workshop is not only about music lessons, it is also about providing an opportunity for discussions in which the various viewpoints of the Arab-Israeli conflict can be exchanged.

At the end of the workshop, the musicians go on tour with their orchestra to show how different cultures can work together. They do not just play in the world's major cities. The Andalusian, Israeli, and Arab musicians have also played in the occupied Palestinian territories. The orchestra also played its first concert in an Arab country in August 2003 when it performed in the Moroccan capital Rabat.

Involvement on behalf of the Middle East

For this unusual peace project, Barenboim and Said were presented with the prestigious Prince of Asturia Award for International Relations in 2002. Sadly, Edward Said passed away last year. Nevertheless, Barenboim is continuing his work on his friend's behalf.

Since Said's death he has created an even greater platform for his music dialogue work: in the summer of 2004, the conductor joined forces with the regional government of Andalusia to set up the Barenboim-Said Foundation, a foundation that seeks to support projects that foster talented young musicians from Israel and the Arab world other than the aforementioned "West-Eastern Divan".

It is no coincidence that the foundation is based in the Spanish city of Seville. Most of the funding for the project comes from the Andalusian regional government, which hopes the project will help promote peace between the cultures. After all, Christians, Jews, and Muslims have been living peacefully side by side in Andalusia for many years now.

The foundation has set itself a large number of goals for fostering young musical talent. Among other things, it hopes to found an academy for orchestral studies that will complement the studies of Andalusian music students. It also hopes to set up an audio-visual library containing not only the works of Daniel Barenboim and Edward Said, but also works and compositions by other authors and composers who have dedicated their lives to promoting peace and raising humanitarian awareness. 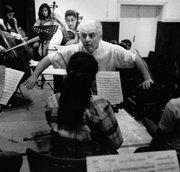 ​​The foundation will also fund various music projects in the Middle East, and in the Palestinian autonomous territories in particular. The aim for all these projects is to teach dialogue, understanding, and respect. A five-year plan for building up an infrastructure for music lessons is also in the pipeline.

In organisations like the Edward Said National Conservatory of Music, with which the foundation co-operates in the autonomous territories, professional musicians teach children and young people from the refugee camps. The goal is to extend this program so that children in Jenin, Nablus, Al-Khalil (Hebron) and Gaza have access to music lessons.

Five musicians from Berlin are already teaching in these projects and the foundation is currently scouring Germany for other qualified music teachers and teachers with a knowledge of Arabic.

In addition to a youth orchestra, the Barenboim-Said Foundation also founded the first musical kindergarten in Ramallah. The kindergarten was named after Edward Said. According to Barenboim, music lessons play a more important role in this kindergarten than anywhere else in the world because every hour-long music lesson for a child or young person means one hour less violence in their lives. Most of the children come from the refugee camps AmAri and Qadura. In addition to regular classes, the five-year-olds also take classes in music, art, and theatre.

In this way, Barenboim gives young musicians opportunities they would not otherwise have been given. Barenboim himself was lucky: his talent was discovered at an early age by the famous conductor and composer Wilhelm Furtwängler.

When asked why he gives his time to music projects in particular, Barenboim is always quick to answer that everyone should become active in the area to which they are most suited. "Music is my way and as a musician, I am fighting against two things: noisy music and silence!"

Barenboim regularly receives awards for his exemplary work for peace. He was recently presented with the Paul Hindemith Award for Art and Humanity. Barenboim not only raises his baton to conduct orchestras, he sometimes uses these awards to rap politicians on the knuckles.

In May 2004, for example, he caused outrage in the parliament in Jerusalem when he used a ceremony marking the presentation of the Wolf Award to criticise Israel's policy of occupying the autonomous territories. After the death of Yassir Arafat, the Israeli conductor called on Europe to get more heavily involved in the conflict in the Middle East. "If Europe does not bring peace to the Middle East now, the Middle East will bring violence to Europe," he recently wrote in an article in the German daily newspaper Die Welt.