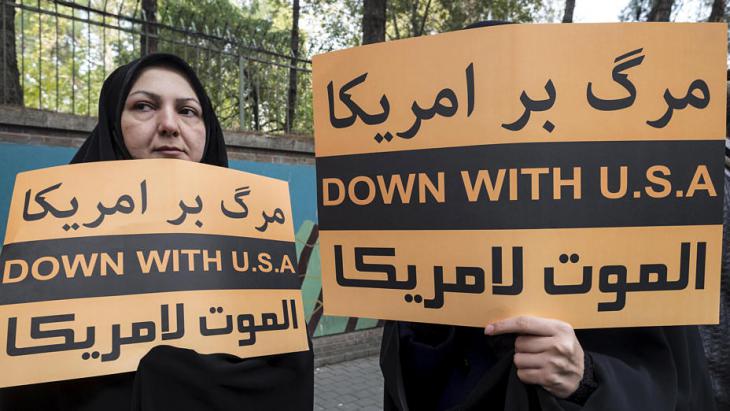 Trump gifts the hawks of Tehran

By pulling out of the nuclear deal with Iran, U.S. President Donald Trump has played into the hands of Tehranʹs hardliners. Iranian President Hassan Rouhani is now under pressure to salvage the agreement with its European signatories and prevent an escalation in the region. Commentary by Ulrich von Schwerin

Things couldn't have turned out any better for the hardliners in Iran. By nixing the international nuclear deal, Donald Trump has made it clear to the world that the U.S. cannot be trusted and that it was a mistake to ever enter into negotiations with Washington. Even President Hassan Rouhani, who invested his entire political capital in the deal and whose political strategy to date has been based on seeking reconciliation with the West, has had to concede that the U.S. is not a reliable partner.

It still remains to be seen just how hard the reinstatement of U.S. economic and trade sanctions will hit the Iranian economy, but what is already evident is that the Trump move has discredited the idea of a rapprochement – or any kind of negotiations – in Iran in the long term.  No Iranian politician is going to want to advocate talks with the U.S. in the foreseeable future, after Trump has so clearly demonstrated that an agreement with the U.S. is not worth the paper it's written on.

Since Trump took office in January 2017, it had become increasingly difficult for Rouhani to convince the Iranians of the advantages of the nuclear deal. This is because persistent threats from the U.S. President to pull out of the agreement created such uncertainty that major European companies and banks were afraid to invest in Iran, particularly as the U.S. continued to impose new sanctions on Tehran in response to its missile programme and regional policies.

This made it increasingly clear to Rouhani that his strategy – that of seeking reconciliation with the West and thereby injecting new impetus into the nation's economy – was not going to pay off.  Resistance to a rapprochement with Tehran was great even before Trump came along, all the more so because hardliners in Iran persistently thwarted Rouhani's cautious policy of openness with their repressive domestic policies and their aggressive stance on international affairs. 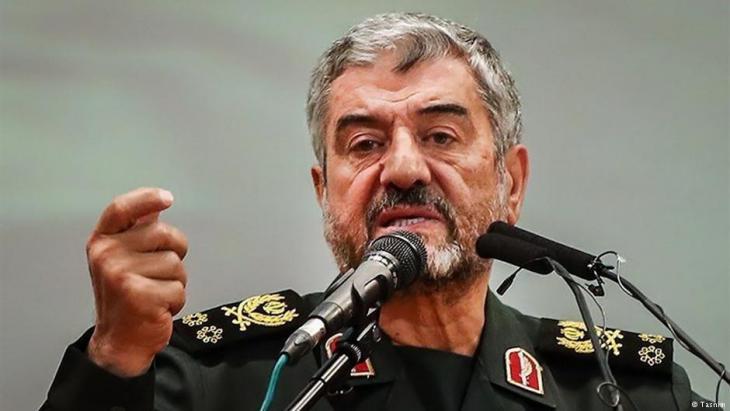 Hawks in the ascendant: following Americaʹs withdrawal of the nuclear agreement, the head of Iranʹs highly influential Revolutionary Guard Corps regards the fate of the JCPOA as sealed. European ties with the United States are too close for the former to reach an independent decision, commented Major General Mohammad Ali Jafari in interview with the Iranian news agency "Fars News"

For the hawks in the Revolutionary Guard Corps and the influential religious foundations, the nuclear deal was an aberration from the outset. In their view, the West cannot be trusted and therefore any attempt at co-operation is doomed to fail. For them, Iran's salvation lies in its military might and economic self-sufficiency – especially as the empire of companies they control has thus far existed perfectly well with and from the economic and trade sanctions.

No deal without "solid guarantees"

Following the U.S. withdrawal, Rouhani now intends to salvage the nuclear deal with the other signatories. Supreme Leader Ali Khamenei has agreed to hold talks with Germany, France, Britain, Russia and China, but made no secret of the fact that he views the outcome with scepticism. Without "solid guarantees" from the Europeans, he warned, Iran will not be able to remain in the nuclear pact.

For hawks such as the Commander of the Revolutionary Guard Corps Mohammad Ali Jafari, the talks are a waste of time. He is instead calling for the continued upgrading of the armed forces. Parliamentary Speaker Ali Larijani, who has thus far supported the Rouhani line, says the Americans only understand the "language of force". General Chief of Staff Mohammed Bagheri wants Iran to "stand on its own two feet" instead of trying to save the nuclear deal.

Rouhani has been left with little time to prove that the equation of trade relations against the renunciation of uranium enrichment can still be realised. This will crucially depend on whether the Europeans are able to protect their companies from U.S. sanctions when doing business with Iran. But this will not be possible without a confrontation with the U.S. and it is uncertain whether EU countries will risk this conflict.

In any case, the Europeans would be well advised to concentrate on maintaining the nuclear deal. French President Emmanuel Macron’s initiative to expand the deal with further treaties made more sense than trying to convince Trump to remain in the agreement. But in the current situation there can be little hope of motivating the Iranians to make further concessions in their missile programme or regional policies. 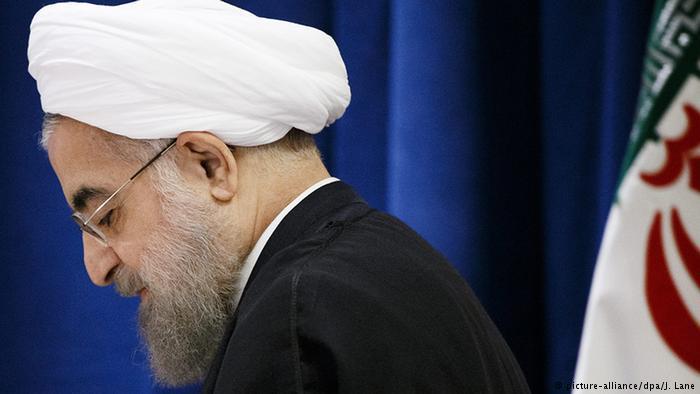 Under pressure to act: "Rouhani has been left with little time to prove that the equation of trade relations against the renunciation of uranium enrichment can still be realised. This will crucially depend on whether the Europeans are able to protect their companies from U.S. sanctions when doing business with Iran," writes Ulrich von Schwerin

Ali Khamenei still supports Rouhani's attempt at salvaging the deal, but if the talks don't yield rapid results and the Europeans are neither willing nor able to provide concrete guarantees for the preservation of the agreement, the Supreme Leader will also back away from it. This will give rise to the ominous prospect of a resumption in uranium enrichment as well as an escalation of the power struggle in the region.

The hawks within the Revolutionary Guard Corps are already urging the nation to take a tougher line on the international stage. In Syria, we are already seeing the threat of an escalation of the conflict with Israel, which has recently acted with increasing aggression against Iran's efforts to obtain a foothold in Israel's neighbour to the north. Just one day after Trump's pull-out from the nuclear deal, the Israeli air force carried out large-scale raids on Iranian targets in Syria, in response to what it says were Iranian missile attacks on the Golan Heights from Syria.

This means Trump's exit from the nuclear agreement threatens to bring about the exact opposite of what he actually set out to achieve. Instead of stemming Iranian influence in the region, Trump's decision could result in Iran defending its interests in Syria, Iraq and Lebanon with yet more aggressive fervour, while at the same time bolstering military aid to Houthi rebels in Yemen. This would ultimately result in an exacerbation of the military confrontation.

It appears doubtful whether there is still some scope for preventing such an escalation. Israel and Saudi Arabia are led by firebrands who have for a long time pursued a hard line against Iran. Trump has surrounded himself with hawks who make no secret of the fact that they would prefer to see a regime change in Tehran. And in Iran, the hardliners are biding their time, waiting for their moment to topple Rouhani and reposition the nation's course. The region is bracing for volatile times ahead.

A law is currently being debated in Morocco that would legalise the cultivation and export of medicinal cannabis. For many small farmers, this would bring considerable advantages ... END_OF_DOCUMENT_TOKEN_TO_BE_REPLACED

Recep Tayyip Erdogan, disappointed by the European Union’s reluctance to integrate Turkey into its ranks, has re-directed his country’s diplomacy toward the Maghreb and Africa to ... END_OF_DOCUMENT_TOKEN_TO_BE_REPLACED

Philosopher Juergen Habermas was due to be awarded a major Arab prize in Abu Dhabi, but has turned it down following criticism. This decision torpedoes Arab efforts at a ... END_OF_DOCUMENT_TOKEN_TO_BE_REPLACED

Although a unity government was formed in Libya in March 2021, tensions and possible crises between the political actors are already emerging. What problems does the country face ... END_OF_DOCUMENT_TOKEN_TO_BE_REPLACED

Among Muslims, the image of women as "cossetted hijab-wearing princesses" is frequently invoked. But Muslim women have long wanted to be more. In her essay, Karoline Roscher- ... END_OF_DOCUMENT_TOKEN_TO_BE_REPLACED

Even in times of war and pandemic, refugees are still being deported to Afghanistan. Several deportation flights have taken place in recent weeks alone. Since those affected often ... END_OF_DOCUMENT_TOKEN_TO_BE_REPLACED
Author:
Ulrich von Schwerin
Date:
Mail:
Send via mail

END_OF_DOCUMENT_TOKEN_TO_BE_REPLACED
Social media
and networks
Subscribe to our
newsletter