Skip to main content
"Death and the Maiden" in Iraq

From Pinochet to Saddam Hussein

The themes of torture, guilt and vengeance under Chile's military junta are at the heart of Ariel Dorfman's play "Death and the Maiden". Now a Berlin theatre group has been performing the play, premiered in 1991, in Iraq. Antje C. Hobucher und Eduardo Fernández-Tenllado reflect on the experience

​​Persecution and torture at the time of the military dictatorship in Chile and how one comes to terms with their consequences and with ideas of retribution are the central themes of Ariel Dorfman's play "Death and the Maiden". These issues are explored in the play through the story of Mr and Mrs Salas, and a doctor named Miranda. Paulina Salas, the wife, was herself a victim of kidnapping and torture during the dictatorship. After her release, she had returned home to find her boyfriend in the arms of another woman. Their marriage went ahead nevertheless.

Some years later we find Paulina still suffering the trauma of her time in captivity and because of this unable to pursue her medical studies. Husband Gerardo, meanwhile, has become a distinguished lawyer. Returning home from an appointment one day his car gets a flat tyre, leaving him stranded on a country road. A stranger comes to his assistance and the pair get into conversation. Gerardo invites the stranger to come home with him.

They arrive just in time to hear a radio announcement about Gerardo's appointment to a commission of enquiry intended to help the country deal with its past and with the cases of death brought about through torture. 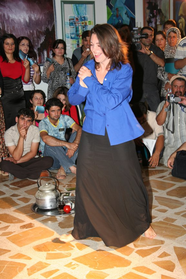 The performance of the Austrian artist Ulrike Düregger marked the opening of the festival; the various theatre productions were performed in the days that followed

​​The stranger congratulates Gerardo. But as he, Paulina and the stranger (Dr. Miranda) celebrate the news together, Paulina recognizes the visitor as the man she believes to have been responsible for her torture. The doctor, from being an overnight guest, now becomes a hostage. Paulina takes him prisoner and wants to put him on trial. He should get to know what it feels like to be tortured and raped. Gerardo is horrified. Dr Miranda denies that he had anything to do with what happened to Paulina.

Questions of guilt and retribution become imbued with a fierce, urgent intensity as they are played out compellingly between the three characters. Can the perpetrators of such crimes and their victims continue to live alongside one another after a dictatorship has ended? What alternatives are there? Should victims seek revenge, take the law into their own hands, or should they try to find justice through courts and the legal system? Does anyone remain free of guilt in a dictatorship? There are no easy answers to such questions. But it is exactly these sorts of questions which are currently of such burning importance to the people of Iraq.

A sense of optimism

We were delighted to be given the opportunity of performing in northern Iraq. We were not without misgivings, of course – reports coming out of the country are not exactly confidence inspiring. Hardly a week goes by without reports of kidnappings, suicide bombings, civil war and other horrors. Our parents, relatives and friends were worried too, of course. The only one who was able to reassure us was Ihsan Othmann, our Iraqi director.

​​But the more we found out about the actual situation, the more positive it seemed to be. The area under the authority of the northern Iraq regional government was, we were told, considerably more stable than other parts of the country. Nevertheless, it was only after seeing things for ourselves, after spending a few days in Dohuk, that we began to feel reassured.

We had barely crossed the border before we discovered the warmth of the local welcome. The heartiness, openness and curiosity of the people we encountered throughout our travels moved us very much. The sense of optimism we found in the towns and cities we visited was also very heartening.

The festival – the real reason for our trip – began on June 29th with the opening of an exhibition. Along with the paintings of one hundred Kurdish artists, four different productions of the play were put on in three languages. There was a performance version by the Austrian artist Ulrike Düregger as well as versions by the Shorashvan company from Dohuk, in Kurdish, by the National Theatre group of Baghdad, who did an Arabic version, and ours, the I.O. Theater Berlin, in German. 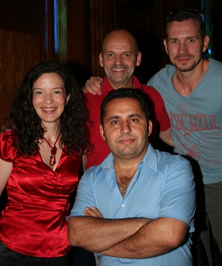 ​​The performances took place on three successive evenings and were accessible to a wide cross-section of the public. Each performance was followed by public discussion sessions that proved to be tremendously popular. In particular, it was the various interpretations given to the character of Paulina Salas that brought plenty of lively and animated discussion.

There was such a tremendous response that, after the festival finished, we were invited to give a performance at the Institute of Fine Arts in Sulaimaniyya by the city governor.

We really have come to love this region and its people. The amount of cultural exchange that takes place helps to build much-needed bridges between East and West as well as enriching the lives of everyone involved. So we are really looking forward now to other festivals coming up in Berlin and Erbil (Iraq), in the autumn.

I.O. Theater Berlin was set up in June 2005 by the Iraqi director Ihsan Othmann and the actress Antje C. Hobucher. The company brings together artist from many different nations and cultures – its full name is "Internationales Offenes Theater Berlin" (International Open Theater Berlin). The performances in Iraq came about via the Berlin Festival "Iraqi Theatre at Home and Away" which took place for the second time in March this year and was organised by Theaterhaus Mitte, the Berlin "Förderband" cultural association and I.O. Theater.

END_OF_DOCUMENT_TOKEN_TO_BE_REPLACED
Social media
and networks
Subscribe to our
newsletter