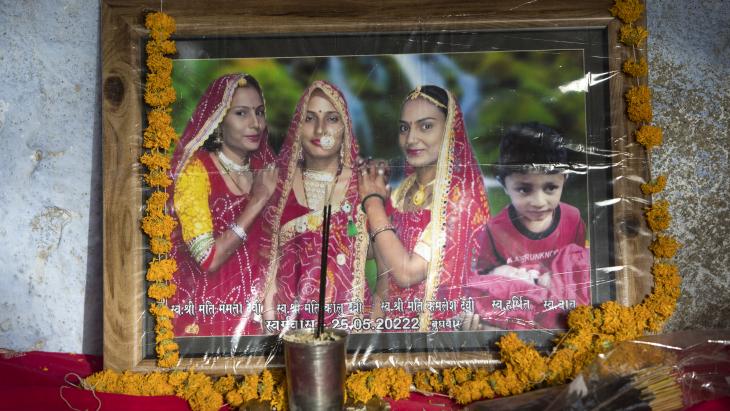 Before the three sisters and their children were found dead in a well, they left a message blaming the family they had married into.

Kalu, Kamlesh and Mamta Meena were victims of a dispute over dowries, the often hefty sums Indian parents pay to marry off their daughters.

The sisters had wed brothers from the same household and lived under the same roof, but suffered constant violence from their husbands and in-laws, according to the trio's grieving relatives.

They were abused constantly, they say, including when their father failed to meet demands for more money.

All three were found dead last month near their marital home, a village on the outskirts of Jaipur, along with Kalu's four-year-old son and infant child. Both Kamlesh and Mamta were pregnant.

"We don't wish to die but death is better than their abuse," read a message on WhatsApp left by one of the sisters after their disappearance, a cousin said. "Our in-laws are the reason behind our deaths. We are dying together because it's better than dying every day."

Authorities are investigating and currently treating the deaths as suicides, a senior police officer in Jaipur revealed.

The sisters' distraught father, Sardar Meena, said life had been a living hell for his daughters, whose husbands banned them from pursuing their education and constantly harassed them for more payments.

"We had already given them so many things, you can see them in their home," he said, counting off the beds, television sets and refrigerator he provided to the family. "I am the father of six girls, there is a limit to how much I can give," added Sardar, who earns a meagre income as a farmer.

"I had educated them and just doing that was difficult."

Police have arrested the three husbands, their mother and a sister-in-law on charges of dowry harassment and spousal abuse. Attempts to contact the men's family were unsuccessful.

India outlawed the practice of paying dowries more than 60 years ago, and harassment or extortion over the payments is a criminal offence. But the custom persists, particularly in rural areas, underpinned by social conventions that treat women as an economic burden and demand compensation for accepting them as brides.

Last year, a man in the southern state of Kerala was jailed for life after using venomous snakes to murder his wife and take sole control of their property, which included a new car and 500,000 rupees ($6,500) provided by her family as dowry.

Courts have also been punitive in their treatment of dowry harassment, last month jailing a man in Kerala for 10 years after his payment demands were blamed for driving his wife to suicide.

A pervasive taboo around divorce – only one in 100 Indian marriages end in dissolution – has kept married women from contemplating escape from abusive situations.

For the Meena sisters, leaving was never seen as an option, even though their relatives were aware of the violence.

"Once they were married, we thought they should remain in their marital homes, to maintain the dignity of the family," Sardar said. "If we had gotten them remarried in another home, and if that situation turned out to be worse, then what will we do? We'll lose face."

India's National Crime Records Bureau recorded nearly 7,000 dowry-related killings in 2020 – around 19 women every day. The same agency reported that more than 1,700 women killed themselves that year over "dowry-related issues".

Both figures are dependent on reports to police, and experts say the actual number of cases is much higher, as with other data on family violence. "In an hour, some 30 to 40 women are victims of domestic violence... and these are just documented (cases), so it must be much more than that," said Kavita Srivastava, an activist with India's People's Union for Civil Liberties.

Srivastava said the dowry dispute involving the Meena sisters was just one part of their tormentors' efforts to control their lives and restrict their independence.

The fundamental cause, she added, was a widespread social acceptance of domestic violence in India that leaves women feeling trapped in oppressive and violent relationships.

"If even one woman has to kill herself because her marital life seems like the end of the road," she said, "I feel the Indian state has failed for those women."    (AFP)

END_OF_DOCUMENT_TOKEN_TO_BE_REPLACED
Social media
and networks
Subscribe to our
newsletter