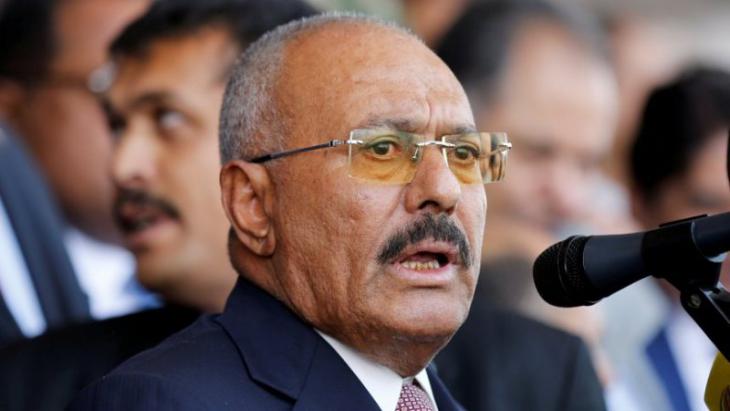 For a week, Ali Abdullah Saleh, the former long-time ruler of Yemen fought against his erstwhile Houthi alliance partners for control of the capital Sanaa – then suddenly he was dead. By Karim El-Gawhary

Laid out on a brightly-coloured woollen blanket, Shia Houthi fighters presented the corpse of the former Yemeni dictator Ali Abdullah Saleh. There was a gaping wound in the side of his head. "Praise be to God!" they cried. The chaotic video scenes that spread like wildfire via the Internet on Monday afternoon were vaguely reminiscent of the demise of the Libyan dictator Muammar Gaddafi.

A short time later the Houthi interior minister announced the death of Saleh, who had been trying to leave the capital Sanaa by a car that had evidently been ambushed. The minister said Saleh had been killed by a sniper. This marks a new intensification of the dramatic fighting around Sanaa. Saleh's house in the centre of the city had previously been bombed.

These events were preceded by six days of bloody clashes for control of the Yemeni capital.  Since the end of last week, Houthi militias had been trying, with tanks and heavy artillery, to win back positions occupied by troops and supporters of the former president Saleh. This is because just over a week ago, the decommissioned and now-deceased dictator broke with his erstwhile allies and renounced the Houthi militias.

Marked out for elimination

This drew yet another conflict line in a war that has now been raging for more than three years. Whereas previously, the Houthis and Abdullah Saleh fought together against the Saudi-dominated military alliance and controlled large areas in the north of the country, now the former allies began opening up a new front amongst themselves. 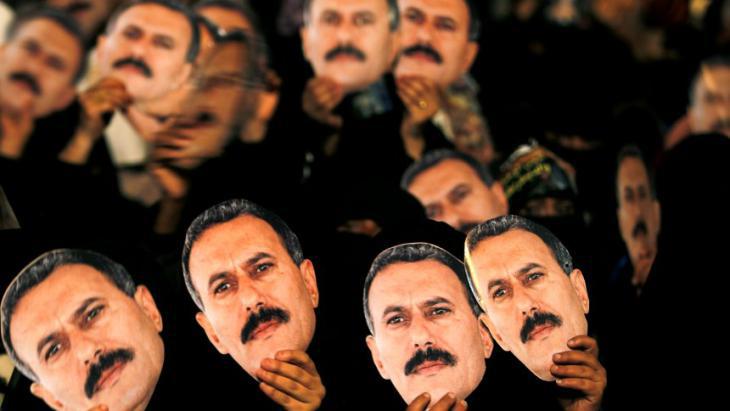 The many faces of Ali Abdullah Saleh: Yemen′s former dictator held power until the Arab Spring uprisings, yet continued to play an important role in the aftermath. Initially he allied himself with the Houthi rebels, because they too were opposed to the internationally recognised Yemeni premier Abd-Rabbu Mansur Hadi. Yet a rift between the parties developed over territorial rivalries, which included the capital Sanaa. Last Wednesday the conflict escalated to such a degree that the former allies resorted to open fighting. Saleh′s final tactic – breaking with the Houthi rebels to approach the Saudis – was to cost the 75 year-old his life

Naturally, both sides have differing accounts of the events of recent days. Last weekend on television, Abdullah Saleh spoke of a long-overdue uprising against the Houthis and announced his intention to open a new chapter and begin talks with the neighbouring Saudis. A Houthi spokesman however described this as a coup, essentially marking Saleh out for elimination. Saleh then received air support from his former Saudi opponents, who hoped this new conflict phase would stem the influence of Iran, which backs the Houthis.

The Saudis had taken a big risk by inciting Saleh to break with the Houthis and pledging him military support. Now they have lost. It is still unclear how all this will affect the course of the conflict. If the Houthis triumph in Sanaa, this could certainly result in a large-scale retaliation campaign against all those who sided with Saleh. But it is also feasible that the Saudis will now escalate the war and together with their Yemeni partners, that they will try to bring about a military showdown in Sanaa.

Whatever happens, the residents of Sanaa should be braced for the worst. Reports of the night before the death of Saleh described it almost without exception as the worst of their lives so far. And this in a city that has been stricken by war and its humanitarian consequences for years. 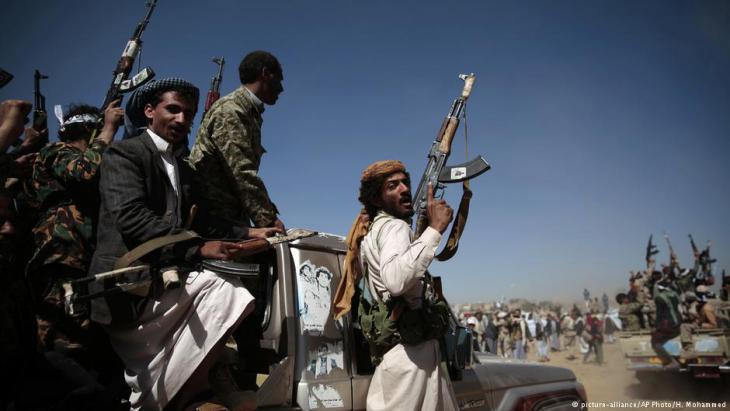 From allies to rivals: in the past the Houthis and Saleh′s supporters fought side by side against the troops of the internationally recognised government. Together they controlled huge swathes of Yemen. Yet in recent days cracks began to appear in the alliance. Saleh declared himself open to entering talks with the Yemeni government. The latter is supported by a Saudi-led armed coalition, which has flown airstrikes against the Houthis and their allies since early 2015

First, the residents of Sanaa were told more than three years ago that Shia Houthi rebels from the north had captured their city, after the now-deceased Yemeni dictator Ali Abdullah Saleh and his clan were refusing to relinquish power in the wake of the Arab Spring rebellions. Since neighbour Saudi Arabia entered the conflict two-and-a-half years ago, the city has been regularly bombed by the Saudi air force.

But in recent days, even for the long-suffering residents of Sanaa, the war attained a new intensity. In the early hours of Monday, one such citizen tweeted: "As someone who has experienced both in the past, the street battles in Aden and the air attacks in Sanaa, I can say that for civilians, the street battles are the greater evil. But to experience both at the same time is the worst thing that can happen to anyone."

Even before all this, the war has been bitter and merciless – with more than 10,000 people dead so far, two million people forced to leave their homes and 17 million people threatened with famine, cholera and diphtheria as a consequence of the conflict. But the new round of fighting in Sanaa marks a new climax that could also bring about some movement in the war, which has been gridlocked for years.

UN Secretary General Antonio Guterres has now called on all warring factions in Yemen to halt air and ground attacks. Ambulances and medical staff are no longer able to reach the injured, people can no longer leave their homes to buy food and other necessaries, he explained.

According to the International Red Cross, its staff are currently too afraid to be out in the open. The organisation reports that hundreds of injured people have been brought into the hospitals of Sanaa in recent days, and that these clinics lack both medication and space, as well as being dogged by continual power outages.

On Friday, Iranians head to the polls to elect a new president. What's at stake in this presidential election? Sanam Shantyaei explains. END_OF_DOCUMENT_TOKEN_TO_BE_REPLACED

For centuries, the great classical Persian author Hafez has inspired German writers. Translations, adaptions and homages have been created in his wake, and the process continues ... END_OF_DOCUMENT_TOKEN_TO_BE_REPLACED

In the run up to Iran’s presidential election, Supreme Leader Ayatollah Ali Khamenei has sought to entrench his power. Alex Vatanka asks whether a sharp slump in voter turnout ... END_OF_DOCUMENT_TOKEN_TO_BE_REPLACED

Turkey's parliamentary and presidential elections are scheduled for June 2023. But they are already casting a shadow. While the opposition is calling for early elections, ... END_OF_DOCUMENT_TOKEN_TO_BE_REPLACED

Despite promises to the contrary, the social and economic situation in Iran deteriorated under President Rouhani, prompting two nationwide revolts in recent years. Yet the social ... END_OF_DOCUMENT_TOKEN_TO_BE_REPLACED
Author:
Karim El-Gawhary
Date:
Mail:
Send via mail

END_OF_DOCUMENT_TOKEN_TO_BE_REPLACED
Social media
and networks
Subscribe to our
newsletter