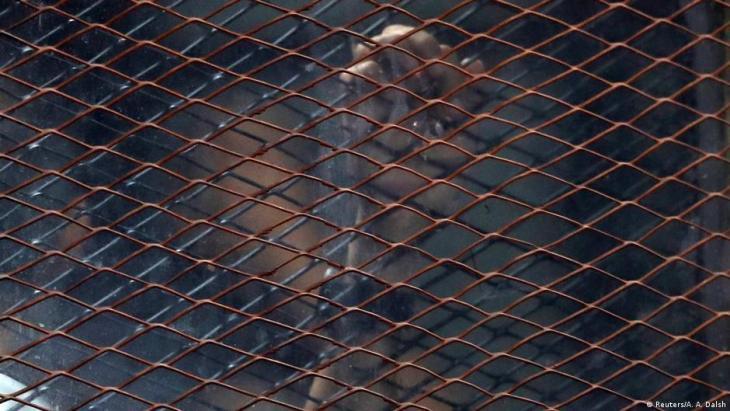 Attracting little attention from the world at large, Egypt's military regime has been mercilessly going after dissidents. Now, the first executions of prominent members of the Muslim Brotherhood loom. All the while, the true extent of the crackdown remains unknown. By Jannis Hagmann

The last time Omar had a chance to speak to his relative Osama Yaseen was in the courtroom. Yaseen, a well-known member of the Muslim Brotherhood in Egypt and a former minister, sat in a glass cage during the proceedings. But on that day in March 2018, the guards briefly unlocked the door so that the two could exchange condolences. Omar's grandmother had passed away.

Now another of Omar's relatives is doomed to die, for Osama has been given a death sentence. "They treat him like an animal, like a rat," says the Egyptian, who is living in exile and whose name has been changed here for his safety. He can't understand how the government can execute a former minister. "Osama has done great things for the country. How can he suddenly be declared a terrorist overnight?"

Osama Yaseen was minister of youth under Egypt's Islamist ex-president Mohammed Morsi. The fact that he sat in the same cabinet as the current president, Abdul Fattah al-Sisi, from 2012 to 2013, gives the whole story a touch of tragicomedy. Sisi was defence minister before he took over as head of state with the help of the military, ousting Morsi, Egypt's first freely elected president after the 2011 revolution.

Ever since the coup in July 2013, President Sisi has been cracking down with unprecedented force on the Muslim Brotherhood, whose party won around 40 percent of the seats in parliament after the revolution and in only a few months became the strongest force in the country. Hundreds, if not thousands, of the party's supporters vanished behind bars, and the Brotherhood was banned and classified as a terrorist organisation.

Should the Sisi regime actually go through with the execution of Osama Yaseen and other prominent Islamists such as Mohamed Beltagy, it will be the first time a death sentence has been carried out on Muslim Brotherhood leaders. In June, Egypt's highest criminal court upheld the death sentences for Yaseen, Beltagy and ten other convicts. "He wants them dead," Omar says with certainty, "especially Osama and Mohamed Beltagy. They are big names in the Muslim Brotherhood." 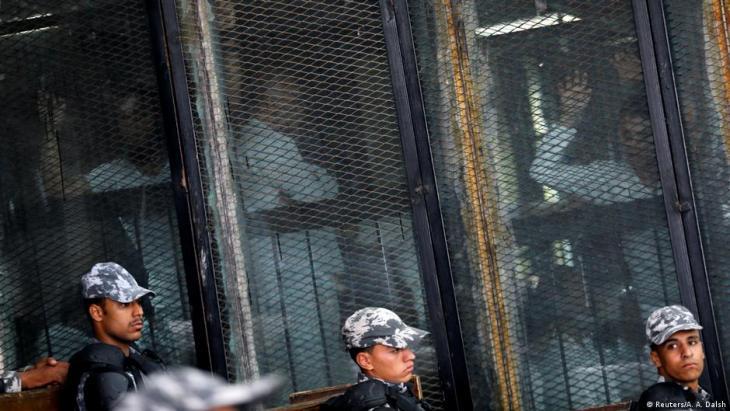 "A total of 739 people were charged, around 400 of whom the court sentenced to several years in prison in 2018, while another 50 or so got life sentences. In June, the Supreme Criminal Court confirmed the death penalty for twelve convicts and life imprisonment for the leader of the Muslim Brotherhood, Mohammed Badie," writes Jannis Hagmann. Pictured here: Members of the Muslim brotherhood in cages during their trial in Egypt

The prosecution of the two prominent Islamists was part of a controversial mass trial. A total of 739 people were charged, around 400 of whom the court sentenced to several years in prison in 2018, while another 50 or so got life sentences. In June, the Supreme Criminal Court confirmed the death penalty for twelve convicts and life imprisonment for the leader of the Muslim Brotherhood, Mohammed Badie.

"The trial was a joke," says Omar, "the charges, the witnesses, everything." To this day, he still doesn't know the exact reason why his relative was sentenced to death. Egyptian human rights organisations that have no connection with the Muslim Brotherhood have likewise criticised the trial as amounting to "retaliation against political opponents of the government under Abdul Fattah al-Sisi." They contend that the public prosecutors are taking revenge in this way on the 700 people who survived the so-called Rabaa Massacre.

After the 2013 coup, thousands of people set up a protest camp on Rabaa al-Adawiya square in eastern Cairo to demonstrate against Sisi's takeover. It was obviously only a matter of time before the camp would be disbanded, but on 14 August, regime forces struck more violently than anyone had thought possible. According to Human Rights Watch, at least 817 protesters were killed, with the actual number "probably more than a thousand".

Today, I wrote to @JamesCleverly regarding last week's execution vericts for 12 Members of the MB for their alleged role in the dispesal of the #Rabaa sit-in. A non-reply to the execution verdict from the British government sends a signal that will be interpreted as complicity. pic.twitter.com/O4AVxRw5ak

In the days following the "Rabaa Massacre", as it has been called ever since, the streets resembled a battlefield. Commenting on the death sentences, British MP Crispin Blunt recently compared the scene to the 1989 Tiananmen Square Massacre in China. Not a single member of the police or military responsible for the bloodbath was brought to justice.

Osama Yaseen and Beltagy took part in the Rabaa protests. Omar thus suspects that his relative has been charged with resisting state authority. "The allegation probably stems from attempts to prevent the deployed forces from breaking up (the camp)." Charges in the mass trial ranged from property damage, to holding an armed assembly, to murder.

No solidarity in the West

No one knows what kind of country Egypt would be today if the demonstrators had managed to prevent Sisi's restoration of military rule. The experiment was put to an end before the Islamists' course was even clear: Morsi had promised to govern democratically and not to touch treaties such as the peace treaty with Israel. At the same time, he also expanded his power by decree and pushed through a referendum on a constitution drafted by Islamists, actions that revealed his authoritarian Islamist leanings.

"It was a transition period; we were in a learning process," a close relative of Beltagy's says today, someone who has likewise left Egypt and wishes to remain anonymous. He admits that mistakes were made, but nonetheless insists: "It was at any rate better than military rule." He fears that no one is concerned that Beltagy's execution could be carried out at any time. "The world is not fair."

Those sentenced can certainly not expect any political pressure from Europe or the USA. As Islamists, they need not hope that the German Foreign Minister, let alone US President Biden, will step in on their behalf. In Germany, news of the death sentences received little attention in the press. All that can be found online is a brief dpa report in the Junge Welt. Omar is frustrated that Sisi's actions have not been met with outrage. "That's hypocrisy; it's not fair," he says.

Amr Magdi of Human Rights Watch puts forward similar arguments: "In short, Sisi's government is in the process of wiping out all potential opposition forces that emerged from Egypt's nationwide uprising in 2011." He goes on to warn: "Today the state is executing Muslim Brotherhood leaders who are not particularly well-known or liked in the West; tomorrow it could execute leftist or secular political opponents."

The numbers are a mystery

The extent of the crackdown on dissent in Egypt is largely unknown. There has been talk of "more than 60,000 political prisoners" – a figure based on a rough 2016 estimate by Human Rights Watch. Of those 60,000, many have probably long since been released, while others have been added. 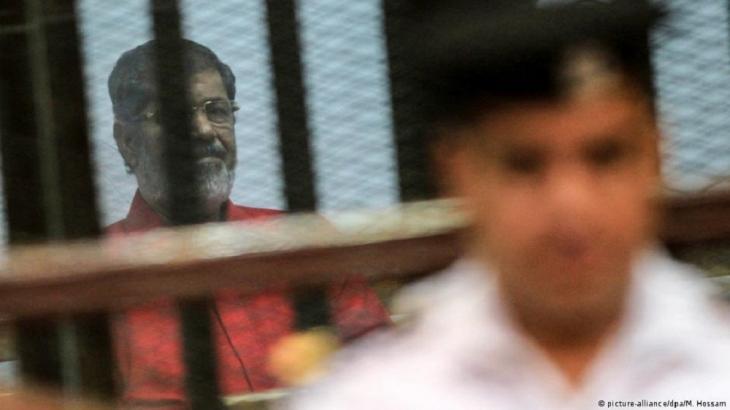 The former Egyptian President Mohammed Morsi (pictured here in an Egyptian courtroom) died during a court hearing in 2019. Morsi was the country's first democratically elected president, coming to power in June 2012. After being ousted by Abdel Fattah al-Sisi, he was put on trial for alleged espionage. A death sentence was commuted to life in prison in 2016

All that is known for sure is that the number of death sentences and known executions is on the rise: in 2020, Egypt's judiciary killed 107 people, three times as many as the previous year. In October, 49 people died in just ten days. However, Egypt does not publish official statistics, so the actual number may be significantly higher.

The Arab Network for Human Rights speaks of around 3,000 death sentences since 2014, although it is unclear how many of these were politically motivated and what share involved Islamists. In an open letter to Sisi, 63 human rights organisations wrote in June: "Since 2014, hundreds of people have been sentenced to death and dozens executed. [...] The sentences are based on coerced 'confessions' obtained through torture." Egyptian human rights activists have censured an "unbridled enthusiasm for politically motivated executions".

The Geneva-based human rights organisation Committee for Justice has classified 159 death penalties during Sisi's term in office as political. The organisation does not distinguish between members of the Muslim Brotherhood and other prisoners. Sixty-three people are currently scheduled for execution, it told Qantara.

Omar still hopes to prevent the sentence from being carried out in Yaseen's case. "I call on everyone to get involved," he says, "because Osama's death is imminent." A reprieve period during which Sisi could still have commuted the death sentences for the Muslim Brotherhood leaders has since passed. "They want to make an example of them," Omar fears.

Tourists have been returning to Tunisia, Egypt and Morocco. But, given the global uncertainty caused by the Ukraine war, will the comeback be enough to save a struggling sector, ... END_OF_DOCUMENT_TOKEN_TO_BE_REPLACED

In this essay, renowned Lebanese journalist and writer Hazem Saghieh asks whether the Arab Levant, which stretches from Iraq in the East to Egypt in the West, will remain an ... END_OF_DOCUMENT_TOKEN_TO_BE_REPLACED

By 2050, the Middle East and North Africa could be dealing with many more elderly people suffering from dementia. A lack of facilities, specialists and local knowledge means the ... END_OF_DOCUMENT_TOKEN_TO_BE_REPLACED

With his fist bump greeting for a man he previously called a pariah, US President Biden has paved the way for Saudi Crown Prince Mohammed bin Salman's return to the international ... END_OF_DOCUMENT_TOKEN_TO_BE_REPLACED

Foresight is needed to turn the tide of German policy. Being independent of Russia must not lead to dependence on authoritarian regimes in the Middle East. By Kristin Helberg END_OF_DOCUMENT_TOKEN_TO_BE_REPLACED
Author:
Jannis Hagmann
Date:
Mail:
Send via mail

END_OF_DOCUMENT_TOKEN_TO_BE_REPLACED
Social media
and networks
Subscribe to our
newsletter